Will the debates finally kill off Trump 2016? The Donald is walking into a disaster

When Trump finally goes face to face with Clinton, that should drive the final nails into his political coffin 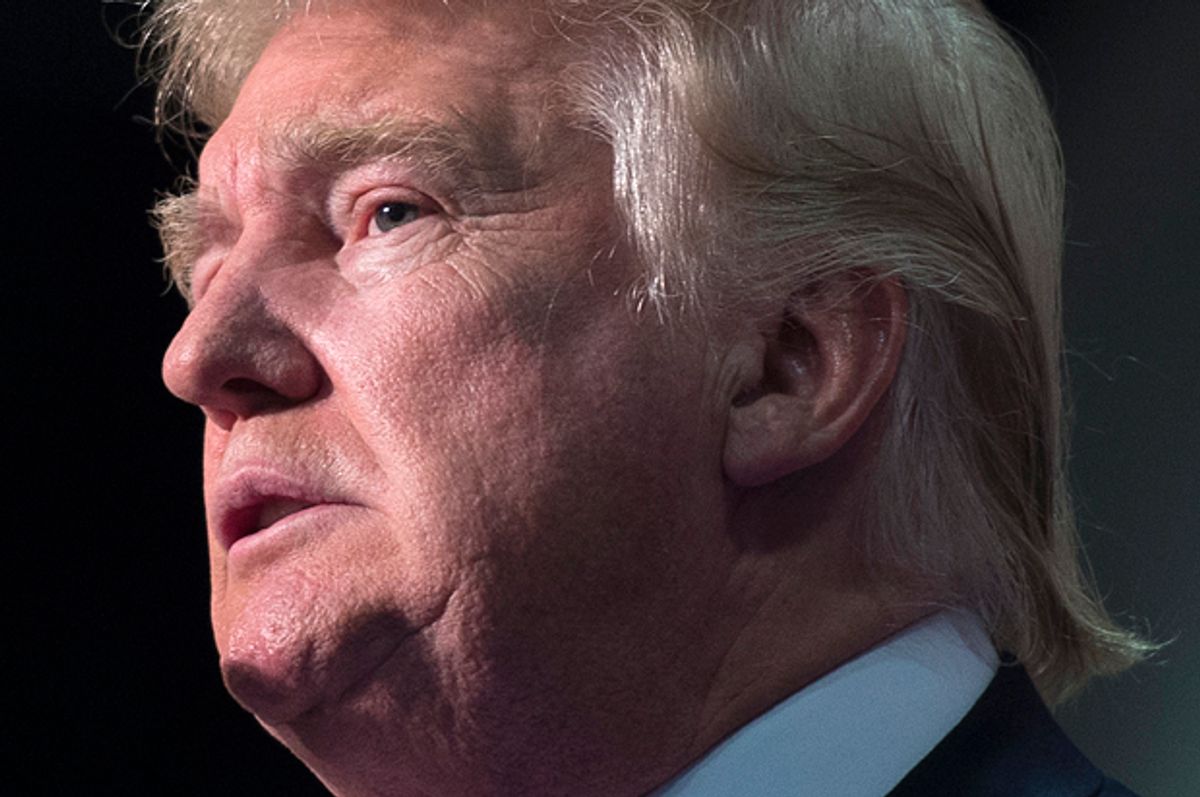 It's perhaps the most highly anticipated presidential match-up in the history of televised debates, and Donald Trump has chosen not to engage in the usual process of holding mock debates or studying briefing books. In other words, Trump isn't prepping to debate Hillary Clinton, with the exception of having lunch with his closest advisers and radio talker Laura Ingraham to discuss the process. The Republican candidate who has somehow managed to bullshit his way through 15 months of campaigning in the same way a slacker in grade-school bullshits his way through an oral exam has chosen to stick with the same debate strategy that served him well during the primaries. That should invites significant peril when Trump finally encounters a one-on-one debate setting with Clinton next month.

"I believe you can prep too much for those things," Trump explained last week. "It can be dangerous. You can sound scripted or phony -- like you're trying to be someone you’re not." There is, admittedly, some wisdom to avoiding over-preparation. But undecided voters, as well as the news media, expect a degree of formality in general election presidential debates, as opposed to the zany Gong Show format that emerged in the Republican primary debates, complete with jarring sound effects and stage sets that utilized every available piece of clear acrylic paneling ever fabricated. It's the difference between a Triple-A baseball game in some third-tier heartland city and a World Series game in Yankee Stadium.

Trump is readying himself for another game show, and such an approach will likely hammer the final nail in his political coffin.

"I know who I am, and it got me here," Trump continued. "I don’t want to present a false front. I mean, it’s possible we’ll do a mock debate, but I don’t see a real need." Realistically, a mock debate doesn't even seem possible for Trump. How do you pretend to bullshit, while preparing to bullshit for real?

Meanwhile, Hillary Clinton is doing exactly the right kind of homework. According to The New York Times, Clinton is consulting with Tony Schwartz, Trump's ghostwriter on "The Art of the Deal," in order to tap into Trump's deepest insecurities, namely "his intelligence, his net worth and his image as a successful businessman." The idea, we can assume, is to bait Trump into saying something obnoxious or damning, while also seizing the initiative against Trump, who will surely pull no punches.

"Trump has severe attention problems and simply cannot take in complex information -- he will be unable to practice for these debates," Schwartz told the Times. But the wild card here is, of course, the reality that Trump's loyalists would prefer that he not suddenly appear on television behaving like a new, more "presidential" candidate. They crave the bullshit. Crave it.

Trump knows what the expectations are from his people. He's too insecure to abandon his greatest hits, which also happens to be why he's never really pivoted away from his existing persona for longer than a few hours. Indeed, many of his white male fanboys watch his speeches and attend his rallies specifically to hear Trump blurt his sitcom-ish catchphrases about building the wall or about "Crooked" Hillary or about how he has "the best words." It's like going to a Springsteen show and expecting to hear "Born to Run." It's what he does and it's what his people expect. Plus, it's easy for him to pull it off. On the other hand, it's much harder for Trump to study, to read binders filled with wonk and to repeat those details in 10 words or less. Too much effort. Too much memorization.

Furthermore, Trump and his team (such as it is) are banking on the idea that there are still poachable undecided voters who will see the televised debate version of his Twitter-trolling shtick for the first time and fall in love with it long enough to carry him to November. If there are undiscovered Trumpers out there, they're either keeping it to themselves or they simply haven't been paying attention enough to know what he's all about. Yes, that's entirely possible, even knowing the obscene volume of uninterrupted airtime Trump enjoys on cable news. Some voters simply don't bother with presidential elections until the debates. Maybe that will work for him, Trump and his staffers have to be thinking.

Unfortunately, the people who wait until the debates to decide whom to vote for also tend to be hyper-serious about their choices once they finally engage with the process. Most undecided voters expect decorum and presidential behavior on television, as do the moderators, who will absolutely not include Trump-friendly doormats like radio host Hugh Hewitt or Fox News' Bret Baier.

At the same time, we know for a fact that Hillary Clinton is a good debater. Delivering a stump speech isn't her strong suit, but bear in mind, however, that she almost always topped Barack Obama during the 2008 primary debates, and also did well against Bernie Sanders this year. Clinton also knows how to bear down and get tough when necessary. How can she not? She's been swatting down feral political opponents for 30 years. Especially during foreign-policy exchanges, Trump will likely deal in sweeping bromides about how Clinton is the leader of ISIS and how we'll make NATO countries pay for our support, etc, while she will appear at ease discussing foreign policy in a way that isn't too wonky, yet will be wonky enough to underscore that she's the only expert (and the the only potential president) on the stage. Trump will try to interject debunked accusations about Benghazi, or demand that she apologize to the families of those killed in that attack. Unless he couches it in an unexpected rhetorical flourish that fires up his base, that will likely be a losing strategy.

But given how often Clinton has fielded such attacks, including her masterful handling of an 11-hour grilling in Congress, it's unlikely she'll be shaken. And it's exactly that kind of performance that will draw in more undecided voters than Trump's predictably unorthodox improvisation. This is all to say that the less Trump prepares for the upcoming debates, the better off the world will be.