Some alt-right Trumpians truly want to destroy liberal democracy; others just want a front-row seat at the circus 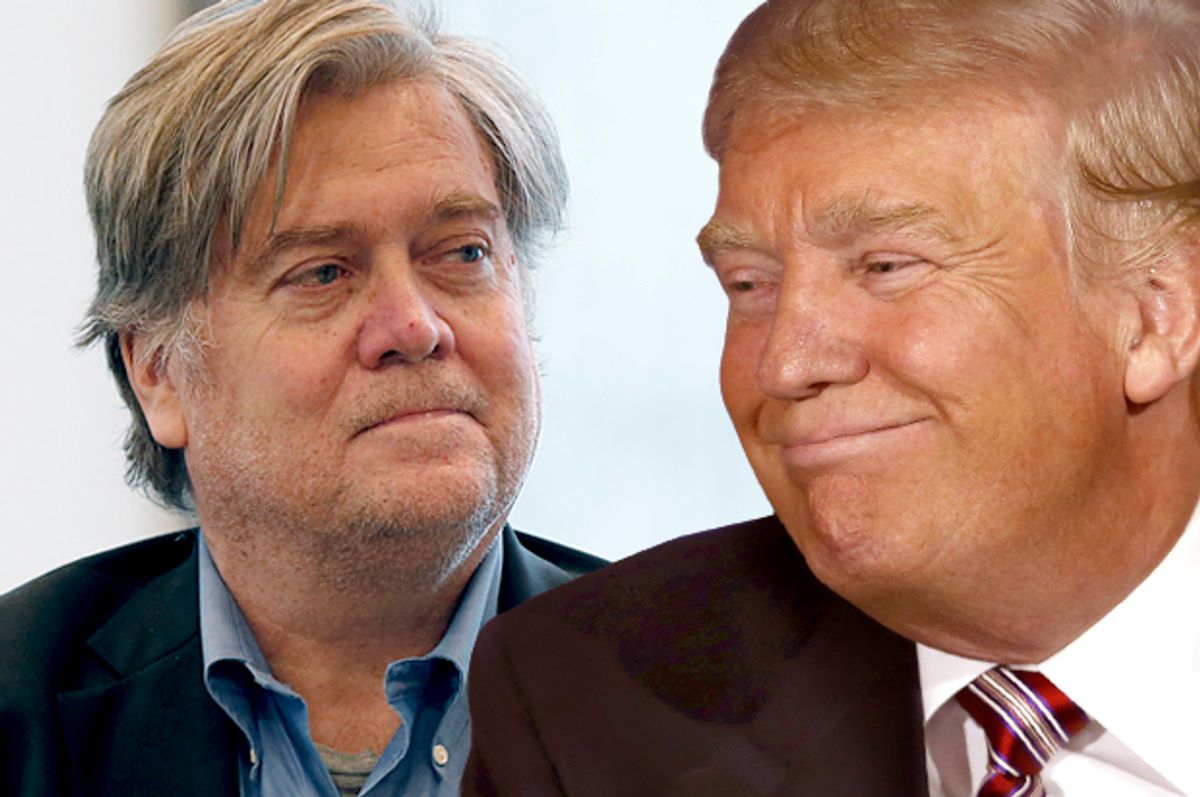 After Donald Trump named Stephen Bannon, head of the right-wing political website and Trump propaganda outfit Breitbart News, as his new campaign CEO earlier this month, advocates of the increasingly popular “alt-right” movement — which Breitbart has championed over the past year — were more than a little jubilant. “His appointment is great news,” said Peter Brimelow, editor of the white supremacist website VDARE, to the Daily Beast, while Richard Spencer, president of the National Policy Institute, an overtly racist think tank, praised Breitbart as a “gateway to Alt Right ideas and writers.”

Last Thursday, about a week after the hiring of Bannon, Democratic nominee Hillary Clinton denounced the alt-right at a campaign rally in Reno, Nevada, declaring that “the de facto merger between Breitbart and the Trump campaign represents a landmark achievement for the ‘Alt-Right.’” A fringe element, continued Clinton, “has effectively taken over the Republican Party.”

Predictably, those who identify with the alt-right were, once again, ecstatic with the publicity that their onetime fringe movement was receiving.

The alt-right, which the Southern Poverty Law Center defines as “a set of far-right ideologies, groups and individuals whose core belief is that ‘white identity’ is under attack by multicultural forces using ‘political correctness’ and ‘social justice’ to undermine white people and ‘their’ civilization,” has grown into a popular buzzword over the past year alongside the Trump campaign. For politically inclined social media users or Redditers, the term denotes Trump-worshiping trolls who regularly harass women and people of color on Twitter and Tumblr, and who embrace the billionaire’s apparent stands against political correctness, feminism, and multiculturalism, as well as his strongman personality.

Broadly speaking, the alt-right is a big tent movement characterized by an intense disdain for liberalism, egalitarianism and feminism, and a shared affinity for white supremacy, nationalism and authoritarianism. There are various ideologies and groups that fall into the alt-right classification, but for practical purposes the movement can be divided into two categories. First there are the bona fide far-right extremists one could call the true believers: white supremacists, neo-Nazis, “neoreactionaries” — who all genuinely believe that the white race is superior or that there is a conscious liberal plot to annihilate the white race and destroy Western Civilization (i.e. “white genocide”). Then there are the trolls, who loathe political correctness and feminism but primarily post despicable racist and sexist comments online in order to provoke and offend the so-called “Social Justice Warriors.” These trolls may or may not be genuine racists or white supremacists, but they are cynical and amoral opportunists — much like their hero Mr. Trump.

The infamous Breitbart provocateur and alt-right darling Milo Yiannopoulos falls into the latter category, and in an article on the alt-right, he compared its trolls to “kids of the 60s [who] shocked their parents with promiscuity, long hair and rock ’n’ roll.” Like transgressive beatniks and hippies, the “alt-right’s young meme brigades shock older generations with outrageous caricatures, from the Jewish ‘Shlomo Shekelburg’ to ‘Remove Kebab,’ an internet in-joke about the Bosnian genocide” (because anti-Semitism and white supremacy are so very original!). These trolls who contaminate social media with racist bile are, according to Yiannopoulos, no more bigots “than death metal devotees in the 80s were actually Satanists.”

On the other hand, there are the alt-right’s true believers, like neo-Nazis and white supremacists at the Daily Stormer and StormFront (sites that have become increasingly popular with the rise of Trump), or — perhaps the most bizarre alt-right faction — the cultish “neoreactionary movement,” also known as the “Dark Enlightenment.” These curious new arrivals are pro-monarchist futurists who identify as “race realists” (i.e., they promote pseudo-scientific theories used to justify racism), and seem to believe — like a classic Ayn Rand hero — that their genius has been unfairly overlooked in a society of parasites and underachievers. (Hence their contempt for democracy and egalitarianism.)

So then, those are the trolls and the true believers

But where does Trump’s new campaign chief fall in the alt-right typology? According to conservative writer and professor Ronald Radosh, who met Bannon at a book party in 2014, the Breitbart chairman describes himself as a “Leninist.” What did he mean by that? “Lenin wanted to destroy the state, and that’s my goal too,” Bannon reportedly told Radosh. “I want to bring everything crashing down, and destroy all of today’s establishment.” Bannon also described the conservative publications National Review and the Weekly Standard as “left-wing magazines” that he wanted “to destroy” as well.

This destructive attitude, which evokes the Russian nihilist movement of the late 19th century (which, coincidentally or not, also influenced Vladimir Ilyich Lenin), has also been endorsed by Yiannopoulos. He told conservative writer James Kirchick that Trump supporters don’t care about the billionaire’s policies; they just “want to burn everything down.”

Thus it appears the alt-right is united by a kind of political nihilism. The true believers want to destroy liberal democracy in order to bring forth a new fascist regime or re-establish the feudal absolutism of the Dark Ages. The trolls simply get a kick out of watching the world burn. As for Donald Trump, he seems to believe in very little, ideologically speaking, and must be regarded as a troll himself. Like his minions on Twitter and Tumblr, Trump likely experiences some kind of twisted pleasure with each abusive tweet and shameless provocation.