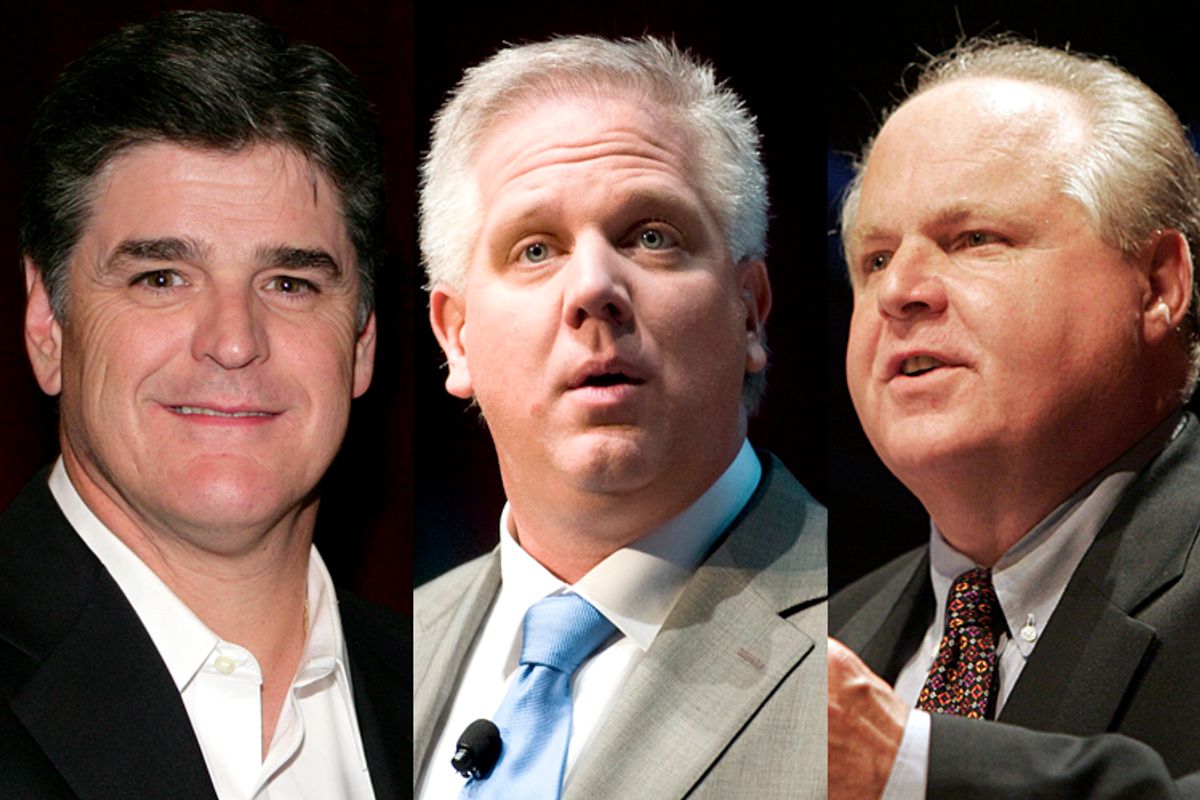 Although the GOP primary effectively ended more than four months ago, the frosty relations between previously friendly right-wing media figures who had different preferred candidates is just now beginning to heat up into what Fox News Sean Hannity described as "holy war."

On Tuesday, Hannity struck back, slamming The Blaze founder and other prominent right-wing media figures who refuses to back the GOP nominee.

“So here’s what I say to all of you Never Trumpers — Glenn Beck, I hope you’re listening.  You own Hillary Clinton’s Supreme Court appointments. You own it! You are doing everything you can do to cast doubt in people’s minds!” Hannity said on his radio program.

"Yeah, I'm going to name names," he threatened before continuing to berate his fellow conservative commentators. "I'm not sitting here and wimping out. I know there are people out there blaming me."

"You own Hillary Clinton. National Review, you own it. Glenn Beck, you own it. Ted Cruz, you own it ... She wins, I'm blaming all of you," Hannity, perhaps Trump's most enthusiastic Fox News mouthpiece said. "You own all of her policies."

For his part, Beck was quick to respond to Hannity's assault with an attempt to calm the conservative waters, as it were, on his Blaze show Wednesday. Here is his full response from Business Insider:

"However, I won't echo the past of others. What I will say, and I want to have a conversation, and I want to share something that I wrote to Mark Levin this morning, and I won't tell you our exchange back and forth. He is not picking sides. I encourage everyone — if you are a fan of mine — do not pick a side, please. Do not get involved in this. Please. Don't condemn Sean or anyone else. I truly believe Sean is doing what he feels he needs to do. Just as I am.

"And I have told you for months that there are no more good choices. I am not happy with what I'm — what I believe I'm forced to do. But my principles dictate that where I stand. And you will understand that, as I read what I wrote this morning, and where my mind is. You can condemn if you want. That's fine. I expect it. Don't condemn him. Please. The pressure on this job, the pressure on him, is enormous. Enormous! I truly believe he is trying to do the right thing. We just strongly disagree.

"First of all, I wish this show [had] the power to elect a president. Because President Cruz sounded very good to me. I couldn't, and no one on this show, and Jonah Goldberg, and all of the things that he just listed — we could not get the most constitutionally minded conservative of perhaps the last 100 years, the guy we believe we waited for and prayed for, to get elected. But somehow or another we are going to be responsible for the defeat?

"I am not going to blame Sean or anyone else for helping to nominate a GOP candidate that was a Democrat, I think, last week. If Sean is a believer, if he believes that Trump is a reliable conservative, he knows him, I don't. I don't believe him. Sean does. I don't lay the blame at his feet. If Sean believes that he can ascribe a logical line through Trump's positions and that even know what Trump's positions are — OK. If Sean believes that Hillary Clinton believes anyone — and I do mean anyone is better, I don't blame him. I would like him to say that. That anyone is better. Anyone."