"Having it all" is impossible: What women really need is balance, fairness and respect 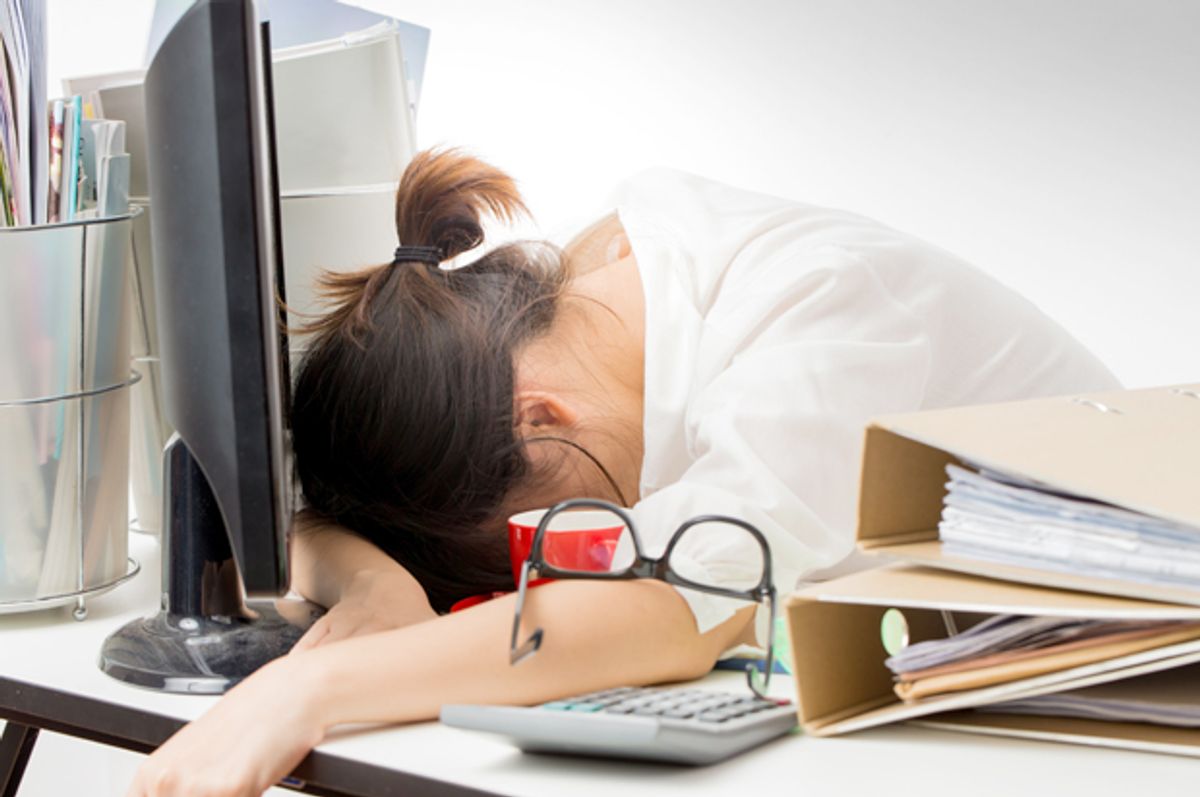 Our culture is coming to a crossroads over the issue of work/life balance, but this time, it's not about the mythical ideal of women "having it all" but instead, about how we grapple with the fact that it's impossible for anyone, male or female, to have it "all." Why? Because we all get only 24 hours a day, and at a certain point, we have to choose between work, family, socializing, resting and whatever other ways we choose to spend our time. When couples have differing value systems when it comes to either time or money, it highlights some of the cracks in the myth that there's any one perfect way to structure our relationships. While I do believe in the general goal of everyone contributing equally, what we're seeing now is that in practice, this concept often gets very, very messy.

Recently published at xoJane (a site I’ve contributed to), notorious for its clickbait headlines, is an essay by Carisa Peterson titled “Feminism Has Enabled My Husband to Be Lazy and Selfish.” In it, Peterson details her grievances over the fact that while she busts her ass to work hard to support her family, her husband, in her opinion, is far from doing his fair share.

“He snowboards, he races cars, he skateboards. I work, and then I work on doing more work by writing, and then I work on opening my own work, having gotten as far as I can with limited income and limited time to investigate a few select entrepreneurial storefront business ideas all as a means of buying myself more time to be with and take care of my husband and children, which is all I ever really wanted to do in the first place. (Shhh — don't tell feminism). In other words, I do what I must to try to ensure my family's survival and my children's eventual success as responsible human beings.”

Peterson goes on to write, “I don't have a choice, any more than the women who felt like they were chained to their KitchenAids did, but they got to build an entire movement around it. I guess I just never thought that feminism, in allowing me to freely work to help support my family, would enable my partner to opt out of doing the same — and at the expense of my own interests and hopes for our family.”

Aside from blaming feminism for her problems, Peterson is also identifying a dissatisfaction with both her own marriage and its contrasting work ethics (though a job consisting of drudgery you hate is still going to suck, whether you're partnered or not).

At the heart of her piece isn’t just her frustration over a job she dislikes, or the fact that she doesn’t have as much time with her kids as she desires, but that her husband isn’t even remotely appreciative of her efforts. “I could not feel any more disrespected as I run around stuffing the kids into the car on subzero-degree snowy days just to get them into daycare so that I can go to work while my husband books the occasional ski lesson in his socks while our home is practically crumbling down around us…” she writes. To me, this is the true problem: not that men shouldn't be stay at home dads, or that only men should be breadwinners, but that if there is a stark contrast between who works the most hours, each person should feel that they are bringing something useful to the table. In Peterson's case, her husband is likely frustrated with his situation as well, having shifted from an upper management position to working, in her words, "full-time from home for part-time income as a travel reservations agent." (In a followup xoJane piece, Peterson defended roping in feminism into her specific story, saying she was trying to shine a light on a larger issue.)

Peterson calls the fact that her husband is allowing her to shoulder the burden of responsibility as a "loophole in the feminist movement," when in fact it's the opposite. Second wave feminism in particular, which helped pave the way for women's access to education, jobs, bank accounts, etc., was never about simply reversing roles and having women do all the work, in and outside the home, while men happily partied and shirked their duties. It was, and is, about evening the playing field, something that Hillary Clinton has played up in her campaign, including in a piece posted Wednesday at Popsugar where she highlighted the need for better protections for working mothers.

But this issue of how couples balance work and home and respecting each sphere is not simply an issue that male/female couples face. Contrast Peterson’s take with my friend Jenny Block’s argument over at YourTango, where she takes a decidedly opposite tack: that those who work from home, in whatever capacity, should be valued for what they provide, even if they aren’t compensated financially for it. Block is a writer who works from home, and also takes on housekeeping duties, while her female partner ventures out into the corporate world to support them. “But my being home eases the chore urgency. Things are in order when she returns from the mayhem. And her gratefulness makes me feel happy and loved and like my contributions are as important as hers. She says knowing I'm here burning the home fires makes all the crazy travel and work stress worth it.”

While of course there’s a huge degree of privilege in her essay, entitled “I’m A Feminist And I Don’t Think Women Should Have To Work,” there’s also a kernel of truth: that many women, unlike Block, don’t feel valued for their contributions to home and family, whether or not they also work outside the home. Rather, I suspect many, like Peterson, feel that the utopian version of “having it all” has morphed into “doing it all,” with nary a “thank you” in return. As Block puts it, “We value jobs that in the past, have been traditionally male and make it seem as if doing those jobs (preferably in the ruthless way men traditionally do them) is to be praised, while choosing things that are traditionally female is to be dismissed. We have it all backwards.”

One of the other problems we're facing as a society is that women are choosing to take on a deliberate overload, whether to assuage guilt or because they don’t want to be seen the way we’ve too often viewed Hillary Clinton: as someone only interested in pantsuits and policy, never keen on baking cookies. This is a false dichotomy Clinton played into herself, much to the chagrin of stay-at-home moms.

In real life, women and men care about both the professional and personal realms, but it's often women who race to outdo each other in who can be not only "do it all," but having it looking perfect, something "Odd Mom Out" creator Jill Kargman satirized perfectly in her novel "Momzillas." As Jessica Grose wrote in a Lenny Letter essay on maternal guilt, "instead of acknowledging that kids can thrive with various kinds of caregivers, we seem to have decided that the ideal mother is some unholy hybrid of Marissa Mayer and a Mormon mommy blogger. The culture is telling women: you need to be leaning in as far as you can at work and creating a Pinterest-perfect family tableau at home, replete with foraged-pinecone centerpieces and smiling tots happily eating their homemade quinoa cakes."

Do I have the answer to how women like Peterson can earn their partner's respect and ease their workload? No, but I do think it's important to talk about what our practical expectations are around money and work before we marry or partner with someone else. That's why I was pleased to see single 22-year-old graduate student Martina Paillant, who only dates men with credit scores of 700 or higher (out of 850), profiled in the New York Post. Paillant said that she asks by the fourth date about the man's credit score, so she can rule out guys who don't meet her standards. "I was raised in a family of professionals who keep their finances in check and taught me how to handle my money. I have no student loans and I can already take care of myself financially. I need a man who can take care of himself, too," said Paillant, whose own credit score tops 800.

Imagine if all of us had similarly specific standards around what we want from a mate, and wouldn't take anything less. I say that even though, had my current boyfriend had such standards, he never would have given me the time of day, given that I'm currently inching my credit score upward from the low-600s. What's admirable about Paillant is that it's unlikely she will ever find herself in a situation like Peterson, feeling trapped in a situation where she loves her partner but resents their lackadaisical approach to money and work. We all need to get clear on what those minimum requirements are, both for ourselves and how we divide our time, and our partners. There's no single right way; some may opt to have roommates to save money, or live in a cheaper area of the country to lower their cost of living, in order to have more time to do the things they want, while others might work 80 hour weeks to live in the heart of a big city. Any of those options are fine, except when one half of a couple resents the other half, which isn't a recipe for happiness on anyone's part.

Block is able to proudly proclaim, "Staying at home is my honor and my delight, not my burden," because her partner also honors her, and doesn't resent being the one to head out the door every morning. That solution won't work for all relationships, but everyone deserves to feel valued and honored for what they do contribute to bettering both party's lives.