Even though we know how Escobar's story ends, Moura's portrayal makes season 2 into a journey worth taking 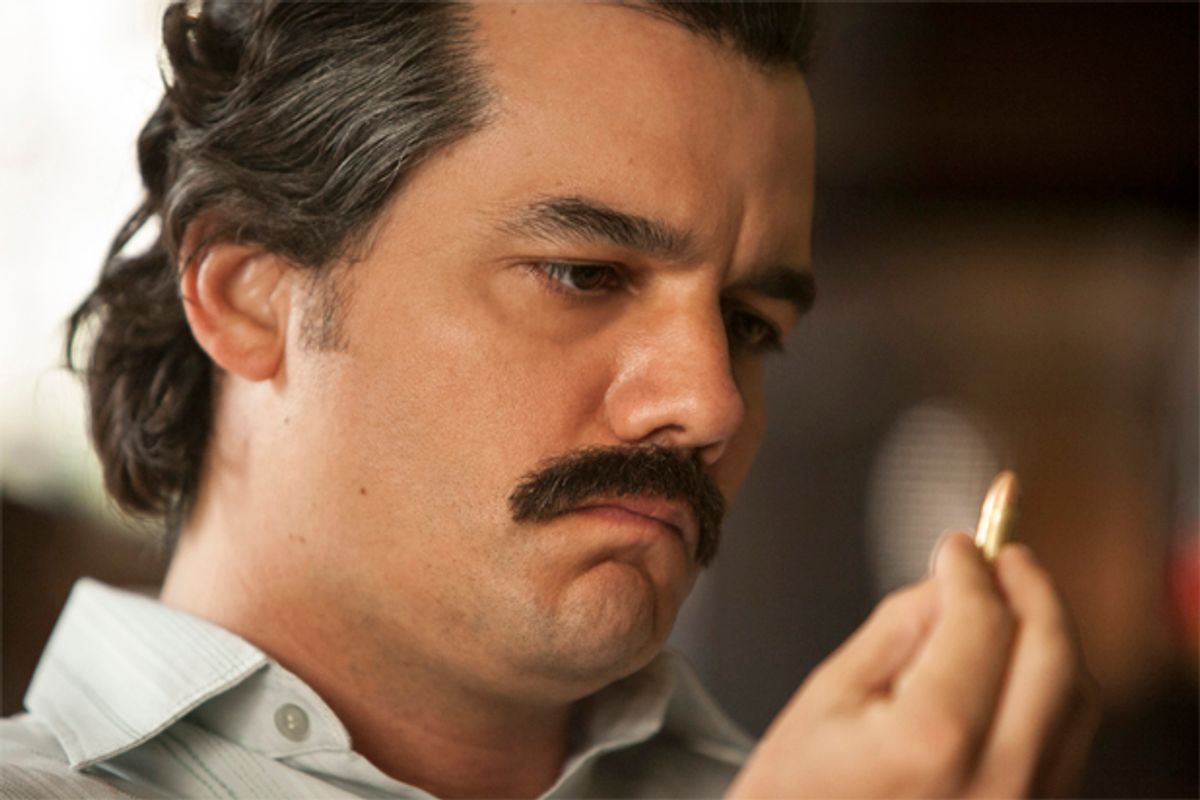 Fictional series inspired by history have altered the idea of what it means to be “spoiled.” Most of us know the outcome of the story; for those who don’t, there’s always Google.

The best of these are capable of playing with our anxieties nevertheless, and that's certain true of Netflix’s “Narcos,” which follows cocaine kingpin Pablo Escobar’s ruthless climb.

“Narcos” is not an easy sell; the average viewer wasn’t exactly clamoring for a blow-by-blow look at the DEA’s struggle to slow down the Colombian drug trade in the 1980s and early '90s, not to mention in a show dominated by Spanish dialogue with English subtitles. But those who endured the drama’s unwieldy first season, and exercised patience with the drama's DEA agent narrator Steve Murphy (Boyd Holbrook), were rewarded in full with Wagner Moura’s engrossing portrayal of Escobar.

Whether the producers planned to bait-and-switch us with the starring roles is subject to debate; the streaming service has pulled that trick before with “Orange Is the New Black.” Would most people have invested in the stories of minority female prisoners if an upper-middle class blonde had not acted as their Virgil? Doubtful. Similarly, “Narcos” viewers may have entered into the story to see what Holbrook’s drug cowboy had to offer, only to discover that the most engrossing figure of the series is, in fact, Moura’s kingpin.

Murphy remains a central figure in season two, of course, as does his partner Javier Peña (Pedro Pascal). But if Moura subtly eased into the foreground over the drama’s first 10 episodes, his Escobar is the unquestionable hub around which “Narcos” spins in the second season, and the show is markedly improved because of that.

Season two feels much more assured in its execution than the first, partly owing to the story’s shorter timeframe. Where the first ten episodes comprised a journey that began in the late ‘70s and continued through 1992, the show’s latest chapter covers the action between the first season finale and the end of 1993. Most people know that Escobar's reign did not end cleanly or peacefully, but that's beside the point. Moura's work is compelling enough to make it worth our while to accompany Escobar once again as the show picks up where it left us, with the drug lord's tense escape from his so-called prison, La Catedral, as government forces closed in.

A great deal happened in the year after Escobar left his stronghold. While the army’s failure to apprehend Escobar betrayed its weakness, other cartels saw an opportunity to knock off their most powerful competition. The war escalated, and as Escobar’s influence waned he became increasingly erratic and more dangerous.

As fascinating as it can be to watch the ascendance of a monster such as Escobar, the fall can be even more captivating. Escobar’s final tumble was relatively quick, violent, and left a highway of carnage behind him. Faded evening news footage, some of which is interspersed within each episode, includes glimpses of death squad victims, the aftermath of retaliatory car bomb explosions, and bodies of cops slain in the streets.

But the greatest strength of these new episodes lies in Moura's expansion of his character's portrait, allowing us to contemplate the chilling dichotomy of Escobar's personality. He doesn’t shy away from embodying the frowning brute who erupted in violence and terrorized his foes, but he’s also convincing as he plays Escobar as the loving, dedicated husband, or the gentle father who gifts bunnies to his daughter.

To the actor's credit, there’s never a moment when the viewer forgets she's watching the story of a murdering ogre, even as one comes to realize that it’s Escobar’s love that's ultimately his undoing — love of power, money, danger and ego, as well as his passionate regard for his wife (Paulina Gaitán) and their children.

History may have spoiled the ending of the current season. If it hasn’t, Moura’s widely reported confirmation that he won’t be back for season three betrays a clue of where Escobar’s journey ends. This is a show that was built to live beyond any individual; its title, “Narcos,” doesn’t refer to a specific person, and series executive producer Eric Newman has said that the show can keep on going for as long as there is cocaine in the world.

Newman has a point — kingpins come and go, but the product keeps on flowing. But unlike the man he played, Moura's presence in this series will certainly be missed, and that’s a pressing issue for “Narcos” to solve if it intends to continue engaging us with its drug war.