The non-nuclear option: The most urgent threat to human civilization isn't Trump

Why should anyone’s finger be anywhere near a nuclear trigger? 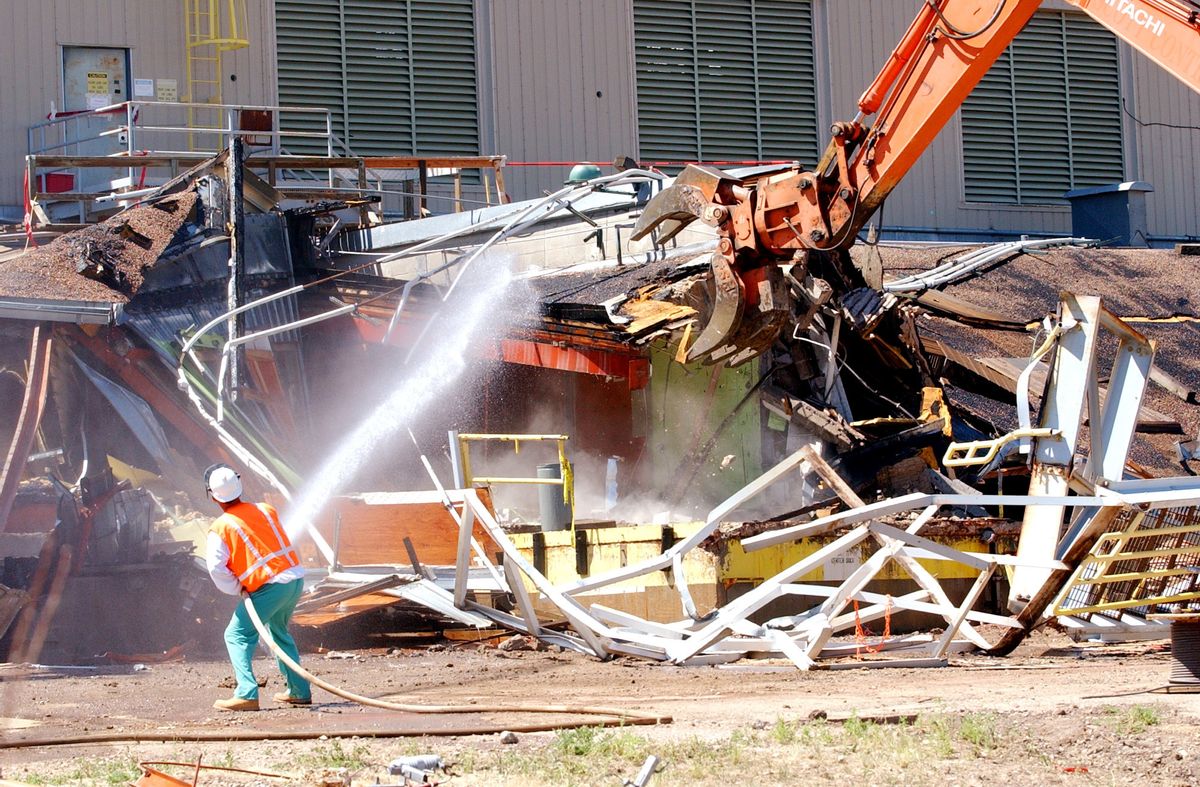 FILE--In this July 15, 2004, file photo a worker sprays water to keep down the dust as a giant claw on an excavator rips apart Building 771 at the former Rocky Flats nuclear weapons plant near Golden, Colo. Attorneys say they reached a $375 million settlement late Wednesday, May 18, 2016, in a legal battle between the operators of the former nuclear weapons plant outside Denver and thousands of homeowners who said plutonium releases from the plant hurt their property values. It must still be approved by a federal judge, and it could take months to set up a process for homeowners to file claims. (AP Photo/Ed Andrieski, file) (AP)
--

Hillary Clinton hasn’t said much about the most urgent threat to human civilization. No, not Donald Trump. Nuclear weapons.

She did say this about Trump on June 2: “[Trump] is not someone who should ever have the nuclear codes. It’s not hard to imagine Donald Trump leading us into a war just because somebody got under his very thin skin.”

If you’ve even casually taken note of Trump’s volatility, you’ll find it beyond reasonable to ask how close his finger should be allowed to the “nuclear button” or “nuclear trigger” or “nuclear codes.” (No one with my level of security clearance — i. e., zero — knows just what to call these things, but the general idea is a command to launch nuclear weapons.)

But don’t stop there. The further question is whether anyone’s finger — anyone’s — should ever get close enough to order American nuclear forces to launch the most destructive weapons in the history of the world.

Right now, American policy is to reserve the right to launch first — that is, before the president has reason to think that nuclear weapons have actually been loosed upon the United States; that is, in the absence of any hard evidence that a bomb has actually detonated.

If you go to Clinton’s website, look under “Issues,” and hit the button (sorry) for “Military and defense,” then search for “nuclear,” you’ll come up blank. Hit the “National security” button and you’ll come up with three mentions. Two pertain to Iran, which has been prevented from developing any nuclear weapons. The third is this: “She worked to ensure ratification of the New START treaty, which will make the world safer by reducing U.S. and Russian nuclear arsenals to their smallest size in 50 years.”

But there are still 14,600 of them in the hands of the great powers. Not counting what China, the United Kingdom, France, China, Israel, India, Pakistan and North Korea have.

To date, Clinton stands mute on what her husband’s own former Secretary of Defense William J. Perry said in February: “the likelihood of a nuclear catastrophe today is greater than it was during the Cold War” and most people are “blissfully unaware” of this danger. Even a single nuclear detonation, Perry says, “could destroy our way of life.”

Does Clinton avoid broaching it because she doesn’t want to look soft, or because she’s afraid to scare the bejeezus out of the country by noting that it is currently American policy to reserve the right to launch nuclear weapons first, either because a nuclear state goes to war with the United States with any weapons at all, be they nuclear or conventional, or because the non-nuclear ally of a nuclear state does? For despite a constructive change to American nuclear policy declared in 1997 by Bill Clinton, this remains, so far as anyone knows, American policy.

Is it outlandish to think that this could never happen? Watch the PBS documentary "The Man Who Saved the World" and read Professor Martin J. Sherwin’s account of the Soviet submarine incident of Oct. 27, 1962, and think again.

The man who saved the world that day was a 34-year-old Russian naval officer named Vasili Arkhipov. Five days into the Cuban missile crisis, an American task force located four Soviet submarines at the blockade line near Cuba. Unknown to anyone in the US chain of command, one torpedo on each sub was equipped with a 15-kiloton nuclear warhead, equivalent to the bomb that obliterated Hiroshima. With its 12-mile range, Sherwin writes, “if fired, it could easily sink several ships, an act guaranteed to trigger a nuclear response.”

Arkhipov had been assigned at random to one of those subs, designated B-59. The Americans were dropping depth charges and (unauthorized) hand grenades to signal it to surface. The sub was no longer receiving information from Moscow headquarters, and now that it was taking evasive action, it was too far underwater to receive radio signals. “It felt like you were sitting in a metal barrel which somebody is constantly blasting with a sledgehammer,” Senior Lt. Vadim Orlov, the communications officer on B-59, said later. “The situation was quite … shocking for the crew.”

The B-59 crew was reaching a panic state. They had no air conditioning. Temperatures in the coolest part of the boat reached 113 Fahrenheit, and in the engine room, 140. The desalinization equipment was malfunctioning and fresh water was in short supply.

The submarine captain thought nuclear war had already broken out, and it was time to launch the sub’s own nuclear torpedo. The top political officer on board agreed. But the sub was operating under an unusual rule: Because Arkhipov, the flotilla commander, was aboard, all three senior officers would have to agree to launch.

Arkhipov was not convinced. Why not wait and see? He persuaded the captain to surface and await word from Moscow. Once on the surface, the sub’s commanders learned that war had not begun. But they had come within a hair’s breadth of starting it themselves.

And you might wonder why Clinton hasn’t said on her website or, so far as I know, anywhere else, “I will be the last to use nuclear weapons.” Someone needs to ask her. Former Defense Secretary Perry has placed on his website an article by Thomas Collina with this apt headline: “America Would Never Be the First to Use Nukes. So Why Say We Might?”

The United States keeps much of its nuclear arsenal on high alert, ready to launch on warning of a highly unlikely “bolt from the blue” Russian attack. Not only is high alert at odds with no first use (if we are not planning to use them right away, why are they ready to use right away?), but it puts insane time pressure on the president to make a launch decision within minutes. By taking U.S. weapons off alert and declaring that he would not launch on warning, President Obama would reinforce no first use and have much more time to make such a monumental decision.

And this is not even to explore the nightmare question that Ron Rosenbaum wrote about in his barely noticed 2011 book, "How the End Begins." When an officer in command of a nuclear launching hears a voice that sounds like the president’s say, “Launch,” how can he be sure that it’s the president on the other end of the line?

So why do we talk blithely about “nuclear modernization?” Why do we need vulnerable land-based nuclear missiles and bombers when we have well-nigh invulnerable nuclear submarines? (The whole three-part apparatus is known as “the nuclear triad.”) In the only serious review that William Perry’s new book, "My Journey at the Nuclear Brink," has received, California Gov. Jerry Brown notes:

If the election campaign is supposed to ascertain how people feel, more or less, about the burning issues of our time, aren’t these matters worth some discussion — regardless, that is, of whether or not the former secretary of State ever emailed about them?