A modest proposal: Trump has it all wrong — to prevent crime, we need to do some "exteme vetting" of men

If we need a police state to stop crime, the target shouldn't be immigrants but those commiting most crimes: men 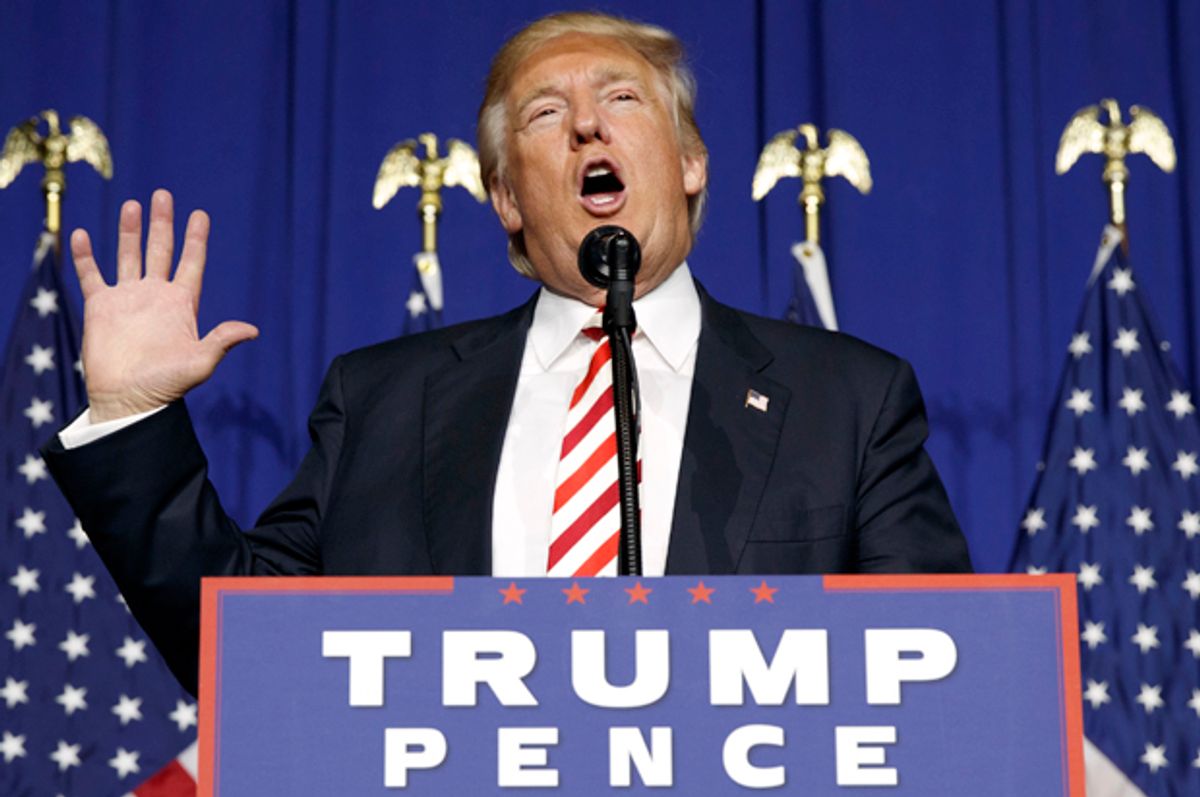 Donald Trump's alarming speech on Thursday night was built around the claim that immigrants are a uniquely terrifying source of murder and mayhem and therefore, in the name of self-defense, the U.S. should expunge undocumented immigrants and narrow the standards for legal immigration.

The problem with his argument — which is barely an argument and more a bunch of right-wing buzzwords expectorated at top volume — is that immigrants, undocumented or not, commit crime at lower rates than native-born people.

There are, however, two groups of people who really do commit crime, especially violent crime, at wildly different rates: Men and women.

If Trump is right and the crime rate is serious enough of a problem to compel us to abandon basic human rights so as to subject certain groups of people to monitoring and legal intimidation, then it's not immigrants we should target. It's men.

Trump argued that all "energies of the federal government and legislative process" should be geared toward preventing immigrant-caused crime through extreme police-state measures — monitoring, draconian punishments, mass deportations, that sort of thing. The problem is that doing this won't do much to reduce crime, since immigrants aren't committing crimes in disproportionate numbers.

But if we took that police state model that Trump is suggesting and applied it to men, well, say what you will about squishy liberal values like respect for human rights and the concept of  "innocent until proven guilty" and "not holding all members of a group accountable for the actions of the few," but it's hard to deny that this would significantly reduce crime.

Using Saudi Arabia, which has really perfected gender apartheid, as an inspiration, I have crafted a 10-point plan, aimed at controlling men, that Trump should embrace if he's really serious about preventing crime at all costs.

1. Chaperoning. No man is allowed to leave the house, even on simple errands, without a female relative to chaperone him. It can be his wife, sister, mother or even sister-in-law, so long as there is proper documentation to show that this woman has the authority to mind him while he's out. It's hard to rape and murder people with your mom watching you.

2. A driving ban. We know that male criminals frequently use cars to escape a crime scene, and in some cases, like drunken-driving accidents (which men cause at twice the rate for  women), the vehicle is the instrument of the crime. Given men too much accelarating power makes it too easy for men to indulge their criminal urges. They can either get a ride from a woman or take the bus.

3. Guardianship. Men shouldn't be able to get jobs, go to school or leave the country without the permission of their female guardian. This precaution will keep them from socializing with other men who are unknown by their female guardian, as this activity is a known precursor to criminal activity. Men will be banned from leadership positions as well because they can't be trusted to deal fairly and strictly with their fellow males who commit crime.

4. A ban on nonmarital sex. Men commit nearly all rapes, but they often get away with it because they simply claim that the sex was consensual. Banning nonmarital sex solves most of the he-said, she-said problem. Men will definitely be motivated to make sure a woman doesn't feel violated by a sexual encounter, if she can get him 40 lashes with an accusation of fornication.

This ban, like all bans on this list, will be for men only. Women have proved they are more responsible, by committing less crime, and can be trusted to make their own decisions.

5. Modest clothing. Under the new law, men will be required to wear heavy robes that cover everything but their hands and face. They will don head coverings so that no one can see hair or a bald spot. It is very hard to rape someone if you have to spend an hour removing your clothing. It's also hard to flee from a crime scene if you're tripping over your robes. Most important, making men look ridiculous will discourage their showing off for their bros, which leads to all sorts of criminal mischief, from vandalism to bar fights.

As a side benefit, this will rid the world of cargo shorts, aviator sunglasses and backward baseball caps.

6. A ban on congregating in public. During his speech, Trump railed about how "the gangs are all over the place." Most gang members are not immigrants, but most of them are male. Under the new law, all-female police forces will roam the streets, making sure that any group of men larger than three individuals is dispersed immediately to prevent the formation of gangs.

7. A ban on bank accounts. Money is the reason men commit a lot of crimes. If they can't have any of their own, that should dampen their enthusiasm for stealing.

8. A ban on drinking alcohol. Male consumption of alcohol is a factor in a whole mess of crimes, especially rape. From here on out, only women will be allowed to drink. Married men will be allowed one glass of wine at dinner, if their wives allow it.

9. A ban on overly masculine pop culture. There are entire swaths of pop culture that only men really seem to like and this probably means that these art forms contribute to crime. As a precaution, they will be banned.

Rap rock, dubstep and Rush records will be the first to go.

On the highbrow end, all independent dramas that feature a young man falling in love with a girl who is beautiful but too broken to marry will be banned, and their screenwriters sentenced to a life of hard labor. If "daddy issues" are a major theme in these dramas, a board of female censors will screen these movies to determine if they are too boring for them to allow them to go into wide release.

Anything made by Zack Snyder will be burned.

Computers full of pornographic anime will be seized and destroyed.

Owning those "V for Vendetta" masks will result in a minimum five-year sentence.

"My Little Pony" will be allowed for little girls, but grown men engaging with its fictional universe in any way will be put in a harness and made to pull a carriage around the park for a year.

With inspiration from this year's "Ghostbusters" release, all Hollywood remakes of classic films will star majority-female casts.

10. A ban on social media. For years, women have had to endure harassment from men on Facebook, Twitter and Snapchat and now from heaven only knows what other social-media app that's popped up lately. And everyone throws their hands in the air and says there's nothing we can really do about it.

False! If you ban men from social media, you can cut back on the vast majority of the harassment. Having a Twitter, Facebook or other social-media account will land a man a year in prison. Using any of these services to send a dick pic will get him 10 years. Going on Reddit will result in having a hand cut off.

If you've gotten this far in the piece, congratulations. My proposal may sound tough, but tough times call for tough measures. I am the law-and-order journalist. Trump should immediately drop his anti-immigration plan and adopt this plan that's guaranteed to lower the crime rate.