Trump has canned responses for his talk with Bishop Wayne T. Jackson. Here are the questions he needs to be asked 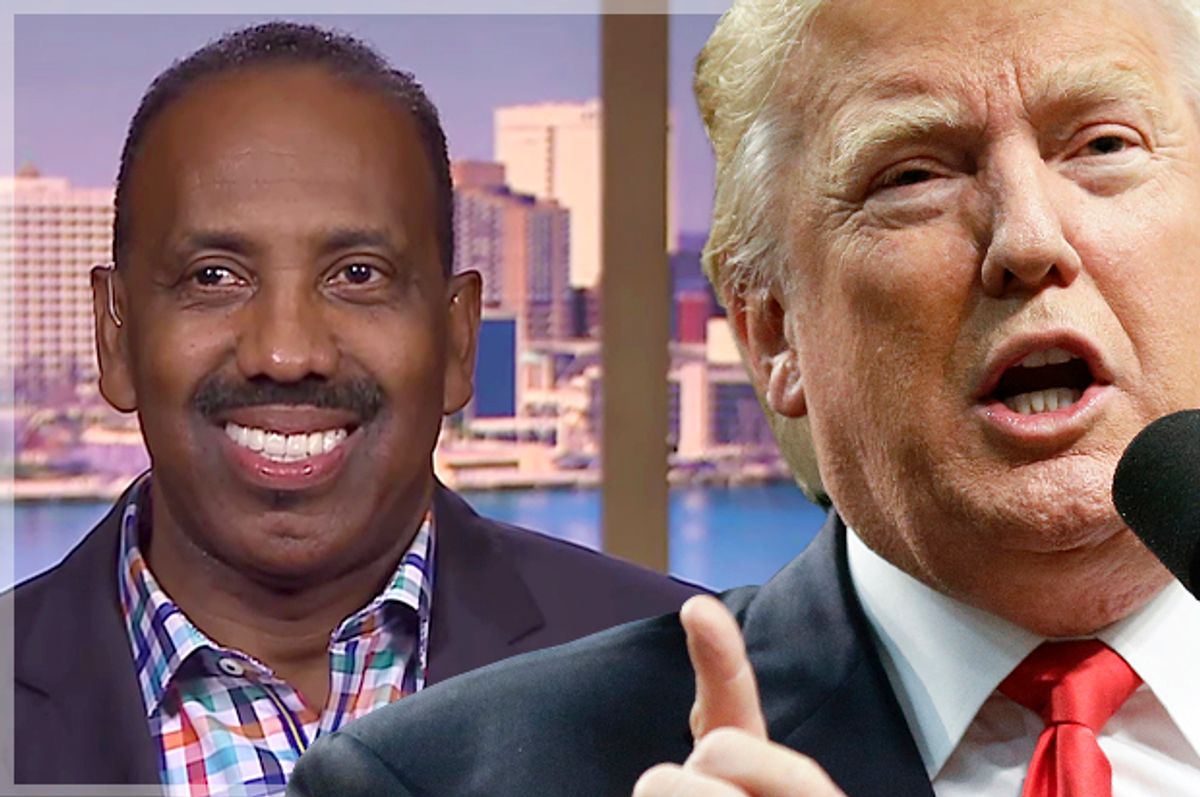 Donald Trump began his faux outreach campaign to African-American voters by calling them uneducated unemployed losers whose lives are a living hell. Beginning this weekend, the second stage of Trump’s outreach campaign to African-American voters will reportedly consist of meetings at a select group of black churches, a tour of inner-city communities like Detroit and an interview on the Impact Network.

The New York Times has obtained a leaked copy of the questions that the Republican presidential nominee will be asked during his interview with Bishop Wayne T. Jackson as well as the scripted responses to them. A presidential candidate will prepare for an important interview. This is both expected and reasonable.

But given that Donald Trump has been endorsed by avowed white supremacists such as David Duke, is the preferred candidate of the Ku Klux Klan and neo-Nazis and is leading a nativist and racist political movement, the entire scenario is laughably disingenuous and the stuff of a skit on "Saturday Night Live" or "Chappelle's Show." The setup would be made only more perfect if David Chappelle’s character Clayton Bigsby, the blind black white supremacist, interviewed Donald Trump.

The New York Times has reported:

His team was leaving nothing to chance.

Instead of speaking to the congregation at Great Faith Ministries International, Mr. Trump had planned to be interviewed by its pastor in a session that would be closed to the public and the news media, with questions submitted in advance. And instead of letting Mr. Trump be his freewheeling self, his campaign prepared lengthy answers for the submitted questions, consulting black Republicans to make sure he says the right things.

One of the leaked questions and answers include this gem:

As President, I must serve all Americans without regard to race, ethnicity or any other qualification. I must approach my task with the utmost wisdom and make sure that all Americans have opportunities to achieve to their potential. If we are to Make America Great Again, we must reduce, rather than highlight, issues of race in this country.

Apparently, Trump, like other conservatives, did not take Supreme Court Justice Harry Blackmun’s wisdom to heart when he said, “In order to get beyond racism, we must first take account of race. There is no other way. And in order to treat some persons equally, we must treat them differently.”

In all, Trump’s prepared answers are the same tired, ineffective and tedious talking points that have been recycled by the Republican Party in its black “outreach” campaigns since at least the days of leaders like Ronald Reagan and likely back as far as Richard Nixon's time. The policies described have been proved ineffective in improving the economic and political fortunes of black and brown communities.

Moreover, the “color blind,” free market, neoliberal, “small government” policies advocated by Trump and the Republican Party are in many ways responsible for the institutional and systemic inequalities that they purport to correct. As I wrote in an earlier Salon piece, African-American voters are not stupid, bamboozled, dumb or unsophisticated: They have chosen to reject the poison pill offered by a Republican Party that is racist and hostile toward people of color.

If Trump was actually serious about wanting to win over African-American voters he would answer the following questions during his interview with Bishop Jackson on the Impact Network.

1. Mr. Trump, you were one of the first people to suggest that Barack Obama, the United States’ first black president, was not born in the United States and is thus ineligible to hold the country’s highest elected office. Many black Americans perceive this to be profoundly racist and insulting to Obama, the person, and African-Americans, more generally. How would you respond to those concerns?

2. Mr. Trump, you helped to manage apartment buildings in New York City that as a matter of policy did not rent to African-Americans and other people of color. Your father’s company, for which you served as an executive and manager, settled a civil rights lawsuit in 1975. Please address this matter.

3. Mr. Trump, your father was arrested at a Ku Klux Klan rally in 1927. Can you share some more information about this incident?

5. Mr. Trump, in a recent speech you said that you feel that police in places like Chicago are afraid to do their jobs and have been acting with restraint in the country’s inner city communities. Chicago's police have been involved in numerous high-profile killings of unarmed African-Americans. Chicago police were even operating a “black site” where they tortured and abused people to coerce confessions and obtain other information from them. The Chicago police department was also described in a recent internal report as having “no regard for the sanctity of life when it comes to people of color.” Do you still believe that police in cities like Chicago are acting with “restraint” in how they treat African-Americans and other people of color?

6. Mr. Trump, across the United States Republican officials — in an effort to supposedly prevent “voter fraud” — have enacted laws that prevent poor people, students, the elderly and people of color from voting. The courts have ruled that many of these laws are unconstitutional and violate the civil rights of African-Americans and other groups. Do you think that these laws should have been passed? Do you support overturning them?

Of course, Donald Trump will not be asked these questions. Trump is polling at 1 percent (which is within the margin of error; his support might, in fact, be zero) among African-Americans. His black outreach campaign is unlikely to significantly improve his numbers. Trump is taking advice from “black Republicans” who are marginalized within their own community. He is making appearances at black churches that have prostituted themselves to a racist and nativist.

Ultimately, Trump’s target audience is those white Republican and right-leaning voters who are uncomfortable with his open racism and bigotry. To win them over, Trump is now dog whistling his racism in black churches and on a black “Christian” TV network. Those same white voters are not watching the Impact Network. Nor are they sitting in the pews of black churches. Donald Trump’s faux outreach campaign to black and brown voters is the worst type of cynical and dishonest ploy. Any black church official who aids and abets it should be ashamed. But then again, one should never forget that silver and gold has bought the soul of many a Judas.