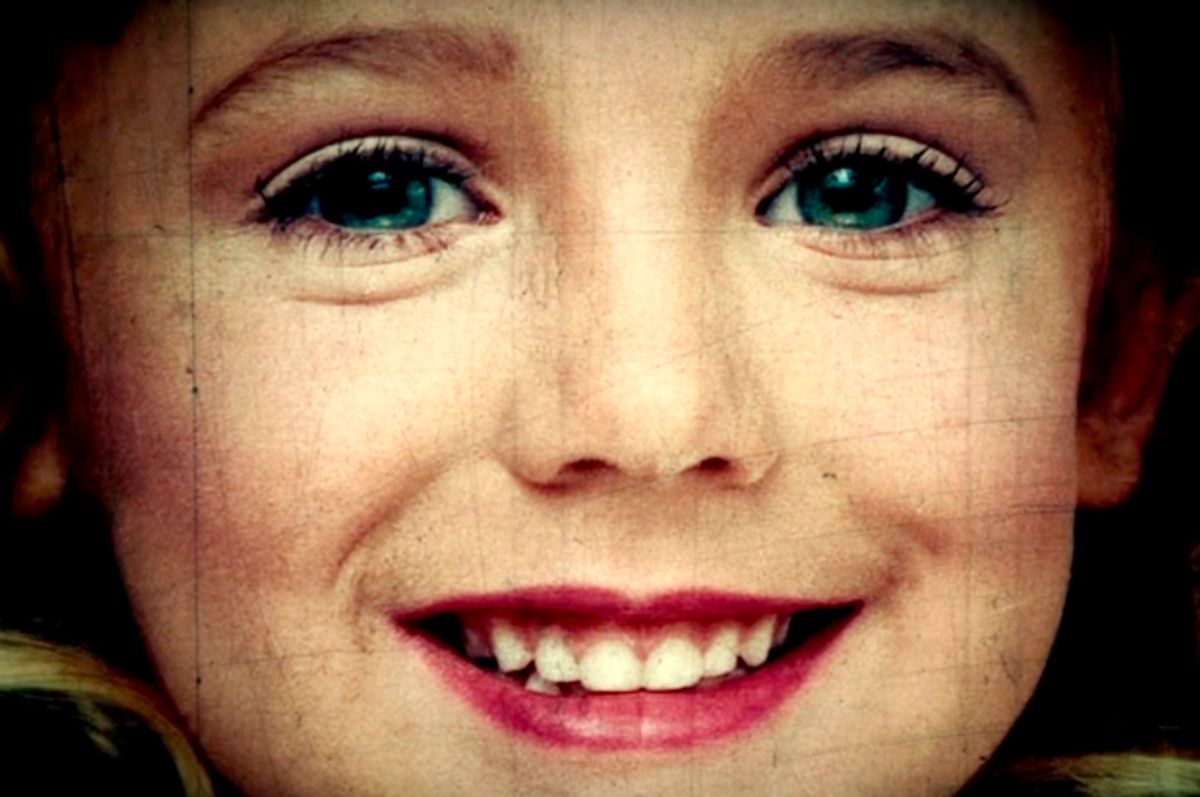 Imitation follows success on television, leading to a bounty of serviceable clones that don't quite match the original's greatness. That’s what happens in the best-case scenarios. In the worst cases, the industry responds to a wonderful discovery by flooding us with shoddy imitations. In the process, the extraordinary value of that first work can be suffocated as paler copies pile on, earning our revulsion — which is a positive human reaction, mind you, that can help us avoid harm and bad taste.

But for whatever reason, the idea of exhuming the unsolved murder of Colorado pageant queen JonBenét Ramsey continues to transmute revulsion into fascination. This is why, nearly two decades after the six-year-old was found strangled to death in her basement, four new TV projects are on the way, with three of them airing this month.

CBS’s project features a team of experts who previously worked on the case, in addition to new ones, and among the geegaws it employs in its quest for the truth is a full-scale model of the Ramsey home.

We’ll get a few weeks to catch our collective breath before Lifetime delivers its teleflick “Who Killed JonBenét?” starring Michel Gill as JonBenét's father John Ramsey, Julia Campbell as Patsy Ramsey and Eion Bailey as Boulder Police Department lead detective Steve Thomas, the man who was convinced that Patsy did the crime.

Adjacent to all this is Burke Ramsey’s widely teased three-part interview with Phil McGraw, with the first segment airing on the “Dr. Phil” September 12 season premiere. Burke was nine years old when his sister was murdered and also emerged as a possible suspect at the time. Apparently this is the first time he’s breaking his silence. John Ramsey appears in the A&E trailer as an interview subject, while Patsy Ramsey is featured in archival footage. She died of ovarian cancer in 2006, at the age of 49.

Full episodes were not available for review at the time of this story’s writing. (Nor is there any word on whether some other outlet plans to add to this ghoulish remembrance by re-airing CBS’s 2000 telepic “Perfect Murder, Perfect Town: JonBenét and the City of Boulder,” which starred Kris Kristofferson as detective Lou Smit and Marg Helgenberger as Patsy Ramsey.)

But the teasers are contradictory in terms of revealing each project’s tone and intent. “What the media has done, instead of covering this as a story that should be properly investigated . . . it’s become entertainment,” opines the first expert in the A&E trailer, before chyrons invite us to “Get the Whole Truth” with new interviews, new evidence and new revelations. This is all shown in the foreground of faded footage of JonBenét dancing and twirling in garish pageant gear.

The CBS preview is more than three minutes long, and includes an array of bold statements insinuating that, like “Making a Murderer” and “Serial,” the conclusions of this team of experts could change the trajectory of a case that gone unsolved for two decades, and not for lack of investigating.

While it’s impossible to fully evaluate these series without having seen them, the entire business has a whiff of Al Capone’s vault about it, all hype and demolition but revealing a roomful of nothing in the end.

This is what we get for devouring the “This American Life” spinoff podcast “Serial,” and HBO’s “The Jinx: The Life and Deaths of Robert Durst,” for binging Netflix’s “Making a Murderer” and raving over FX’s scripted miniseries “The People v. OJ Simpson: American Crime Story” and ESPN’s critically-acclaimed “30 for 30” docuseries “OJ Simpson: Made in America.”

Between our demonstrated addiction to the true crime doc format and this murder’s 20th anniversary hook, the tabloid obsession to end all tabloid obsessions is being served up buffet style.

The important distinction between this revisiting of a child’s murder and content such as “Serial,” “The Jinx” and the others is that the latter group has broader cultural value. It sure was fun analyzing Sarah Paulson’s wigs and John Travolta’s eyebrows-as-performance-art in “The People v. OJ Simpson,” but the series as a whole delivered a vital message: It and “The Jinx” show that with enough money and influence, the criminal justice system can be rigged.

In “The Jinx,” Durst, an obscenely wealthy New York real estate heir, purchased the finest legal defense possible to help him stave off a murder conviction, while Simpson’s lawyers capitalized on his fame and L.A.’s abysmal race relations to transform the courtroom proceedings into a soap opera. The strategy won his acquittal of the murders of his ex-wife Nicole Brown and Ronald Goldman.

On the other end of the spectrum, our brick-by-brick examinations of “Serial” subject Adnan Syed and the men at the center of “Making a Murderer,” Brendan Dassey and Steven Avery, help to illustrate the ways in which a person’s socioeconomic status or heritage adversely affects his shot at receiving impartial treatment within our justice system.

All of these works yielded thoughtful conversations about class, race and the systematic structures that ensure unequal treatment in the eyes of the law. In fairness, a few of these elements play out in JonBenét’s case as well. If the Ramseys had not been white, wealthy and able to hire a PR firm to handle press, if their daughter had resembled the average six-year-old as opposed to a painted, prancing porcelain doll, maybe her murder investigation would merit a “Dateline” Friday night true crime installment or an Investigation Discovery special. But not a multi-episode 20-year reunion spectacle on broadcast and cable television.

The miserable fact that JonBenét’s lipsticked smile still beams at us from tabloid magazines all these years after her death speaks to the media’s preoccupation with the rich and their air of exclusivity and with the bizarre circumstances surrounding the girl’s murder.

The O.J. Simpson trial may have forced America to take a hard look at its relationship with fame, race and privilege, but JonBenét kept talk show hosts like Geraldo Rivera, Jenny Jones and Leeza Gibbons busily dissecting its more nauseating elements for quite some time. Her fully made-up face came to symbolize of the sexualized image of young girls and the higher value the news media places on the lives of Caucasian girls over children of darker hues. (Visit the National Center for Missing and Exploited Children’s search page, and notice how many faces on its posters are brown. Then ask yourself whether you’re familiar with any of their stories.)

Before JonBenét Ramsey’s murder, most of America had no idea that child pageants existed. Today, thanks to the circulated footage of the Ramseys’s home videos, we have “Toddler and Tiaras” and "Here Comes Honey Boo-Boo." JonBenét Ramsey's name is a punchline, her image a cartoon used for parody on “Family Guy” and “South Park.”

Reminder: she was six years old when she was murdered.

There’s a chance these series and specials will suitably earn their place in this genre. That would be wonderful. Regardless of how each is received, we’re only at the beginning of exploring this latest iteration of docu-crime format: NBC has greenlit “Law & Order: True Crime” from executive producer Dick Wolf; the eight-episode first season will focus on the 1996 trial of Lyle and Erik Menendez. Errol Morris is working on a six-part true crime series for Netflix, which has also picked up a second season of “Making a Murderer.”

Every trend in TV cloning eventually veers away from the impactful and toward high-profile ratings grabs anyway. Given the international notoriety of JonBenét’s case, a docuseries treatment was probably inevitable. And in contrast with other true crime tales, at least this time the victim is at the center of examination. She is its star, she is everything; unfortunately, it’s for all the wrong reasons.