Brit right-winger Nigel Farage is right: Trump is a lot like Reagan -- in all the worst possible ways

From taxes to the poor, Trump has a staggering ignorance of the issues, just like Reagan did 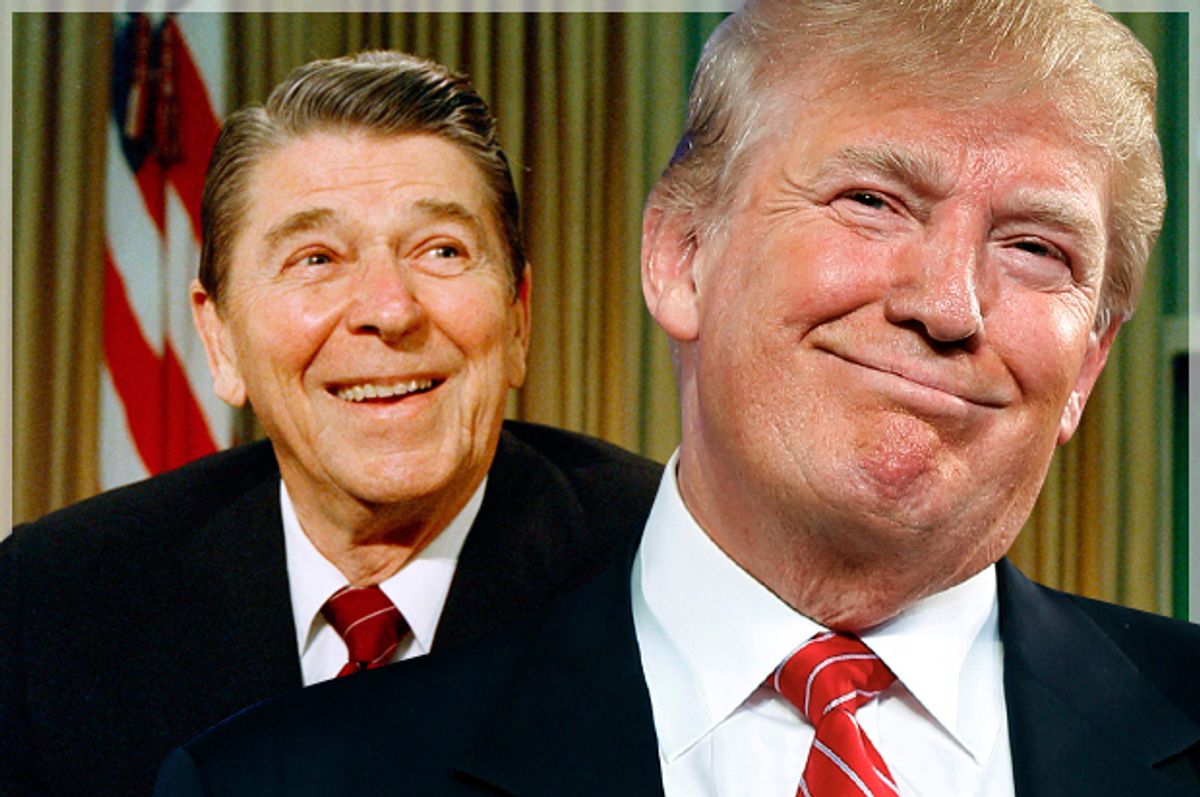 Nigel Farage, the right-wing British politician and prominent advocate of last June’s successful Brexit referendum, was beside himself when he wrote for the British tabloid newspaper Daily Mail about his experience of speaking at a recent Donald Trump rally. Farage described the event as “more like a rock concert than a political meeting.” While the Eurosceptic Brit did not endorse Trump outright, he did, in a state of starstruck rapture, compare the Republican presidential candidate to the most renowned Republican president in modern history, Ronald Reagan.

“It is worth remembering,” wrote Farage, “that virtually everyone thought that Ronald Reagan was unfit to be the U.S. president before he made a huge success of his two terms.”

For Never Trump conservatives, whose worship of Reagan borders on stoking a cult of personality, anyone comparing the Republican presidential nominee Donald Trump to the Gipper is outrageous. To these establishment figures, Reagan is on a par with George Washington and Thomas Jefferson, and likening him to a narcissistic ignoramus like Trump is simply offensive.

But if someone worships a personality as conservatives do Reagan, he or she tends to shape that personality according to one's thinking. Consider Christian fundamentalists' molding the Enlightenment thinker and deist Thomas Jefferson into one of their own.

When one briefly surveys the Reagan presidency, there are a lot more similarities between the two politicians than the simple fact that Reagan, like Trump today, was considered by many to be unfit for the presidency. An amusing example of this is illustrated by a 1971 conversation with former President Richard Nixon when Henry Kissinger, then the national security adviser declared that Reagan’s brains were “negligible” and then stated that it was "inconceivable" that the governor of California at the time would ever become president.

The most evident similarity between Trump and Reagan is their staggering ignorance of the issues. Over the past year, Trump had proved to be one of the most uninformed presidential candidates in modern history: He didn't know what the nuclear triad was, he claimed that he could eliminate the debt in eight years through trade negotiations (which is not only economically impossible but also stupid) and he has displayed an all-around ignorance about  the rest of the world. Commentators and pundits have expressed shock and dismay at his dearth of knowledge (as well as his apparent lack of interest in learning), but this cluelessness is hardly unprecedented. Historian William Leuchtenburg chronicled the ignorance of Reagan in his recent (and much recommended) book,  "The American President":

No one had ever entered the White House so grossly ill informed. At presidential news conferences, especially in his first year, Ronald Reagan embarrassed himself. On one occasion, asked why he advocated putting missiles in vulnerable places, he responded, his face registering bewilderment, “I don’t know but what maybe you haven’t gotten into the area that I’m going to turn over to the secretary of defense.”

In addition, he documented:

"You could walk through Ronald Reagan’s deepest thoughts," a California legislator said, "and not get your ankles wet." In all fields of public affairs — from diplomacy to the economy — the president stunned Washington policymakers by how little basic information he commanded. His mind, said the well-disposed Peggy Noonan, was "barren terrain.”

Besides his ignorance and incuriosity, Trump shares another important trait with Reagan: a willingness to appeal to racism and bigotry. Reagan, of course, ran for president on what is today known as the “Southern strategy,” a Republican appeal to the resentments of white Southerners, who had abandoned the Democratic Party in light of its embrace of the civil rights movement.

During his 1980 run for president, the former actor lambasted “welfare queens” and “strapping young bucks” and gave a states’ rights speech at the Neshoba County Fair, just a few miles away from Philadelphia, Mississippi, where 16 years earlier three civil rights activists had been murdered by the Ku Klux Klan. When it comes to Trump, one hardly has to explain his appeal to racists and bigots, as some of his biggest supporters are white supremacists and neo-Nazis.

And there are Trump’s tax policies, which, like Reagan’s, are based on the unsound theories of supply-side economics. While his newly released tax plan is less extreme than the one he released last year, which would have added an estimated $10 trillion to the debt over a decade, it still provides enormous cuts to big corporations and the wealthy and would balloon the deficit.

Reagan found out how fiscally irresponsible big tax cuts for the rich could be when he signed what some have called the largest tax cut in history in his first year in office, which quickly led to a steep drop in government revenue and thus a swelling deficit. Just one year after his massive tax cut, Reagan signed a massive tax increase, to make up for the revenue shortages that the previous cut had created. Then in 1983 he signed an increase on the regressive payroll tax. Nevertheless, by the time Reagan left the White House in 1989, the national debt had nearly tripled.

It seems the major difference between Trump and Reagan — besides the fact that Reagan was a well-mannered man who attempted to hide his ignorance and Trump is a vulgar philistine who is actually proud of it — is that Reagan was something of a true believer, while Trump is a charlatan. Reagan was indeed convinced that the welfare state had ruined America and that the Soviet Union was an “evil empire.” Trump, in contrast, can change his positions on a whim, and says whatever he believes will gain him votes or rile up his base (no matter how odious or false).

Reagan, as wrong as he was (and he was very wrong indeed), had certain ideals and convictions, and one generally knew where he stood politically and ideologically. The same cannot be said for Trump, whose cynicism and demagoguery rival that of Sen. Joseph McCarthy. Trump believes in Donald Trump, and he will do whatever he thinks is best for Donald Trump. In the end, that kind of unprincipled narcissism can be at least as dangerous as the dogmatism of Ronald Reagan.