On refugees, we must do better: Trump's rhetoric is worse, but both parties have failed

The number of refugees being allowed into the U.S. is woefully inadequate to meet the scale of human suffering 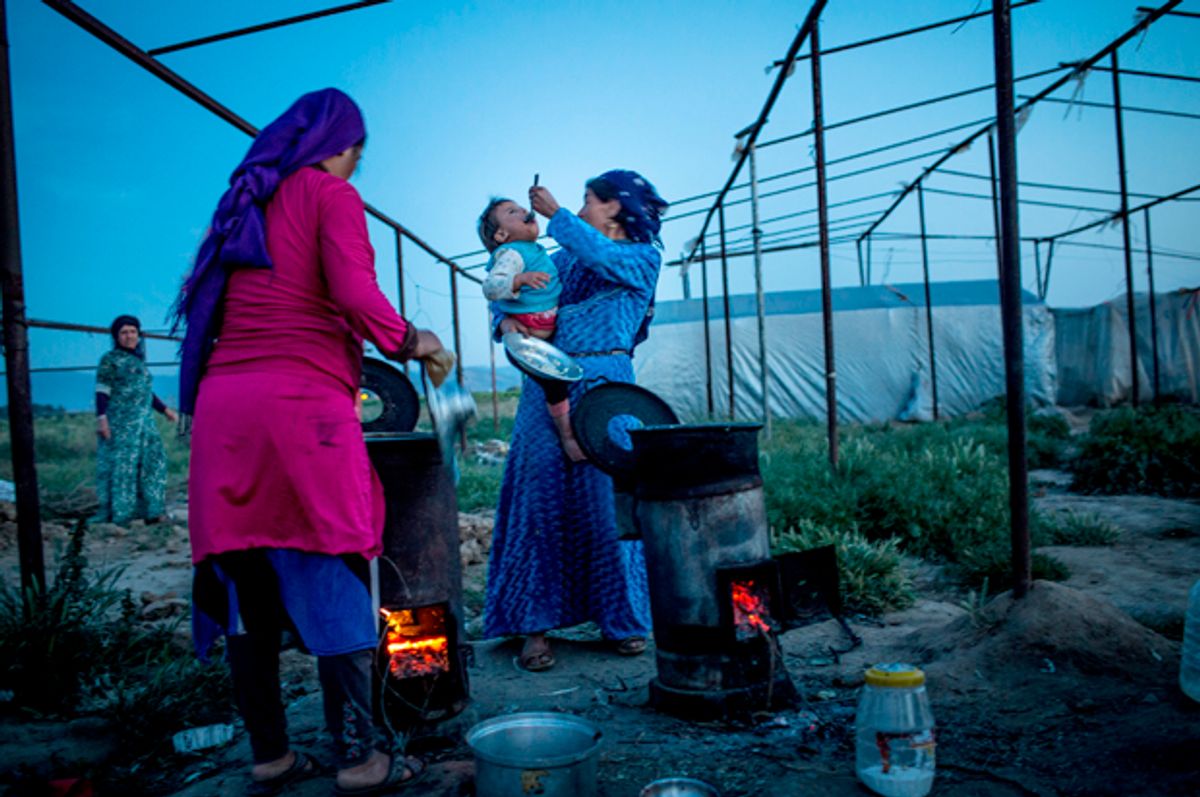 A Syrian refugee feeds her child at a tent camp on the outskirts of Izmir on April 28, 2016 in Izmir, Turkey. (Getty/Chris McGrath)
--

Donald Trump’s immigration speech on Wednesday predictably offered more of the same, including a warning that Syrian refugees pose a grave danger to American national security.

“We have no idea who these people are, where they come from,” Trump said. “I always say 'Trojan Horse.' Watch what’s going to happen, folks. It’s not going to be pretty.”

This is a running refrain of the Trump campaign. Earlier this summer, Trump claimed that Obama was “letting tens of thousands of people come in from Syria, and nobody knows who these people are, and a lot of those people are ISIS.”

Nobody knows who they are, apparently, except Trump, who somehow knows that they "are ISIS." Unsurprisingly, Trump was wrong about three factual assertions in just one sentence: Roughly 12,000 Syrian refugees have been resettled, they are subject to intensive screening and they are fleeing ISIS and the Assad regime — not fighting on their behalf.

The resettlement of actual refugees, however, has garnered far less attention than Trump’s insults. Last week, the Obama administration met its pledge to resettle 10,000 Syrians over the past year. Given the toxic political environment, that’s a noteworthy achievement. Yet that number, say advocates, is woefully inadequate to meet the scale of human suffering unfolding across the Middle East. Refugee advocates are now calling on Obama to allow a far larger number into the U.S. in the coming year.

By late September, the Obama administration is expected to release its annual plan for refugee resettlement, only a few weeks before Americans head to the polls to choose the next president. Refugee advocates are pressing the administration to commit to resettling 140,000 refugees from around the world under the U.S. Refugee Admissions program, plus 60,000 more through alternative pathways. According to Greene, however, the administration has signaled that it will resettle just 100,000 (which might not include a specific goal for Syrians). Within five years, Greene says that her group would like to see the U.S. be in a position to admit 250,000 refugees in total per year.

Republicans, Trump supporters and detractors alike, don’t want any Syrians at all. They will likely exploit the next resettlement target to stoke anti-Muslim sentiment ahead of the election. Fear of refugees is nothing new. What’s novel is the near-unanimous Republican opposition.

American skepticism of admitting refugees and immigrants "goes absolutely back to the birth of the republic,” said David Haines, professor emeritus of anthropology at George Mason University and an expert on refugees and migration. But, he says, “What’s generally happened is that the government, for reasons of domestic policy and foreign policy, has usually carved out this area of refugees as something the United States should do something about.... The Republicans are really bailing out of what has been a bipartisan support of refugee programs in some form.”

Meanwhile, actual refugees are quietly making a new life for themselves in communities across the country, including one a short drive from my house in Rhode Island. In North Smithfield, a town northwest of Providence, I met with Yahya Musa and other new arrivals at a cookout in the backyard of a mosque. Musa still had Assad on his mind and wasn’t focused on American politics.

“The regime said we are terrorists, but we’re not terrorists,” said Musa, who fled the the town of Darayya, an opposition stronghold on the outskirts of Damascus, with his family. “They are the terrorists; Assad’s father was the terrorist. There were demonstrations, so ask yourself why were there demonstrations? They would come to the neighborhood, pick a house, kill two or three [people], arrest 10 more and kill them in prison.”

Following Assad’s example, Trump has not only maligned Syrian refugees but called for “a total and complete shutdown of Muslims entering the United States until our country's representatives can figure out what is going on." Rudy Giuliani, a top Trump surrogate who was once mayor of New York, a multicultural and polyglot city, has warned that among the recent refugees from the Middle East are “terrorists who are going to come through Western Europe and come here and kill us.”

The sentiment that refugees pose a threat, said University of California San Diego sociologist David FitzGerald, has long been a staple of American politics. The S.S. St Louis, a ship packed with more than 900 Jewish refugees fleeing Nazi Germany, was turned away by the U.S. and other countries and returned to Europe.

“That,” notes FitzGerald, “was a popular policy.” More than 250 of those people later died in the war or the Holocaust.

After the war, President Harry Truman protested provisions of the 1948 Displaced Persons Act in a signing statement, pointing to language that excluded Catholics and discriminated “in callous fashion against displaced persons of the Jewish faith.”

Later, the U.S. delayed signing the 1951 United Nations Refugee Convention, says FitzGerald, because it was worried about expelling Communist agents. “The American public has never been eager to accept refugees,” he said, including groups that were later vaunted for surviving and fleeing oppression. “There was very widespread opposition against them.”

But government still resettled refugees, including large numbers from Indochina, despite public skepticism. Aside from the contentious 1980 Mariel boat-lift from Cuba, refugee matters mostly stayed out of the public eye for decades — until now. FitzGerald doesn’t believe that a major political party has ever made blanket opposition to resettling refugees a core issue, as Republicans have with Syria.

For Republicans, ISIS is public enemy No. 1. But the Syrian refugees fleeing the brutality of ISIS and the Assad regime’s barrel bombs receive little sympathy, beyond a pledge that a militarily enforced “safe zone” can keep refugees in relative safety amid wretched conditions inside the region. More than 2 million Syrian refugees are already registered in Egypt, Iraq, Jordan and Lebanon, according to a UNHCR-hosted website, along with another 2.7 million in Turkey. In the U.S., whose invasion of Iraq fueled the rise of ISIS, right-wing politicians have targeted the relative handful of Syrians resettled here over the past year as an unparalleled national security threat.

Many liberals are happy to denounce Trump’s denigration of Syrians, but they do little to pressure the government to repudiate his philosophy by accepting more refugees.

“We believe that we have the moral responsibility to do much more" than the U.S. has done so far, said Greene. She said that resettling 140,000 refugees through the U.S. Refugee Admissions program is “the minimum we can do next year to do our part to meet the challenge, and to do it in a sustainable way...that still respects all the safeguards we have for national security.”

In North Smithfield, the tranquil suburban environs stood in stark contrast to the state terror and insurgent terror the refugees had fled. Rancor was limited to a heated discussion of whether a particular package of hot dogs met halal dietary standards. (They apparently did not.)

Yahya Musa said his family’s whole world was turned upside down when the Assad regime responded to protests by laying siege to Darayya, an early hotbed of the anti-regime protest movement that Assad’s violent repression turned into a civil war. In a huge blow to the opposition last month, the besieged town was evacuated under a deal with the Assad regime.

“We told ourselves that it would pass, so we stayed longer and meanwhile they tightened the noose around us bit by bit,” said Musa.

Before the mass repression, Musa had owned shops and a farm. When they fled, he left money and gold behind. His neighbors had picked up what little was available in the way of arms, like hunting rifles, to fight back. The bloodshed worsened. The regime would destroy clinics where doctors treated the injured, and pharmacists would be arrested for providing medication to those wounded by the regime. A Christian priest, he said, would bring medication and food, and so Assad’s forces destroyed his church. Musa has seen more than 30 family members sent to prison, he said. Only one, a cousin, was released. One day, Musa recounted through tears, his cousin and his cousin's son were stopped on their way to work. Regime forces beat the son to death before his father's eyes, and then took him back to prison.

The regime bombarded his town with mortars and artillery, he says, and massacred hundreds of civilians. Musa and his family, including his pregnant wife, fled to a neighboring district. They stayed there for six months and then made their way across farmland and crossed into Jordan. He found work as a carpenter in Amman. But life was hard, and after an arduous application process the family made their way to the United States.

Mahmoud Al-Fares, another refugee, fled to Jordan with his family after a soldier shot him in the leg as he was leaving a mosque. In Syria, he ran a large textile operation. In the U.S., he is eager for any kind of work at all.

Trump likes to compare refugees to snakes, and says we can’t trust them because “we don’t know who they are.” In fact, the U.S. government knows exactly who they are, because all potential refugees are thoroughly investigated and vetted. If ordinary Americans are curious, they can volunteer to assist Syrian refugees and meet them in person. Their message is a simple one.

“In general, Syrians are oppressed,” said Alaa Mohammed Nammis, who fled regime bombardment of his Damascus neighborhood with his family. “We have no recourse but God, and can’t do anything. We have no connection with terrorists or the government. We, as a people, want to live our lives and raise our children.”