FX's new unconventional comedy takes us to places that aren’t safe, and that's what makes it outstanding 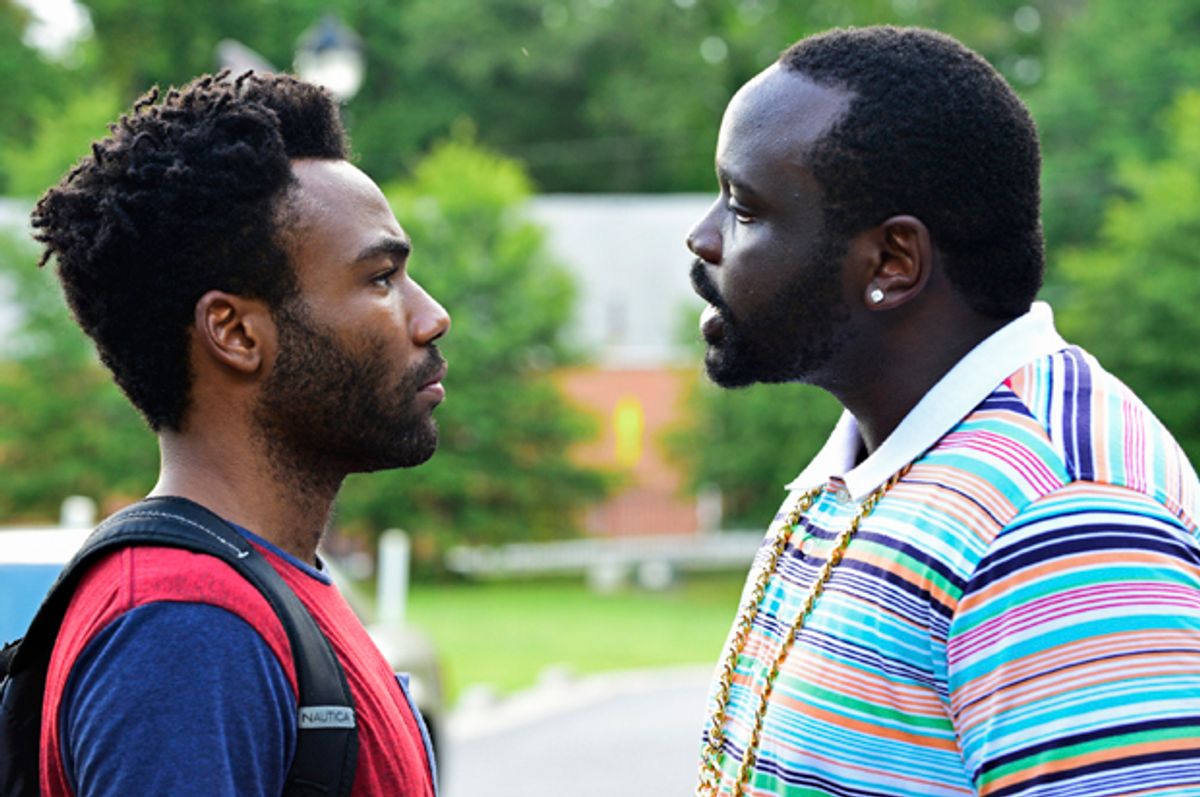 In one of “Atlanta’s” earliest scenes, Donald Glover’s character, Earnest “Earn” Marks, knocks on his cousin Alfred’s door and is greeted by a gun being pointed in his face. Earn’s reaction is not one of shock, but annoyance. Once Alfred (Brian Tyree Henry) sees who it is, he relents and lets him in.

Rounding the corner into the living room, Earn meets Alfred’s roommate Darius (Lakeith Stanfield) for the first time. Darius has a bandana over his face and is brandishing a knife in one hand while holding a plate of freshly baked cookies in the other which, once he gets the all clear from Alfred, he offers to Earn.

In a different context, this interaction might evoke dread. Here, it’s simply what Earn has to endure to visit family. Alfred, for his part, mostly seems to be going through the motions.

Make no mistake, though: Glover, who created and executive produces “Atlanta,” wants the viewer to feel the low-level tension that exists from moment to moment in the lives of these characters. We steep in that sensation for the entirety of the show’s premiere, in fact, before relaxing into the more amusing second episode. Fortunately, FX is airing the first two episodes back to back on Tuesday, September 6 at 10 p.m.

Fear and tension are odd accelerants for a comedy, and that’s precisely the point of “Atlanta,” one of several new series that defy the structure and tonal expectations of the standard television half hour. “Atlanta” is nothing like other shows, which, given Glover’s experience with conventional sitcoms — first as a writer on “30 Rock,” before co-starring on “Community” — is intentional.

You will not find the caffeinated bounce and lightness of the standard half hour here or see the usual sitcom ensemble recipe. Instead, “Atlanta” offers a view of city life in neighborhoods that television rarely explores, places that aren’t glitzy or safe, while simultaneously making a commentary on the questionable value of fame. Glover wants viewers to sense the lives of his characters, not merely watch them. And he conveys that feeling via moments of escalating anxiety that evaporate into nothing and scenarios contrasting shock and darkness with farce.

Earn, the show’s underemployed and somewhat directionless protagonist, has a job that doesn't allow him to provide for his young daughter. He crashes with her mother and his on-and-off love, Van (Zazie Beetz), and his actions constantly remind her and his parents (Isiah Whitlock, Jr. and Myra Lucretia Taylor) of how disappointing he is.

Even so, Beetz makes Van warm, level and pragmatic; she so badly wants to give Earn a chance. He’s a sensitive, creative guy who simply can’t get it together, but she’s also at the end of her tether. Their situation mirrors that of so many people bound by their children, in that it contains as much love as palpable annoyance. Yet so much more can and should be done with Van. In contrast with her cohorts, Beetz’s character enjoys the least amount of development within the first few episodes.

In larger part, “Atlanta” follows Earn as he pins his hopes on managing Alfred, who’s enjoying underground success rapping under the moniker Paper Boi. Alfred's limited fame hasn’t translated into cash, however. He's also aware of how the world sees him, though his overnight notoriety agitates above all else. (That Henry’s character embodies this viewpoint as opposed to Glover’s should not be lost on the viewer, though the latter’s flourishing hip-hop career under his Childish Gambino moniker surely gives him some expertise in this area.)

Darius, meanwhile, has a philosopher’s brain percolating beneath a layer of weird. He may spout a nonsensical observation that confuses the room into silence or, perhaps, ask people he’s just met if he can measure their tree. Within “Atlanta’s” absurdist play, Stanfield’s Darius is the show’s secret comedy weapon; he’s either a genius or simply gifted at waxing poetic while stoned, which he seems to be all the time.

In “Atlanta”’s finest moments, the interplay of Earn, Alfred and Darius’s personalities create a peculiar magic, heightening the mundane and constant hustle to make a dollar out of a dime into an exhilarating journey. There’s also a danger looming around each corner of that trip, of which the viewer is made constantly aware.

In one frame, Darius and Alfred are harvesting the fruits of Alfred’s overnight success — achieved, it must be said, by an equal measure of Earn’s strategizing and a violent confrontation that gets them mentioned on the news. Soon, though, Alfred discovers there’s a danger in being “hot”; he’s on edge and warily looking over his shoulder. Earn, meanwhile, find himself stuck in a portion of a police precinct viewers don’t usually see, resulting in squeamish, ridiculous interactions that turn on a dime from hilarious to hair-raising .

Glover’s thesis in creating “Atlanta” was to make the viewer feel what it’s like to be black. “I always want people to be scared,” he recently told TV reporters, “because that’s how it kind of feels to be black. You are, like, there are awesome things going on here, but, like, it can be taken away at any moment.”

Thus, as Glover and his writers cloud the air with edged emotions, they also invite us to reconsider any preconceptions of who these people are. “Atlanta” is an overwhelmingly male-dominated series, which is typical for FX; that its gaze is fixed upon young black male characters in particular is important. The writers do not contort the story to assimilate Alfred, Darius or Earn into primetime TV’s ideas of acceptable blackness. Instead, they’re simply guys who smoke blunts and do what they need to do to get by.

They’re also funny, thoughtful and completely unsure of what they’re doing. Their lives aren’t merely unglamorous, they are filled with struggle, insanity and, yes, humor.

Laughter doesn’t emerge easily in the first thirty minutes of “Atlanta,” and in the second episode it’s telling that the funniest sequences take place in a profoundly grim setting, abruptly juxtaposed with casual bursts of violence and psychic pain. You can never get too comfortable while watching this show.

The deliberate pacing and dreamy, surreal tone of “Atlanta” may prove too off-putting for viewers searching for easy entertainment. But those thirsting for a fearless, fresh perspective in comedy will find much to appreciate here. A visit to “Atlanta” is a fine idea in either case, and it may leave you curious to stick around and see what’s waiting down the road.