From the streets to tweets: The dangerous rise of 'internet banging' 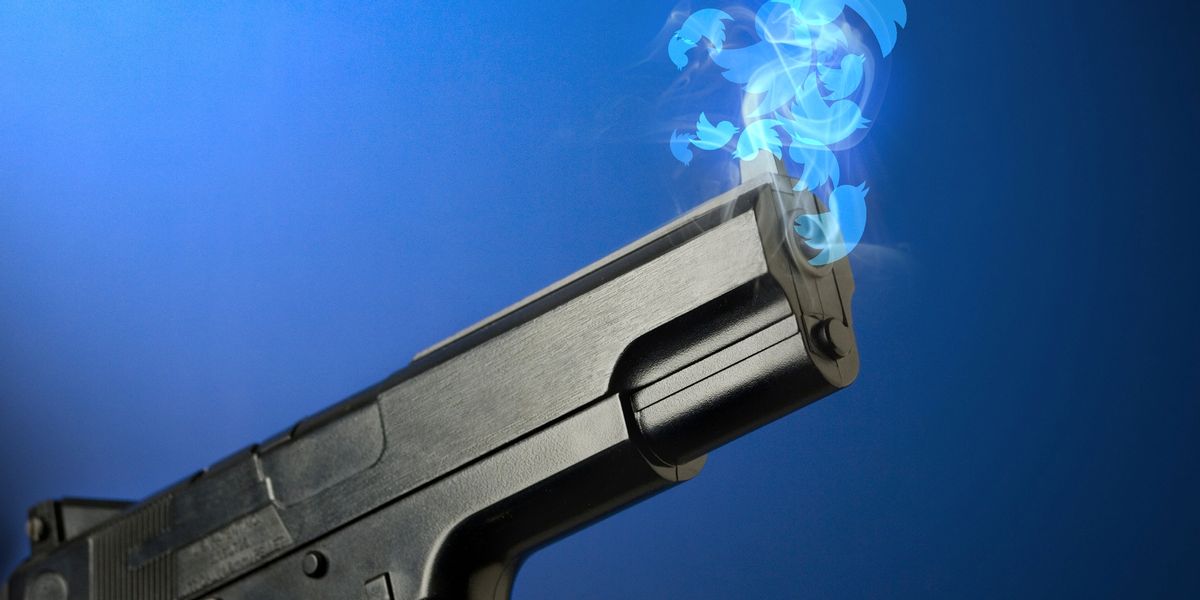 If you want to get a real first-hand look at gang culture in Chicago’s South Side, all you need to do is scroll through the Twitter feed of Gahrika Barnes.

The 17-year-old was a known member of the Gangster Disciples, a gang in the Woodlawn neighborhood, who’s suspected by police in multiple shootings.

Under the alias @TyquanAssassin, Barnes tweeted over 27,000 times to her 2,700 followers: boasting about her gang affiliation, posting messages of grief over friends who had been shot by rival gangs and threatening retaliation, and taunting the police. She describes herself in her bio as a “PAID SHOOTA.”

She was murdered on Eberhart Street, mere hours after tweeting the address of her current hangout.

Barnes is a casualty of what Dr. Desmond Patton calls "internet banging." Patton is an associate professor at Columbia University in New York and one of the few academics looking into the language of gang members online. He’s found that social media has only exacerbated tensions between gangs, as the clashes and taunting that were once reserved for the streets have not only moved online but have done so with profound intensity.

In January, Patton published a piece in the Journal of Human Behavior and Development where he described how individuals who are gang-involved “live and narrate their lives on social media.” Their on- and offline worlds collide in a Gordian knot of profiles, personalities, real emotions and performative identities, often times with devastating consequences. That same month, Chicago’s interim police chief, John Escalante, blamed a rise in murders on the escalation of gang disputes through social media channels.

Patton began looking into the social media language of gang members while doing his Ph.D. research in Chicago, an ideal setting given that a 2012 study by the Chicago Crime Commission found the city had more gangs than any other U.S. city.

His early fascination with the social media language of rappers and gang members led to a study of over 1,000 tweets posted by Chicago gang members. Patton and his team analyzed not only the tweets but the people who tweeted them and the context that provoked them. This initial analysis was used to create a language resource for social workers and law enforcement officers and helped aid them in the prevention of violence.

As one of the few researchers in this field, Patton dominates the literature, most of which has been published this year. His January article in the academic journal Computers in Human Behavior, titled "Internet banging: New trends in social media, gang violence, masculinity and hip hop," identified historical and cultural threads that have led to the intersection between social media and gang culture.

For starters, he notes the “relative low cost of smartphones, emergence of social media and SNSs, and increased technological literacy” has led to influx of tech-savvy teens. At the same time, Patton and his co-authors link urban growth and economic disenfranchisement to the rise in gang violence. They argue that the loss of factory jobs in urban areas "affected masculine identity profoundly. Almost overnight, many blue-collar men who embodied the American work ethic became unemployed and disenfranchised, severely damaging many urban men’s self images and representing an identity shift."

Indeed, since 2000, America has lost over 5 million factory jobs. These losses have directly impacted the Rust Belt, America’s so-called manufacturing heartland, of which Chicago once reigned supreme. Yet, due to many factors including increased automation, free-trade agreements and the transfer of manufacturing plants, factory jobs have been on a slow decline since the 1980s and have, in part, contributed to the poverty of Chicago’s neighborhoods. A New York Times article from May of this year draws a link between the poverty in Chicago’s racially segregated neighborhoods and a lack of affordable housing to the rise in Chicago’s gang-related crime. Another article in Chicago Magazine from 2012 connects the rise of gangs in Chicago to failed fair-housing practices.

Of course, this issue is bigger than Chicago, and it’s impossible to measure the transformative power and growth of social media over the last 10 years. It’s affected every aspect of our lives, and it makes sense that it would have a ripple effect on gang culture and beyond.

“The outcome generated a hip-hop identity that, along with unemployment and poor educational opportunities, helps to situate urban males for mass incarceration and poor outcomes, and it is this identity that fuels the behavior we currently see in among African-American men on the Internet,” Patton writes. “In social media, the hip-hop identity has found the optimal playground to perpetuate and replicate itself, because of its public nature.”

In another article, also published in Computers in Human Behavior, Patton quotes a violence worker, Mario, who observed gang members travel into rival territory to taunt other gangs online. “[T]hey’ll go on the streets of the group and they’ll take pictures or they’ll take a video and they’ll put it on YouTube or ‘We’re in your neighborhood.’ And Facebook and they’ll take pictures right in the neighborhood like saying, ‘Ha ha,’ laughing, taunting them. And that’s part of a taunt too. Like provoking them, letting them know, you know what we got your guy. He was snoozing.”

In addition to the posturing and threats, Patton notes that grief and trauma play a role, too. It’s a daily cycle playing out in 140-character bursts. You can see it all through Barnes’s tweets and those that were made in the wake of her murder. (Barnes's own account is locked now, but screenshots survive on news stories and sites like Hipwiki, a wiki for hip-hop culture.)

As a result, police in major urban cities are keeping tabs on social media to crack down on gang violence. In 2012, New York police used Facebook posts to track down gang members and arrest them. But Patton says the goal of his research is to prevent violence, not fuel arrests. "Our goal is to create tools that support social workers and violence outreach workers in doing violence intervention. What we want to do is create a tool that is automatic and is informed by a real-world understanding of language context that can tell a violence outreach worker or a social worker when some challenging activity is happening on social media and they can use their intervention method to work with people around these issues."

In his research for “Sticks, stones and Facebook accounts,” Patton identified the complex nature of using social media to both identify potential violence and to build relationships. He quotes one social worker, Luis, who gave an example of when social media was able to de-escalate violence:

So there’s branches of Warrior Kings, there’s branches of 26. Every branch is a street, right. So it’s like Minerva and 14th might be a branch. Darren and 26th might be another branch. If those two groups are identified in the video, right. And we notice that there’s going to be a conflict between both of the groups we go talk to somebody that we’ve built a relationship with in that group and will have somebody from this side talk to that group that they built a relationship with and try to avoid any conflicts from happening in the future.

Luis said that de-escalation is most effective when social media is used as a gentle reminder of the danger. He noted: “We use a lot of, ‘You guys are putting yourself out there. You guys are being watched by the police. You guys are starting drama that you don’t need.’ A lot of the times when we build relationships with these guys we’ll use family members. Like, ‘Hey you know you’ve got a sick mother and you need to take care of her’ … So you get them to start reflecting on their actions that they might be thinking about in the future like retaliation or anything like that.”

In Barnes's case, the intervention was less successful. The Chicago police, who track gang-member activity online, were aware of the threats on her life and were actively searching for her to keep her safe, but she evaded them. In fact, she bragged on Twitter that she was hiding from the police. She was killed just a few days later.