The Oscars might not be #SoWhite in 2017: These buzz-worthy performances could be game-changers

If the Academy wants to break its 2-year streak of all-white actor nods, here are the names to keep an eye on 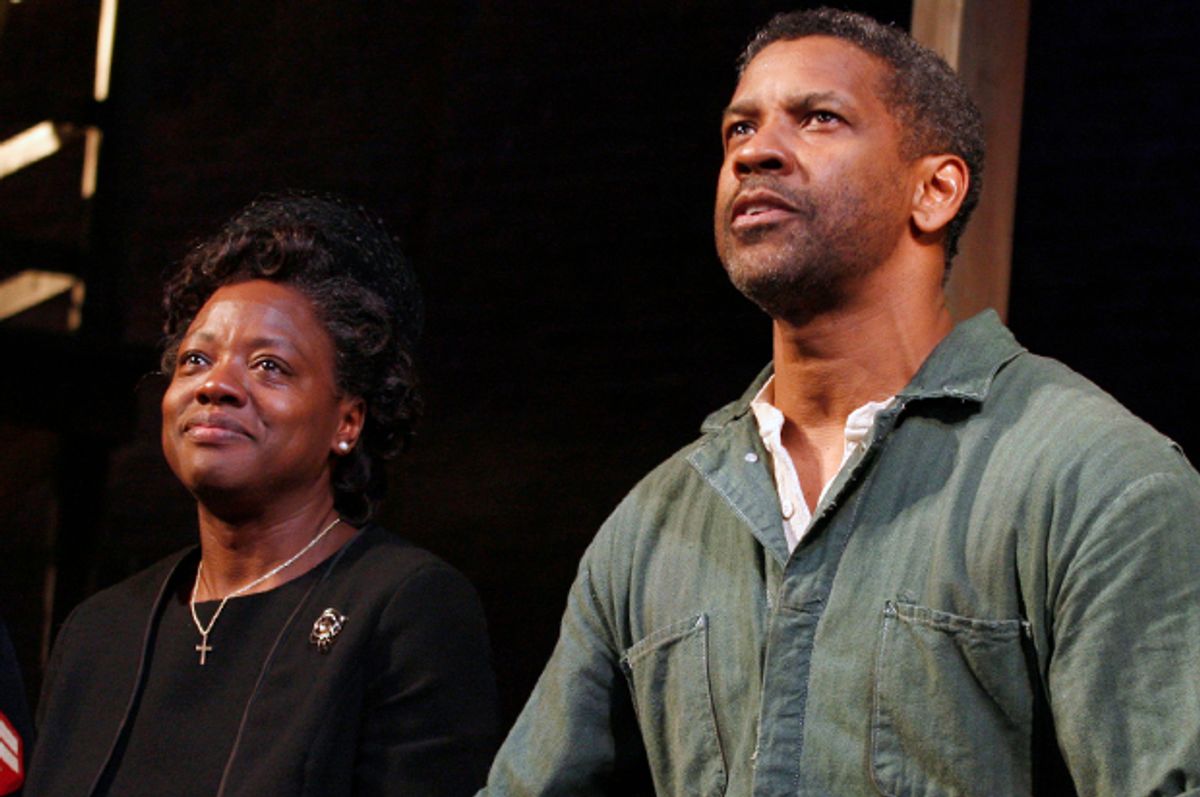 Can this year’s Academy Awards overcome the shadow of #OscarsSoWhite? Just weeks ago, the answer was a definitive yes. Nate Parker’s “The Birth of a Nation,” which was scooped up for a record $17.5 million at the Sundance Film Festival, looked to be this year’s safest bet. The film tells the story of Nat Turner, who led a rebellion in 1831 Virginia in protest of the harsh conditions to which the enslaved were subjected.

Its awards chances, however, have been thrown into question following a rape case from Parker's college years that resurfaced in the wake of the film's Sundance premiere. Parker, who wrote, directed and stars in the Fox Searchlight release, was accused of sexually assaulting a co-ed while he was a student at Penn State. Parker, who claimed the encounter was consensual, was acquitted, but his co-defendant and classmate at the time, Jean Celestin, was not. Celestin, who co-wrote "The Birth of a Nation," was convicted, although the ruling was overturned on appeal when the young woman refused to testify in a new trial. Many, including feminist writer Roxane Gay, have vowed to boycott “The Birth of a Nation” in support of Parker's accuser, who took her own life years later.

In the wake of the controversy, the film was dropped from the American Film Institute’s fall festival, an important launching pad for awards season. Jan Schuette, the dean of AFI, has said that there are plans to have a “special moderated discussion” about the film at a later date. Its status as a strong Oscar contender is no longer a lock.

But there are a handful of other Oscar hopefuls already waiting in the wings. At the current moment, Vulture’s Kyle Buchanan predicts that “Manchester by the Sea” is the presumptive frontrunner. The acclaimed tearjerker from director Kenneth Lonergan (“Margaret”) features powerhouse performances from two previous Oscar-nominees: Casey Affleck (“The Assassination of Jesse James”) and Michelle Williams (“Brokeback Mountain”). The Amazon release was a major hit at Sundance and will screen at the New York Film Festival next month.

2017, however, is looking to be light on the traditional prestige fare that usually drives awards season. There’s “La La Land,” a musical set in the Golden Age of Hollywood, and possibly “Live By Night,” a Ben Affleck-directed gangster film that has yet to set a release date. Martin Scorsese’s “Silence” will bow in November, but it’s a three-hour plus drama about Jesuit monks in 17th century Japan. That might be a hard sell for audiences, even within the Academy.

The dearth of usual-suspect front-runners may lead to an uncertain Oscar season, but it could also be a major boon to actors of color, despite the Parker controversy. After two consecutive years of all-white acting nominees, this could finally be the year of #OscarsSoBlack.

Cheryl Boone Isaacs, the president of the Academy of Motion Picture Arts and Sciences, promised a dramatic restructuring of Oscar voting eligibility following deafening criticism of the Academy’s lack of diversity. In 2014, director Ava DuVernay missed out on a chance to become the first black woman nominated for Best Director for “Selma,” a galvanizing civil rights drama that earned among the best reviews of the year and a Best Picture nomination. David Oyelowo, who gave a towering performance as Martin Luther King, was also snubbed. “Selma” was once considered a front-runner in the race; it settled for just two nominations, with a win for Best Original Song (Common and John Legend, "Glory").

History repeated itself last year when actors Michael B. Jordan (“Creed”) and Idris Elba (“Beasts of No Nation”) failed to receive nominations for their acclaimed performances. Playing a fearsome warlord, Elba was nominated for a Golden Globe and a BAFTA. He even won the Best Supporting Actor trophy at both the SAG and Independent Spirit awards. The stars of the critical and box office hit “Straight Outta Compton,” a biopic of the groundbreaking hip-hop group N.W.A., were likewise snubbed, despite placing on the top 10 lists of the AFI and Producers Guild Awards, both trusted Oscar precursors.

Should the Oscars break that unfortunate trend, 2017 may prove be a particularly historic one for the Academy. Viola Davis is mounting a major campaign to take home her first-ever Oscar for “Fences,” an adaptation of the Pulitzer Prize-winning play by August Wilson. Davis won her second Tony for the role in the Broadway revival. Her onstage leading man, Denzel Washington, will pull double duty — directing and co-starring in the film.

Should Davis win a gold statuette for “Fences,” it will rectify one of the grossest miscarriages of justice in Academy history. In 2012, the 51-year-old was considered a lock to take home the Best Actress trophy for “The Help” after winning at the Golden Globes and the SAG Awards. Instead the honor went to Meryl Streep, nabbing her third Oscar for the wretched Margaret Thatcher biopic “The Iron Lady,” a movie very few people actually liked. (Oddly enough, Streep could again face off against Davis for Stephen Frears’ “Florence Foster Jenkins,” in which the beloved film icon plays the worst singer in the world.)

Ruth Negga, who stars in Jeff Nichols’ “Loving,” may also join Davis in the Best Actress race. The Ethiopian actress, who currently stars in AMC’s “Preacher,” plays Mildred Loving, a black woman who fought for the right to wed her white partner in the 1960s, when interracial relationships weren’t legally recognized in the U.S. Negga’s expressive performance drew raves at this year’s Cannes Film Festival, where “Loving” was earmarked as a possible Best Picture nominee.

Should Negga and Davis earn Best Actress nominations, it would be an overdue event for the Academy. It’s extremely rare that two non-white actresses are nominated in the same category during the same year. To date, it’s only happened four times: in 1967 (Beah Richards and Carol Channing), 1972 (1972 Cicely Tyson and Diana Ross), 1985 (Margaret Avery and Oprah Winfrey) and 2008 (Viola Davis and Taraji P. Henson).

If the Oscars want to make 2017 the year of black actresses, one film to watch out for is “Hidden Figures.” The little-known true story about three NASA engineers who help launch John Glenn into space has a dream cast, featuring Oscar-winner Octavia Spencer (“The Help”), Oscar-nominee Taraji P. Henson (TV’s “Empire) and R&B singer Janelle Monae. Directed by Theodore Melfi (“St. Vincent”), Fox is reportedly high on the film, so much so that it’s screening raw footage from the film at this year’s Toronto International Film Festival.

Monae will also appear in “Moonlight,” a coming-of-age drama in the vein of “Pariah” and “Boyhood.” Based on the play “In Moonlight Black Boys Look Blue,” the Barry Jenkins-directed film follows Chiron, a black gay man coming to terms with his sexuality against the backdrop of the War on Drugs in Reagan-era Miami. Chiron is played by three different actors (Andre Holland, Jharrel Jerome and Jaden Piner) over the course of his life. British actress Naomie Harris (“Mandela: Long Walk to Freedom”) is receiving the lion’s share of pre-release buzz for the film, as Chiron’s supportive mother, Paula.

“Moonlight” was a major smash at the Telluride Film Festival, where “Brokeback Mountain began its awards season run 11 years ago. Currently, Jenkins’ film stands at a perfect 100 on Metacritic, a strong sign of its Best Picture (and potentially Best Director) chances going forward. No LGBT-themed film has won the highest honors at the Oscars since Bob Fosse’s “Cabaret” in 1973, and an armful of trophies for Jenkins and his team help address the Academy Awards’ repeated exclusion of queer-themed films. In addition to the “Brokeback” controversy — when “Crash” upset the gay cowboy romance in 2006 — the critically-beloved lesbian drama “Carol” was left off last year’s Best Picture list.

Aside from Denzel Washington — who is a two-time winner — the most probable black Best Actor nominee is David Oyelowo, who will be competing against himself this Oscar season. The Brit stars in both “Queen of Katwe,” a Disney crowdpleaser about a Ugandan girl who dreams of being a chess champion, and “A United Kingdom,” an interracial period romance. Oyelowo plays the first president of Botswana, Seretse Khama, who created an international stir in 1947 when he married a British clerk, played in the film by Rosamund Pike (“Gone Girl”).

If “A United Kingdom” is a hit with Oscar voters, it could mean a nomination for its director, Amma Asante, too. A former actress, the Ghanian-born filmmaker announced herself as one to watch following the well-reviewed period drama “Belle.” In the 2013 film, Gugu Mbatha-Raw played a 18th century woman, Dido Elizabeth Belle, whose mixed heritage was a source of controversy in Victorian England. Only four women have ever been nominated for Best Director — Lina Wertmüller, Jane Campion, Sofia Coppola and Kathryn Bigelow — and only Bigelow has won. No woman of color has made the director shortlist on Oscar night.

The Oscar voters fighting to maintain the status quo

Despite this impressive list of names, the biggest obstacle to progress may be the Oscars themselves. After Boone Isaacs announced that the Academy planned to expand membership among people of color and women, doubling minority numbers by 2020, the change elicited violent revolt from older members of the voting body.

“Everybody was offended that we were being portrayed as a bunch of racists,” composer William Goldstein told The Hollywood Reporter. “We judge films on the merits,” added documentary filmmaker Arnold Schwartzman. There were some great films with white people that didn't get in that I was upset about. Race had nothing to do with any of it.” Actor Tab Hunter claimed that criticism of the Oscars was “bullshit,” while even Steven Spielberg denied that the fracas was about racial exclusion in the Academy ranks. Some AMPAS voters discussed filing a class-action lawsuit over age discrimination.

Since the new eligibility rules were announced, the Academy has rolled back the very changes designed to make its selections more inclusive. Instead of 30 consecutive years of work within the industry to determine eligibility, the new rule states that since they became a member, voters must be active “anytime during three 10-year periods whether consecutive or not.” After taking small steps toward progress, this about-face represents a great leap in the wrong direction.

If this isn’t the year black actors reclaim the Oscars, the Academy will only have itself to blame.