The personal is always political: The politics of swimming in 2016 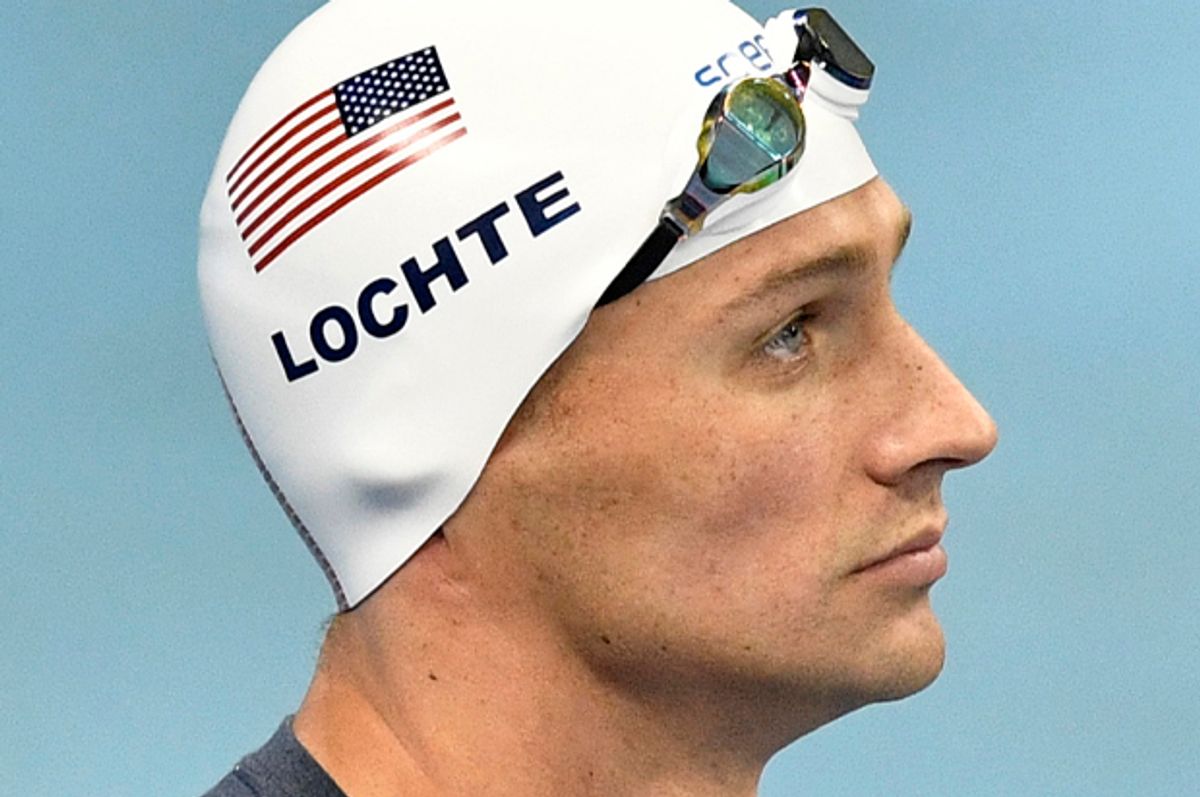 When I go swimming — every day, for whatever part of an hour best suits my mood and muscles — I slip into another zone, a blue bubble of silence that restores my soul while it expands my horizons. Nothing intrudes: no conversations, no waterproof earphones pumping music into my head, no TV shout fests labeling something that happened 24 hours ago as “breaking news.” During laps in the pool, my grandchildren know to avoid my lane, as does the family of frogs that took up residence this summer. In the sea I swim alone, gliding past creatures with their own agendas, who can’t be bothered by something that has to surface to breathe. This watery cocoon is my safe space, my thinking place, my escape from the world at large to a buoyant room of my own.

But not this summer, when a cascade of swimming-related fiascos turned my personal refuge into a political whirlpool.

The sea of stories began with the liquid itself. At the Rio Olympics, raw sewage in the bays and off the beaches threatened swimmers and sailors, requiring helicopter runs to head off the debris. Then the water in the diving pool morphed from robin’s-egg-blue to Shrek green, a disturbing chemical reaction that generated all those dumb jokes about bodily fluids mixing with chlorine. (“What do you get when you combine blue and yellow?”) I realized that my news-free water zone was totally doomed when I saw the explanation posted by Wired magazine: “Many people are saying that Donald Trump’s pool cleaning service is not everything the ads promise.”

Try diving in without thinking about that every day.

The tidal wave rolled on with the frat-boy behavior and CYA lies concocted by U.S. Olympic swimmer Ryan Lochte. Like everyone else cheering all those magnificent human torpedoes in Rio, I was riveted by their speed, in awe of the decades of focus and dedication that led to the medal stand. It takes both to be a champion, as the ancient Romans knew — Mens sana in corpore sano: Sound mind, sound body. But Lochte, 32, and the decade-younger posse he left behind, absorbed only half the lesson. “The guy pulled out his gun, he cocked it, put it to my forehead,” Lochte said on the air, a dramatically detailed fiction that cruelly mocked a host nation struggling with crime and poverty. Lochte trashed not only Brazil but his own career, inevitably dragging the rest of us underwater with him. With the inevitable bathroom humor.

According to NBC’s late-night comedian Jimmy Fallon, Lochte “claimed he got robbed in Rio just to cover up the fact that he actually vandalized a gas station bathroom. Then, the other swimmers said, ‘What were you doing in a bathroom? Just hold it and do it in the pool like we do. We’re swimmers!’” Ba-da-boom.

Conan O’Brien told his TBS audience, “The Olympics closing ceremony was held in Rio last night. There was an emotional moment at the end when they extinguished the Olympic torch by having Ryan Lochte urinate on it.”

I was almost grateful when the punchline turned political. “The whole world thinks of Ryan Lochte as that crazy American with the weird hair who keeps making stuff up and causing an international incident,” said CBS’ Stephen Colbert, “which is not how an Olympian acts. That is how a presidential candidate acts.”

Strange lanemates, indeed. Ryan Lochte and Donald Trump are body opposites: one swam majestically to his fame before diving to the bottom, while the other threatens to drown us all with his blinkered nativism and vile rhetoric. Still, the confabulating swimmer and the politicking confabulator (“Believe me!”) share the arrogance and ignorance of the deeply self-absorbed. In the face of offensive acts, neither knows how to apologize, to understand the effect of their words and deeds. They have fouled the atmosphere far worse than the floating garbage in Rio’s bays and beaches.

But perhaps the most treacherous undercurrent came from some politicians (who sounded as if they were channeling Trump) in France, where the historic devotion to “laïcité” (“secularism”) in all government affairs briefly cancelled out that other “L” in their heritage: liberté. Citing recent ISIS-related terrorist attacks, notably the July assault that murdered 80 along a beach in Nice, local authorities in several communities banned the burkini — a head-to-toe swimsuit worn by some Muslim women. One local court called it “a straightforward symbol of religiosity.” The French ambassador to the United States tweeted that burkinis were part of “a patriarchal, regressive and mysoginistic [sic] clothing code.”

Moving to read so many supporters of the submission to a patriarchal, regressive and mysoginistic clothing code. That's what is at stake.

Such self-styled, if orthographically challenged, liberalism aside — the French prime minister claimed they were fighting “the enslavement of women” — an international wave of dissent roared ashore, especially when Riviera police ticketed women wearing the offending outfits, and in one case appeared to force them to strip off parts of their headscarf, tunic or leggings. “Coercing a woman out of her burka is as bad as coercing her into one,” wrote novelist Arundhati Roy about an earlier ban on Muslim street dress. “It’s not about the burka. It’s about the coercion.”

This latest attempt to control women’s bodies is especially ironic given the history of beachwear — basically, a history of less. A century ago, as American women started ditching their long, voluminous, water-laden full skirts and puffy sleeves for more practical, short-skirted tank suits that liberated their limbs, police prowled American beaches with a tape measure to make sure the distance from knee to hem did not exceed six inches. Then the tide turned. In the 1960 hit song, “Itsy Bitsy Teeny Weeny Yellow Polka Dot Bikini,” a fashion victim is so embarrassed by her new, minimalist costume (described by Harper’s Bazaar editor Diana Vreeland as revealing “everything about a girl except her mother’s maiden name”), she’s afraid to emerge from the water.

Have I mentioned that President John Quincy Adams used to swim buck naked in the Potomac?

So yes, politics has always seeped into swimming, but it also brought some very good news this summer that was relevant and long overdue.

When Simone Manuel rocketed into the wall in the women’s 100-meter freestyle, tying for first with Canada’s Penny Oleksiak, she not only set a new Olympic record, but helped stamp out centuries of bigotry and myth. Swimming pools were among the last bastions of segregation in the United States, and generations of American blacks grew up without learning to swim. That gave rise to a stubborn canard: blacks can’t float. And, when the decks finally cleared, one social taboo: women’s processed hair frizzed right back up in the water. Little wonder Manuel, 20, the first to win an individual gold, said she felt “the weight of the black community” as she raced. “It means a lot,” she said of her victory, “especially with what’s going on in the world today, just with some of the issues with police brutality.” She also paid tribute to “the African-Americans that … came before me,” like Cullen Jones, who won a gold and two silvers in London — solid proof that USA Swimming’s outreach is working.

But Manuel, 20, isn’t limiting her future to identity politics. “I would like there to be a day where there are more of us and it’s not ‘Simone, the black swimmer,’” she said. “I want to win, just like everybody else.”

And about that hair thing? “It’s hair. It will grow back,” she has said. “Swimming tops hair in my case.”

And then there’s Yusra Mardini, the 18-year-old Syrian who became an Olympian long before she got to Rio. When the motor gave out on the small dinghy carrying Mardini and 19 others from Turkey to Greece, she got into the water with her sister and two others and literally swam them to the safety of Lesbos. As a member of the Refugee Team, Mardini won her heat in the 100-meter butterfly, but failed to make the finals (where the winner clocked just over 54 seconds).

“I don’t think politics should intrude on my swimming,” says Donna de Varona, who won two gold medals in the 1964 Tokyo Olympics and now helps other female athletes transition into the real world. “But swimming is the one sport that will literally save your life. Look at Yusra Mardini. For her to swim in the trials was like winning a gold medal.”

Now, like summer, the games are over. The green water in the diving pool turned out to be an excess of hydrogen peroxide, finally fixed. And speaking of too much bleach, Ryan Lochte’s hair is no longer white. His fate has yet to be determined by the U.S. Olympic Committee, but a cough-drop maker and — irony alert — a crime prevention alarm company have stepped in to rehabilitate his image after four major sponsors pulled out. France’s high court has overturned one of the burkini bans and a local court has scrapped another.

Simone Manuel will no doubt break new records as she enters Stanford and prepares for the 2020 Olympics in Tokyo. Yusra Mardini is also dreaming of Tokyo and training in Berlin.

I’m back in the water, too, fully aware, as we used to say, that the personal is always political. And hoping that the logic and sanity solving some of the water controversies of this strange and turbulent summer will spill over to November’s election. During the Olympics, at the height of the fears about the water quality, some folks on social media offered helpful hints to our anxious athletes, words that could equally apply to a presidential candidate who’s in way over his head. If you find yourself getting wet, they said, “Keep your mouth closed.”