Shades of 1968 and 2000: Facing sinking polls and a wily opponent, Clinton boosters blame the left and the media 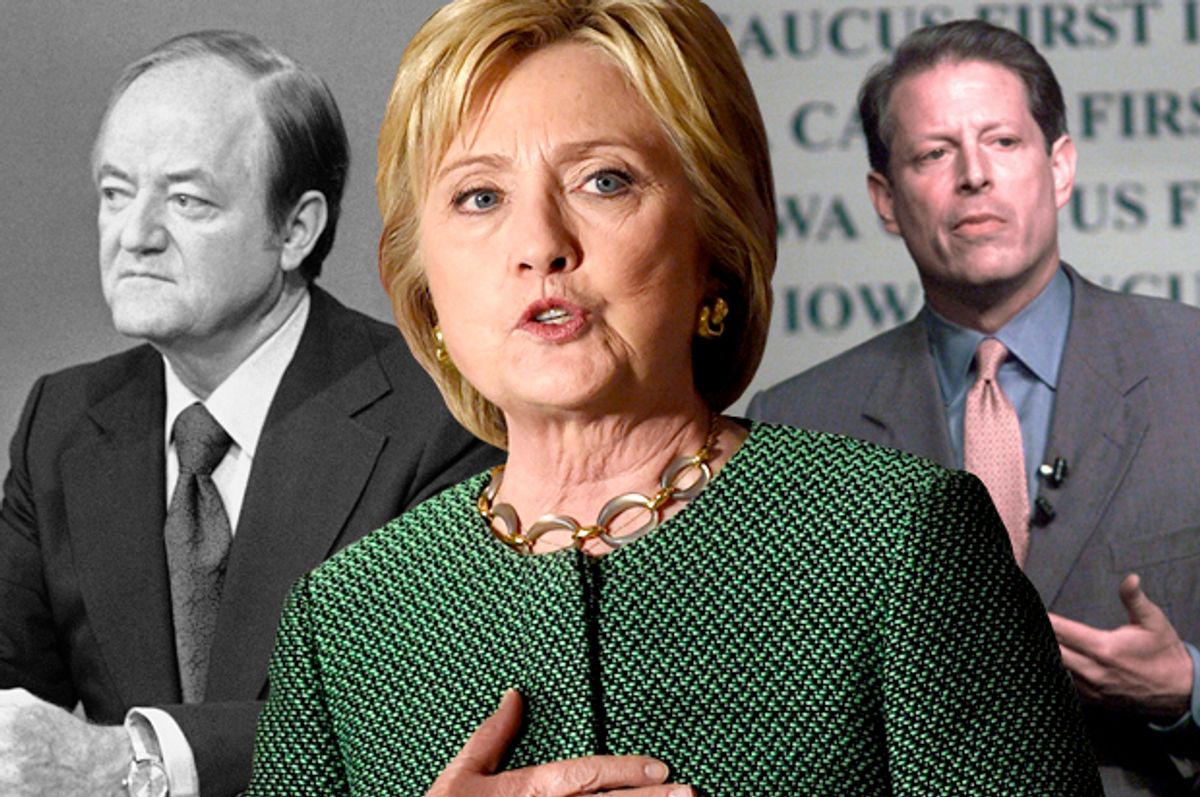 At least when Hubert Humphrey lost the 1968 presidential election, nobody tried to pretend that the Democratic Party didn’t have a problem. Humphrey’s defeat came at the end of perhaps the most disastrous campaign season experienced by any political party in the modern era. (We will have to wait a bit longer before measuring it against this year's Republican primary campaign.) Under the circumstances, it’s remarkable that election was as close as it was: Richard Nixon beat Humphrey by barely 500,000 votes nationwide, although the Electoral College vote was far more one-sided.

It was only in hindsight, when political scientists and party apparatchiks began to pick at the skeleton of that history-shaping year, that the election of Richard Nixon became Someone Else’s Fault. It was the fractious and irresponsible anti-war left; it was the racist white South. It was Pat Buchanan and George Wallace; it was the “white ethnic” working class, voting against its own interests in order to vote against hippies and dope and free love. It was hoity-toity liberals who couldn’t be bothered. I can’t find any evidence that anyone tried to blame the mainstream media for inflicting Nixon on the country, or not precisely in those terms. (Journalists generally hated Nixon’s guts, and the feeling was mutual.) But anything’s possible.

In other words, 1968 became the first opportunity to blame left-wing dissent and other marginal factors for the Democratic Party’s failings. It was an early draft of blaming Ralph Nader in 2000 or blaming Bernie Sanders now. (I wouldn’t be surprised to learn that neither of them voted for Humphrey in ’68.) This tendency to shift responsibility for one’s own political incoherence onto nonconformists or internal opposition or unfriendly outside factors established an unfortunate template that is still used to bash the left for the so-called election of George W. Bush, as if the fact that the Democrats nominated an awkward candidate who ran a dreadful campaign had nothing to do with that outcome.

That template is being readied again this year. We got out of bed after the Labor Day holiday — the traditional beginning of the general-election campaign in the vanished era before the 24/7 news cycle — to learn that a new CNN poll puts Hillary Clinton and Donald Trump dead even. (Actually, it has Trump ahead, but who’s counting?) Nate Silver’s customary assurance that Clinton is roughly 85 percent to 90 percent likely to win the election was curiously lacking from Tuesday’s edition of The New York Times.

Instead, Times readers got a Paul Krugman column (published on Monday before the CNN poll) proclaiming that Clinton was being “Gored” by the media, meaning that she is consistently portrayed in unflattering terms and slimed with innuendo, as Krugman claims Al Gore was in 2000. Tuesday’s Times also featured a reported article from a campaign appearance by Bernie Sanders in New Hampshire, whose headline and subhead suggested that “many” former Sanders supporters were “diehards,” likely to “resist” Clinton and vote for Green Party nominee Jill Stein instead. In fact, reporter Yamiche Alcindor interviewed only two such voters; as the article ultimately made clear, polls have suggested that a large majority of Sanders’ former supporters will vote for Clinton, as the Vermont senator has forcefully urged them to.

Anyone who reads political tea leaves according to the customary rules would conclude, momentary poll panic aside, that Clinton still has numerous structural advantages and leads in the most important swing states and is likely to win the election. But even as I wrote that sentence, I lost count of all the weasel words and conditional phrases it contains. If we could pile up all the planks of conventional wisdom proved false this year, we’d have a pile of delusional teeter-totters reaching to the moon. Winter has come a few weeks early for the chattering classes of the Beltway; that’s their teeth you hear.

Should Clinton manage to steal defeat from the jaws of victory, as she nearly did in her race against Sanders, the excuses are being lined up. According to the institutional Demo boosters, it will not mean — and could not mean — that the Democrats are members of  a deeply flawed party with no coherent message who nominated a candidate that hardly anyone likes. Oh, and the fact that the party has been virtually wiped off the map in most of the non-coastal states and is at or near an all-time low in voter identification — none of that matters either. Stuff happens, in the immortal words of former Secretary of Defense Donald Rumsfeld. Stupid people are stupid and racist people are racist. The Democrats have done the best they possibly could or at least their message has been a lot more palatable than the other guys'. Isn’t that the same thing pretty much?

Hillary Clinton came of age as a Wellesley undergrad during the 1968 campaign and often speaks about ringing doorbells for Eugene McCarthy in the proverbial snows of New Hampshire. No doubt she has wonky private theories about what went wrong for Humphrey in the fall race and what might have been done differently.

To this point, Clinton has run a vastly more passive and cautious presidential campaign than Humphrey did, which may be part of her problem but may also be a function of historical circumstance. After the street riots outside the Chicago convention, Humphrey was perceived as a fatally tainted candidate who was far behind in the polls and he had little choice but to go for broke.

As Time magazine put it in an election postmortem later that year, “The old Democratic coalition was disintegrating, with untold numbers of blue-collar workers responding to [George] Wallace's blandishments, Negroes [sic] threatening to sit out the election, liberals disaffected over the Vietnam War, the South lost. The war chest was almost empty, and the party's machinery, neglected by Lyndon Johnson, creaked in disrepair.” Some of that, at least, sounds strikingly familiar. (One thing you can’t say about the Clinton campaign is that it’s short of money, and I don’t think a significant number of African-Americans are “threatening” to sit this one out.)

Humphrey trailed by double digits after Labor Day and very nearly won it all back by promising tax-and-spend policies on a scale that now seems unimaginable. He vowed to expand Johnson’s Great Society programs and pursue the “War on Poverty.” He promised to push for greater civil rights and civil liberties for black people and other members of minority groups. (LGBT rights weren’t on the menu in 1968, but I honestly believe HHH would have been a mensch about that.) He mobilized the labor unions, then a powerful force in American life, to combat Wallace’s appeal to white workers.

Humphrey backed away from Johnson’s war policies at last and called for a halt in the bombing of Vietnam, which convinced McCarthy to endorse him just before the election. (Compare and contrast, grumpy Bernie bashers: McCarthy endorsed Humphrey in late October. In 1992, Jerry Brown never endorsed Bill Clinton at all. Sanders is stumping for Hillary right now.)

Consider everything that went wrong that momentous year: The incumbent running for re-election, Lyndon B. Johnson, who had won a historic landslide four years earlier, was so unpopular that he was forced from the race after the New Hampshire primary. The Democratic front-runner and likely nominee, Robert F. Kennedy, was assassinated after winning the California primary. Humphrey had not even been a primary candidate but emerged from the chaotic Chicago convention as a compromise choice embraced by the pro-war Democratic establishment. Given his long record on social justice, labor and civil rights, it wasn’t and isn’t fair to paint Humphrey as a right-winger. The “Happy Warrior” was a classic Cold War liberal, a brand that turned suddenly and unexpectedly toxic in 1968.

Over the course of the past year or so, various commentators (myself included) have explored the imperfect parallels between Humphrey and Hillary Clinton, who is about as close to being a Cold War liberal as anyone can become in 2016. Both had been well-known public figures with long records who had forged strong alliances within the Democratic coalition and both found themselves in awkward heir apparent roles, winning the nomination in a year when they appeared out of step with their party’s most activist members and the electorate as a whole. I would say their opponents are more different than similar: Whatever else he was, Nixon was a career politician and a reasonably well-informed adult human. But both Humphrey and Clinton ran against right-wing law-and-order candidates who appealed none too subtly to white racism and were viewed as hateful ogres by the left.

It’s legitimate to argue that Humphrey might have beaten Nixon in 1968 if some unknown number of disgruntled leftists hadn’t stayed home, just as it may be true that Al Gore would have been elected in 2000 if Nader hadn’t been on the Florida ballot. But we don’t know those things with certainty and never will. Arguing in advance that some similar microscopic fringe factor — the meanness of the media and the immaturity of the Bernie bros — might cause Clinton to lose to the most evil candidate ever is the worst kind of political cowardice.

What we know about the defeats of 1968 and 2000 is that the left-liberal coalition that generally supports the Democrats in presidential elections was badly divided in both those years and the Democratic nominee did not do enough to heal the rift. Humphrey simply couldn’t do enough, although he fought like hell, against impossible odds. Gore coasted along with an apparent lead, hoping that nothing would go wrong, and created the conditions for the ugliest defeat in political history. Which of those examples will Hillary Clinton emulate?