Phyllis Schlafly in her own words: Her many opinions about women, sex and equality

Forget the soft-pedaling. Here's what Schlafly really thought about everything from rape to day care 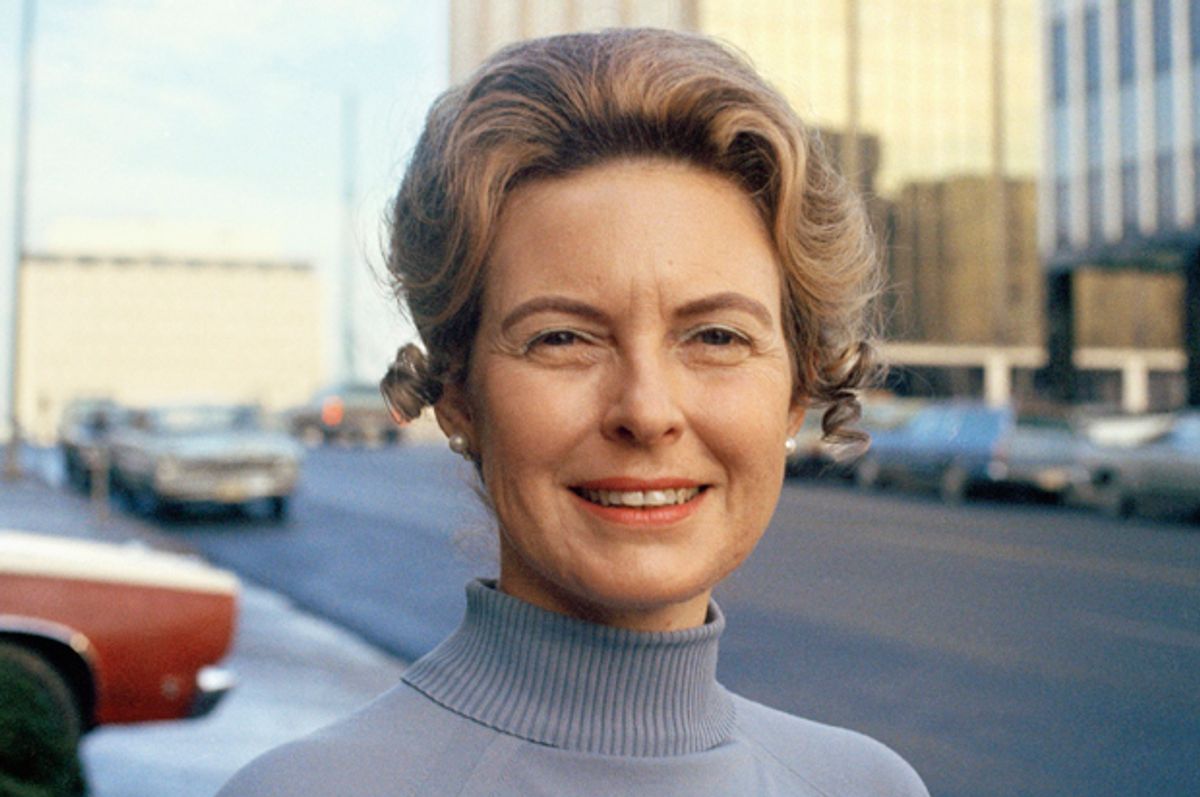 In a statement about Phyllis Schlafly's death on Monday, the Trump campaign — which Schlafly strongly supported, as she had Barry Goldwater's run in 1964 — called Schlafly "a champion for women."

It's a comical bit of right-wing doublespeak, as Schlafly spent her life as a champion of men, specifically misogynist men. This included men like her buddy and fellow opponent of the Equal Rights Amendment Sen.  Jeremiah Denton, who said, in 1982, "The guy likes to come home and get supper and a couple of martinis from a woman that is reasonably well rested."

Trump's people aren't just pulling this "champion of women" stuff out of thin air. Schlafly, who successfully spent the 1970s scaremongering about the ERA, used that little rhetorical trick, as well.

As Susan Faludi chronicled in her 1991 book "Backlash: The Undeclared War Against American Women," "The woman who opposed the ERA because it 'would take away the marvelous legal rights of a woman to be a full-time wife and mother in the house supported by her husband' was a Harvard-educated lawyer, author of nine books, and a two-time congressional candidate."

Speaking to Newsweek in 1977, Schlafly said, "Women find their greatest fulfillment at home with the family."

When reporters Susan Fraker and Elaine Sciolino pointed out that Schlafly "has a maid to do the cleaning" and "a secretary to handle her correspondence" — and has a career as a politician and a professional speaker, Schlafly denied the contradiction.

"I certainly do support some type of other interest," she retorted. "But family demands and concerns have priority. I have canceled speeches whenever my husband thought that I had been away from home too much."

Schlafly was quite a character, something that many of her obituaries will gently paper over. In interest of remembering the woman as she really was, Salon has compiled this collection of telling quotes from Schlafly's career as the nation's preeminent anti-feminist.

On the importance of wives keeping their tongue. "Fred never interfers with my civil liberties," Schlafly said of her husband in 1979. "Whenever we have a fight he reminds me of my constitutional right to remain silent."

On the "psychological" dangers of feminism. "It has caused a lot of women to have low self-esteem, to convince themselves [that they] are repressed," Schlafly told Newsweek in 1979.

On the dangers to women of liberalizing divorce laws. "When a man is fat and 50, he thinks he can be attractive to another woman and can walk out," she said in the same Newsweek piece. "It's a fact of life, though: a woman fat and 50 isn't attractive to men."

On the horrors of the National Women's Conference of 1977. "Our people didn't want to ruin a lovely weekend they could spend with their families to associate with a bunch of people wearing lesbian T shirts," she told Newsweek. But because she and members of the Eagle Forum feared the conference would endorse the ERA, they launched an effort at a hostile takeover by recruiting conservative women to be delegates.

"We were told in our church that ERA would mean the end of marriage," one delegate from Mississippi told Newsweek. "We were told that schoolbooks would show pictures of people having sex with animals and we've got to protect our children."

The effort failed and the conference endorsed the ERA.

On her opposition to federally subsidized day care. "There's no real substitute for the care of the real mother," Schlafly said in 1980.

A bill to offer low-cost child care to women "discriminates against mothers who take care of their own children and taxes them in order to subsidize those who use stranger care," she railed in 1989.

"The feminists are still crying about President Richard Nixon vetoing a federal program to make daycare a middle-class entitlement, she wrote again in 2009. "But Nixon's action was popular then and still is because the majority of Americans don't want their tax dollars to pay for babysitters for other people's children," she opined, going on to say it's best for fathers to work while women stay at home.

"She had domestic help," Schlafly's niece, Suzanne Venker, said in 2011, when asked how Schlafly managed her busy schedule while raising six kids. "She wouldn't have called them nannies, but she had people in her home. That's what she chose."

On sexual harassment. "When a woman walks across the room, she speaks with a universal body language that most men intuitively understand," Schlafly testified at a congressional hearing in 1981. "Men hardly ever ask sexual favors of women from whom the certain answer is 'no.'''

Added Schlafly, as feminists in the audience hissed and jeered: ''Sexual harassment can also occur when a non-virtuous woman gives off body language which invites sexual advances."

On domestic violence. Schlafly believed that many abuse claims were made up because "women know (and their lawyers advise them) that making allegations of domestic violence (even without proof or evidence) is the fastest and cheapest way to win child custody plus generous financial support," as she wrote in 2006.

Schlafly absolutely hated the Violence Against Women Act, which she said causes taxpayers to "fork up an estimated $20 billion a year to support the resulting single-parent, welfare-dependent families."

In reality, the Violence Against Women Act led to a 67 percent decline in domestic violence from 1993 to 2007. The number of homicides of women committed by their intimate partners declined 35 percent and homicides of men (often resulting from women acting in self-defense) declined 46 percent.

But even though the legislation saved more male lives than female lives, Schlafly called it "blatantly gender discriminatory" toward men.

On rape. "“It’s really dangerous for a guy to go to college these days," Schlafly said in 2014. "He’s better off if he doesn’t talk to any women when he gets there. The feminists are perfectly glad to make false accusations and then claim all men are capable of some dastardly deed like rape," she observed.

"By getting married, the woman has consented to sex, and I don't think you can call it rape," she said in 2007.

When asked later to clarify, Schlafly doubled down. "When you get married you have consented to sex. That's what marriage is all about," she told a student newspaper. "I don't know if maybe these girls missed sex ed." (This is an interesting comment, considering that Schlafly was a lifelong opponent of sex ed.) "Feminists, if they get tired of a husband or if they want to fight over child custody, they can make an accusation of marital rape and they want that to be there, available to them."

On sex education. "Some people are trying to use panic about AIDS to force a teaching in the public school classroom of the acceptability of promiscuous or homosexual life styles with the use of condoms," Schlafly complained in 1987, recommending instead that people just tell kids "to keep your hands out of what's inside your swimming suit."

In 1982, Schlafly argued that sex education is "teaching teenagers how to enjoy fornication without feeling guilty and without having a baby." And she claimed that society should instead be teaching the "consequences of promiscuity" and that herpes is "terrible punishment for sin."

And ''if you're going to teach them about sex, you ought to teach them, 'You can't do it until you're the right age and get a license — a marriage license,'' she cracked.

Schlafly may be gone now, but her presence helped dramatically reshape the conservative movement into what it is now. Her near-sociopathic lack of empathy (especially for anyone who isn't a straight white man) and her ease of ignoring basic facts in favor of her nasty prejudices turned out to be effective tools for organizing the right.