The last R.E.M. album with Bill Berry stands up as a travel guide through the band's impressive range 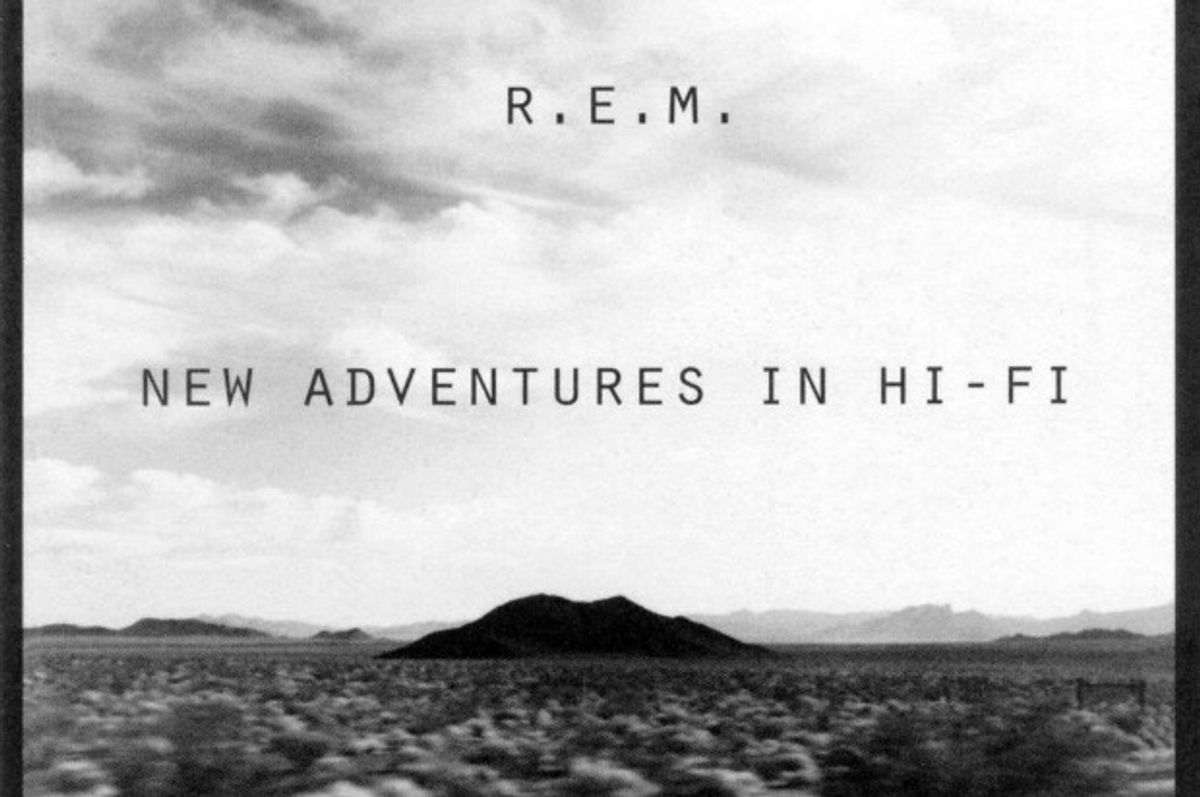 There's no right or wrong way to make an album. Some bands hunker down in the studio for months on end, with an eye toward perfecting existing songs or creating elaborate, lush music. Other groups prefer to record in short, concentrated bursts in order to preserve first-take instincts and on-the-floor live energy. A certain breed of bands even writes music while on tour, letting off steam from the rigors of traveling by jamming and being creative. During its decades-long career, R.E.M. made records using all of these approaches. The Athens, Georgia, quartet's 10th studio album, however, "New Adventures in Hi-Fi" — which turns 20 years old on Sept. 10 — was notorious for having been constructed mostly on the road.

"It's a travelogue" is how bassist Mike Mills described the LP to The New York Times. "It was recorded all over the world, with a variety of techniques, some more hi-fi than others." More specifically, "New Adventures in Hi-Fi" came together while R.E.M. was on a world tour supporting 1994's "Monster."

In fact, the band debuted many new songs live during those 1995 concerts — to name a few, the buzz-sawing "Departure," the murky surge "Undertow" and an organ-heavy, glitter-glam homage "The Wake-Up Bomb."

"Most bands at our level go out and play hits," guitarist Peter Buck told Reuters. "Not only were we not playing hits we had, but we were spending hours every day working on stuff no one had ever heard.''

That kind of road testing wasn't necessarily out of character: From very early on, R.E.M. made a point to play new tunes in front of an audience. But as Mills told Mojo in 1996, the plan all along was that these tryouts would lead to a new record. "We discussed making an album of on-the-road stuff a year and a half before we went on the 'Monster' tour," he said. "We wanted to get some of the looseness and spontaneity of a soundcheck, live show or dressing room." And so R.E.M. sound checks in Atlanta ("Leave," "Low Desert"), Memphis ("Bittersweet Me"), Phoenix ("Electrolite") and Orlando ("So Fast, So Numb") produced a bevy of songs that were filed away for what would become "New Adventures in Hi-Fi."

As the tour wore on, the steady stream of new songs assumed greater significance. In a sense, that they existed at all was a relief because the "Monster" tour was marred by medical maladies: Mills had unexpected abdominal surgery in Europe, frontman Michael Stipe had a hernia operation and most notably drummer Bill Berry experienced a ruptured brain aneurysm while onstage in Switzerland.

After the "Monster" tour when R.E.M. headed to Seattle to round out the album, members of the band were still grateful for the group's being intact. "We got into the studio feeling very happy and relieved that everyone was okay, especially Bill," Mills said. "It brought us all much closer and made us realize how important we are to each other. Once we'd been through a crisis like that, making a record was a piece of cake."

But it's too easy to say that "New Adventures in Hi-Fi" equals album A + era B: Not only did every R.E.M. record possess a distinct personality, but this LP continued to open up the band's sound to new vistas and approaches. The piano-spun "Electrolite" twinkled like an antique music box. "Low Desert" kicked up bluesy, bar-band dust, courtesy of hefty organ and hollow guitar twang. And the roaring "Binky the Doormat" boasted Farfisa organ and snake charmer-like rhythms.

"I do think that we touch on a wider range of music than just about anyone right now," Buck told dotmusic at the time. "The Beatles used to do it, Led Zeppelin used to do it and I don't think we get enough credit for doing it."

"New Adventures in Hi-Fi" does feel like a photo scrapbook of all the places that R.E.M. had been, full of vignettes about what members of the band saw and experienced. But perhaps more important, the album's sonic variety conveys the turbulence of travel. The frantic, ARP Odyssey synth ostinato on "Leave" is ominous and (occasionally) uncomfortable because its whine never wavers, while the off-kilter piano on "How The West Was Won And Where It Got Us" is unsteady on its feet, like jazz collapsing into a sinkhole. And Stipe's vocals sound grizzled and weary on highlight "So Fast, So Numb," which sounds like it's about to careen out of control — but is reined in by a jumpy, live-wire bass line, boogie-woogie piano and Berry's cucumber-cool drumming.

Naturally, the record's lyrics also contain plenty of references to traveling. In particular, meditative first single "E-Bow the Letter" — which boasts electric sitar, Mellotron, Moog synths and guttural, haunting vocals from Patti Smith — is still stunning, a song that's both wistful and wrenching. "I'll take you over," Stipe murmurs tenderly in the background of the song's coda, almost imperceptibly. "I'll take you there."

The deeply romantic "Be Mine" is similarly comforting: It pledges loyalty and fidelity to a partner through thick and thin — "I'll ply the tar of your feathers/ I'll pluck the thorns out of your feet" — with the subtext being that the couple will walk through life together defiantly, despite any objections to the union. And the album-closing "Electrolite" lets itself be swept away by breathtaking scenes of celestial beauty and tangible stardom. The protagonist is overwhelmed rather than frightened by the vastness of the world and extraordinarily grateful to be alive.

The idea of safe passage is an anomaly on "New Adventures in Hi-Fi," however. Instead, the mind-warping nature of movement — how it creates emotional and spatial disorientation, not to mention uncertainty — is much more profound. "Departure," for example, starts with these dizzying, rapid-fire lyrics: "Just arrived Singapore, San Sebastian, Spain, 26-hour trip/ Salt Lake City, come in spring." The water imagery in "Undertow" is at once suffocating and salvation giving ("I don't need a heaven/ I don't need religion/ I am in the place where I should be/ I am breathing water"), while the main character in "Bittersweet Me" is in constant motion, but feeling lost: "I don't know what I'm hungry for/ I don't know what I want anymore." The seven-minute centerpiece "Leave" is even more bereft: The song speaks of loss and personal oppression exacerbated by shifts in perspective and the passing of time.

In an interesting twist, "New Adventures in Hi-Fi" reinforces its precarious sense of faith by taking a decidedly spiritual bent. Pointed references to biblical imagery crop up throughout, with the most explicit appearing on the standout, "New Test Leper." In a 2008 question-and-answer session, Stipe explained, "The 'test' is short for testament, the New Testament of the Bible being the reference" before also adding, "The protagonist as I wrote it was inspired by a transvestite on a TV talk show trying to explain and defend her choices and orientation." Added Stipe: "It was painful to watch her basically humiliated simply by the decision to be on the show. And with commercial breaks. I couldn’t imagine what was said when they were off camera. Glaring, horrible studio lighting."

On "New Test Leper," simply moving through the world is dangerous — a profoundly moving idea which adds even more dimension to the record.

These days, fans frequently characterize "New Adventures in Hi-Fi" as underrated. That's a descriptor developed in hindsight: Back in 1996, the record debuted at No. 2 on the Billboard album charts, went platinum and spawned several alt-rock radio hits. The record does feel underrated, however, mainly because extracurricular distractions (e.g., chatter about a new Warner Bros. record contract and in 1997 about Berry leaving the band) soon started overshadowing R.E.M.'s narrative and music. That's an even bigger shame: "New Adventures In Hi-Fi" was nonchalant about its experimentation and premise and remains a collection of diffuse songs that hangs together brilliantly precisely because of its unmoored roots.