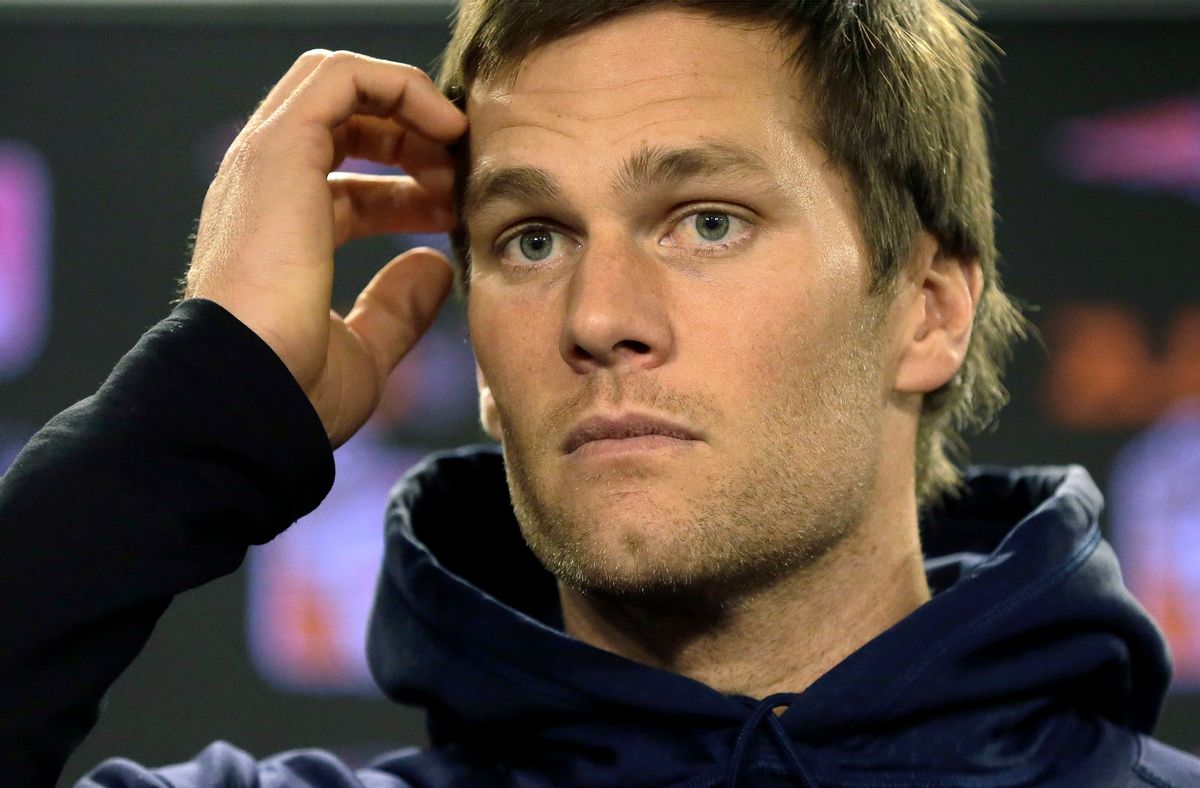 FILE - In this Jan. 6, 2016 file photo, New England Patriots quarterback Tom Brady faces reporters before a scheduled NFL football practice in Foxborough, Mass. On Wednesday, July 13, 2016, a federal appeals court has rejected Tom Brady's attempt to get a new hearing on his suspension. Brady was asking for the full 2nd U.S. Circuit Court of Appeals to hear the case. In April, a three-judge panel said that NFL commissioner Roger Goodell was within his powers when he suspended the star quarterback four games for his role in a scheme to doctor the footballs used in a Jan. 18, 2015, playoff game. (AP Photo/Steven Senne, File) (AP Photo/Steven Senne, File)
--

On the face of it, New England Patriots quarterback Tom Brady and Democratic presidential candidate Hillary Clinton don’t have much in common — professionally, temperamentally or politically. (He supports his “good friend” Donald Trump.) But Brady and Clinton actually share a rather significant experience: They both have been condemned by the media’s kangaroo court.

Although Brady is a sports hero who had never done a thing to earn the opprobrium of the press, once he was accused of having an equipment manager deflate footballs before a playoff game, presumably to make them easier to throw, the press leapt on him as if he were Ted Bundy rather than Tom Brady.

Similarly, what Clinton said about the recent Clinton Foundation dust-up — that there was smoke but no fire — could apply to nearly every situation in which her opponents have implicated her. She has been subjected to a series of almost ontological alleged wrongdoings. “You can’t trust Hillary” could be the media mantra.

Both Brady and Clinton have been victims of the media’s strong predisposition to presume guilt, whether there is evidence for it or not. This presumption has cost Brady his sterling reputation. It could cost Clinton the presidency.

That the press has a propensity for thinking the worst of people is no revelation. One could even say that today’s negativity is a corrective to a time when the media was too positive — when it too willingly accepted the sunny press-release version of events. That changed decades ago with Vietnam, which transformed the mentality of American mainstream journalists. (Not enough, however, for them to avoid the disgrace of blatantly false Iraq War coverage that they apparently considered their patriotic duty.)

Understandably, many reporters became cynical, distrustful, hypercritical — even adversarial. Politicians have been paying the price for LBJ’s mendacity ever since, with Watergate sealing the deal by verifying the media’s doubts about the system and those operating within it. This wasn’t only a change in journalism; it was a shift in the entire culture. We live within distrust.

Though I doubt he intended it, you can see just how much skepticism has come to pervade the media in an article headlined “A Farewell Guide to Political Journalism” from longtime political reporter Ron Fournier, posted last week on The Atlantic’s blog. Fournier tells about starting a website 10 years ago and suggesting to his partners that they give the story of their startup to a pliable reporter known for reprinting whatever he was told. Fournier’s partners disagreed, saying the reporter wouldn’t be credible, and one suggested instead The Washington Post’s Dan Balz, who has a reputation for being tough.

Fournier writes, “I left the meeting knowing that if I ever returned to journalism, I didn’t want to be taken for granted like the first reporter. I wanted to inspire in my sources what Balz had earned from my partners — respect and fear.”

With all due respect for Balz, who is a fine journalist, Fournier was conceding that respect in the media is largely earned not by truth-telling but by negativity.

I am sympathetic. It is so exhilarating to see zealous reporters who are willing to push back to find the truth we don’t like to admit that many have become overzealous and lose the truth. We have a press so jaundiced it often doesn’t make distinctions between magnitudes of transgression. It convicts everyone and then dishes out the same sentence.

Part of this Inspector Javert-like inflexibility is the media trying to demonstrate the grit Fournier extols. Part of it, too, is the 24/7, internet-fed magnification of every trivial offense into a capital one. And part of it is the to-hell-with-it-all attitude that’s so fashionable today.

But it is important to realize that just as pusillanimous media perform no service, misanthropic ones may not perform a service either. We may not be aware of it, but reporters increasingly filter their stories through a scrim of sardonicism that taints our news.

Take Tom Brady. Almost the second the story broke on the alleged deflated footballs, suspicion was cast on him. Frankly, it wouldn’t have been much of a story otherwise, and the media knew it. The trouble is that there was no evidence, circumstantial or otherwise, that Brady had ordered the footballs deflated. Zero.

Of course, that didn’t stop the media from telling us he did. NBC football analyst Chris Collingsworth, the smuggest of the bunch, said with open-mouthed incredulity that Brady had sat across from him and actually told him point-blank that he hadn’t asked for the balls to be deflated. Implication: He was lying.

At ESPN, they were ready to lynch Brady on the basis that since Brady was the quarterback, and the quarterback controls everything, he must have ordered it. That, in a nutshell, is how our media work. Sports or politics, it makes no difference. Innuendo subverts evidence.

The point isn’t to exonerate Brady. Actually a few outliers in the media have done that superbly, especially the incomparable Sally Jenkins of The Washington Post, who may be the best columnist in the country, sports or otherwise, and Joe Nocera of The New York Times. The point is that in the media an accusation immediately turns into conviction because it seems that 1) no reporter wants to go out and do the grunt work of actually examining the evidence; 2) a scrum forms and no one wants to risk leaving its security; and 3) guilt is the new default. The upshot is that Brady’s reputation has been irreparably tarnished.

So why pick on him? My guess is that ever since the Patriots were found guilty of videotaping an opponent’s defensive signals during a game — a trivial offense in a stadium where 80,000 fans could see the signals, too — the team has had a target on its back, for which Brady was later victimized. I’d also guess that Brady was such a paragon he was too good for his own good, so the media decided to take him down to justify their own cynicism. Either way, it was vindictive, proof of the idea that doubt is more powerful than belief.

Hillary Clinton is no Tom Brady. She has been around so long and accused of so many things that even her supporters assume she must be guilty of something, which is exactly what her detractors hoped would happen. In The Washington Post last weekend, Karen Tumulty examined what she called the “root of a Clinton scandal industry” and concluded that “Hillary Clinton had it right when she made her famous declaration that a ‘vast right-wing conspiracy’ was out to get her and her husband.” But then Tumulty put the onus back on Clinton, saying that if she hadn’t been so defensive and secretive at the outset of the Whitewater investigation, she might have stopped the accusations.

That is hardly convincing. Moreover, what Tumulty doesn’t say is that it wasn’t just the so-called right-wing conspiracy that pronounced the Clintons guilty. It was the mainstream media who have constantly picked up the right wing’s charges without interrogating them. They still are doing it. Just watch the news or read the paper.

Again, I have no interest in exonerating Clinton. She is a flawed candidate with serious personal shortcomings. But strong cases can and have been made, and not just by Clinton apologists, that the email contretemps has been rigged against her in the media. Some even have suggested that FBI chief James Comey may actually be the one who got it wrong — not by refusing to prosecute her, which would have been both unprecedented and ridiculous — but by accusing her in the first place.

As for the Clinton Foundation accusations, the AP’s story blasting Clinton for meeting with donors while she was Secretary of State has already been thoroughly discredited, but only because the story was so egregiously sloppy that it even embarrassed the cynical media. The takeaway is, if you are going to pronounce Clinton guilty, at least don’t cook the evidence in plain sight.

Clinton long ago seems to have given up the media fight. She knows she is never going to catch a break and that every action of hers will be interpreted in the worst possible light. She is clearly paranoid and has a right to be. But Clinton has not just been victimized by the media’s visceral hatred of her, any more than Tom Brady was victimized by the media’s visceral envy of him. The media take a dim view of everyone. They take a dim view of human nature. They have worked tirelessly to erode our confidence in our heroes, our politicians, our institutions, and then put it all back on them. It is what reporters do. They foment scandal. They plant doubt.

This may be how you gain respect, but a journalism that believes in nothing leaves us with nothing but a loss of faith.