Trump allegedly paid Pam Bondi $25K to end her probe of Trump U. For the Donald, this is just business as usual 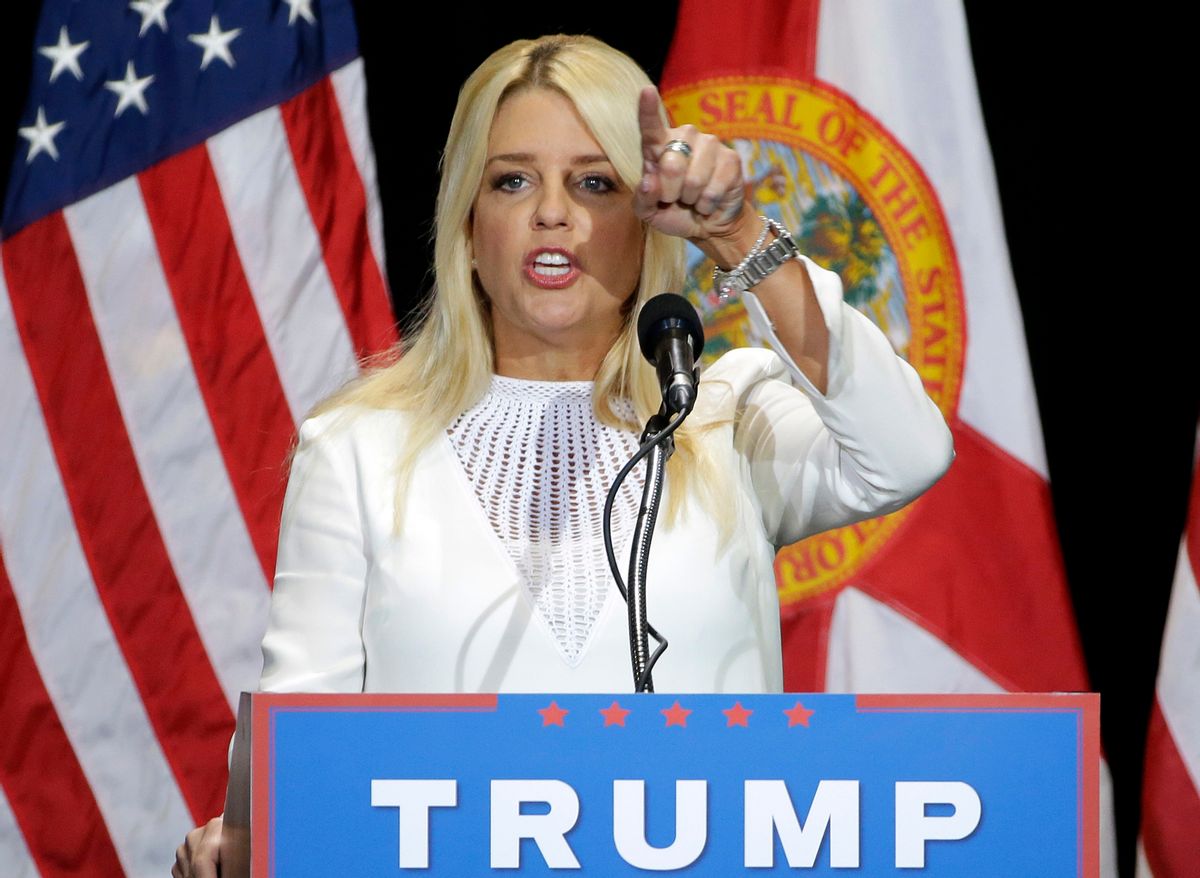 Donald Trump won the Republican primary largely by playing on his persona as a straight-talking businessman who scoffed at political correctness. He didn’t need to pretend to be an honorable man while trading money for influence in an opaque system that other politicians participate in even while bemoaning it. He was the answer to the political version of the question that a narrator used to ask during the opening crawl of MTV’s “The Real World”: What happens when a presidential candidate stops being polite and starts getting real?

Thus he could openly brag about how he donated money to politicians in order to buy favors from them. “As a businessman and a very substantial donor to very important people, when you give, they do whatever the hell you want them to do,” he told The Wall Street Journal last summer. A few weeks later onstage at the first Republican primary debate, he said, “I give to everybody. When they call, I give. And you know what? When I need something from them, two years later, three years later, I call them, and they are there for me.” Campaigning in Iowa last winter, he said of his donations to politicians, “When I call, they kiss my ass.”

It was a simple truth, one that everyone knew but still seemed surprised to hear acknowledged. So it is a little jarring to see Trump and his campaign trying to spin away what looks like an obvious case of doing exactly what he has told the public he has done over and over again.

The story of Trump’s entanglement with Florida Attorney General Pam Bondi certainly sounds like a classic pay-for-play scheme. In the fall of 2013, Bondi’s office was reviewing whether to pursue fraud charges against Trump University, which involved the mogul’s real estate training seminar that disillusioned students claimed had scammed them out of thousands of dollars. Then the Donald J. Trump Foundation made a $25,000 donation to a political group connected to Bondi, who was gearing up to run for re-election.

Four days later, Bondi announced she would not pursue charges against Trump University, thereby saving Trump potentially millions of dollars in legal fees, fines and settlement costs. She went on to win re-election in 2014 by roughly 750,000 votes.

In June the Associated Press revealed that Bondi had called Trump to solicit a donation from him a few weeks before his foundation cut her that $25,000 check. So while there is certainly no proof that Bondi announced she was considering charges against Trump University in a very unsubtle effort to goose Trump into cutting that check (and her spokesman denied that she even knew about the complaints against Trump U when she solicited the donation), the timing of it all is enormously sketchy.

Trump has claimed that he and Bondi never spoke about the fraud charges when she called him in the summer of 2013 to solicit a donation. And unless a recording of the phone call turns up, there is no way to prove otherwise, even if the events line up so neatly that Anthony Kennedy might be suspicious.

Nonetheless, Trump and Bondi have continued their highly symbiotic relationship, with Bondi endorsing his presidential candidacy and playing attack dog against Hillary Clinton in a stem-winder of a speech at the Republican National Convention a few weeks ago.

There are obvious reasons why Trump would deny that he engaged in a pay-for-play scheme. Since the donation turned out to be illegal (charitable foundations cannot donate money to political candidates) and Trump had to pay a $2,500 fine plus reimburse his foundation the entire $25,000 from his personal fund, maybe he thinks there is still some legal jeopardy. Maybe he is thinking like a regular politician, who sees this issue as a “distraction” from his campaign, one he would like to put behind him.

Still, if the charges are true, to think that Trump isn’t itching to brag about how he bribed his way out of trouble with what amounts to pocket change for him, one has to believe he possesses a sense of shame and self-awareness that he has rarely if ever shown before. Sure, it would be enormous hypocrisy on his part to keep attacking Hillary Clinton with unproven allegations that she used her family’s foundation as a slush fund to enrich herself when Trump used his own foundation as a slush fund for protection against lawsuits. But since when has hypocrisy ever embarrassed Donald Trump?

Maybe the grind of a presidential campaign has just caused Trump to lose his edge. Sad!