Veteran with PTSD responds to Trump's incorrect fact-check of veteran suicides: "Yet again we are going to stigmatize veterans" 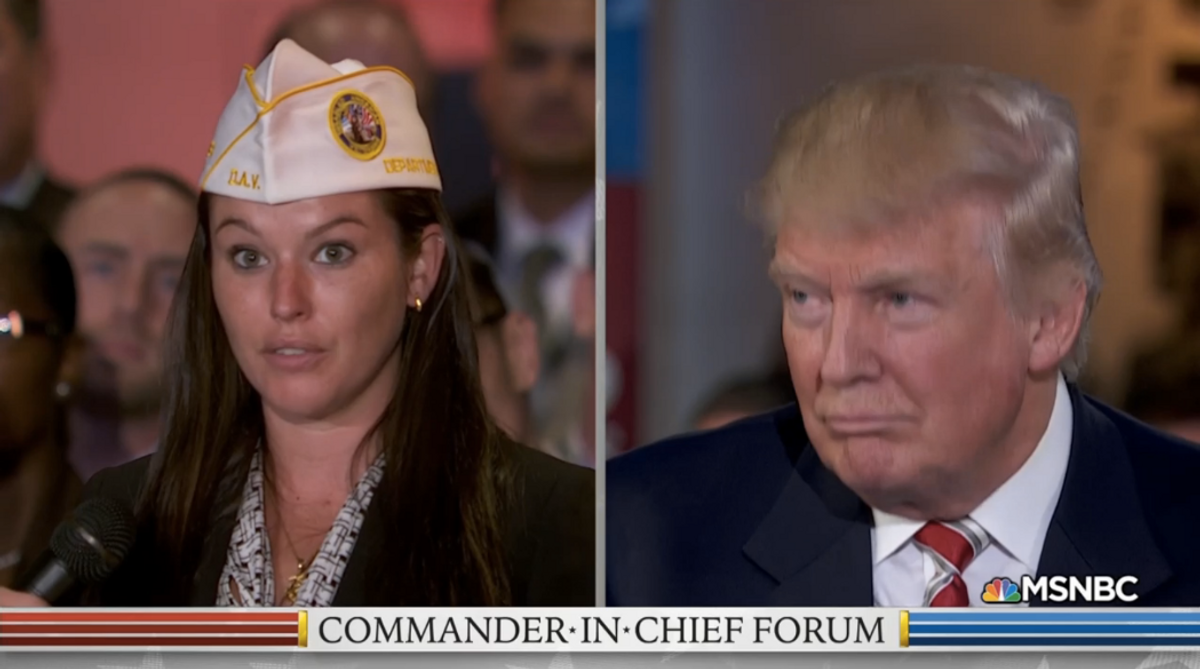 Rachel Fredericks, a veteran of the United States Marine Corps., was an aviation operations specialist from 2008 to 2010. According to her NBC News introduction, the undecided Republican has lost two friends to suicide and suffers from post-traumatic stress.

"Mr. Trump, I wanted to ask what your plan will be to stop 20 veterans a day from killing themselves," Fredricks asked the GOP nominee.

“Actually, it’s 22,” Trump incorrectly replied. “It’s almost impossible to conceive that this is happening in our country.”

After the veteran and two men seated behind her shook their heads and seemed to mouth disapproval, the GOP nominee added a more flexible, "20 to 22 people a day are killing themselves."

Although the rate of veterans suicide was previously estimated to be 22 a day, the Department of Veterans' Affairs updated that number to 20 in July.

Trump went on to say that veterans are “killing themselves over the fact that they’re in tremendous pain and they can’t see a doctor,” promising to make veteran care “efficient” and “good.”

Asked how she felt about Trump's response during a follow-up special on MSNBC, Fredricks revealed that despite being a Republican who is leaning toward voting for Trump, she wasn't impressed with his answer and blamed his tone for further stigmatizing veterans.

"He kept saying, 'they need help, they need help," Fredericks noted. "I think everyone in America need some time of help, but yet again, we are going to stigmatize the veterans who are suffering with mental health diseases or PTSD," she said. "They need help."

"It didn't answer what we are going to do to stop it."

Watch her reaction to Trump's response below, via MSNBC: