"What is Aleppo?": Gary Johnson stumped speechless by simple question on Syrian conflict 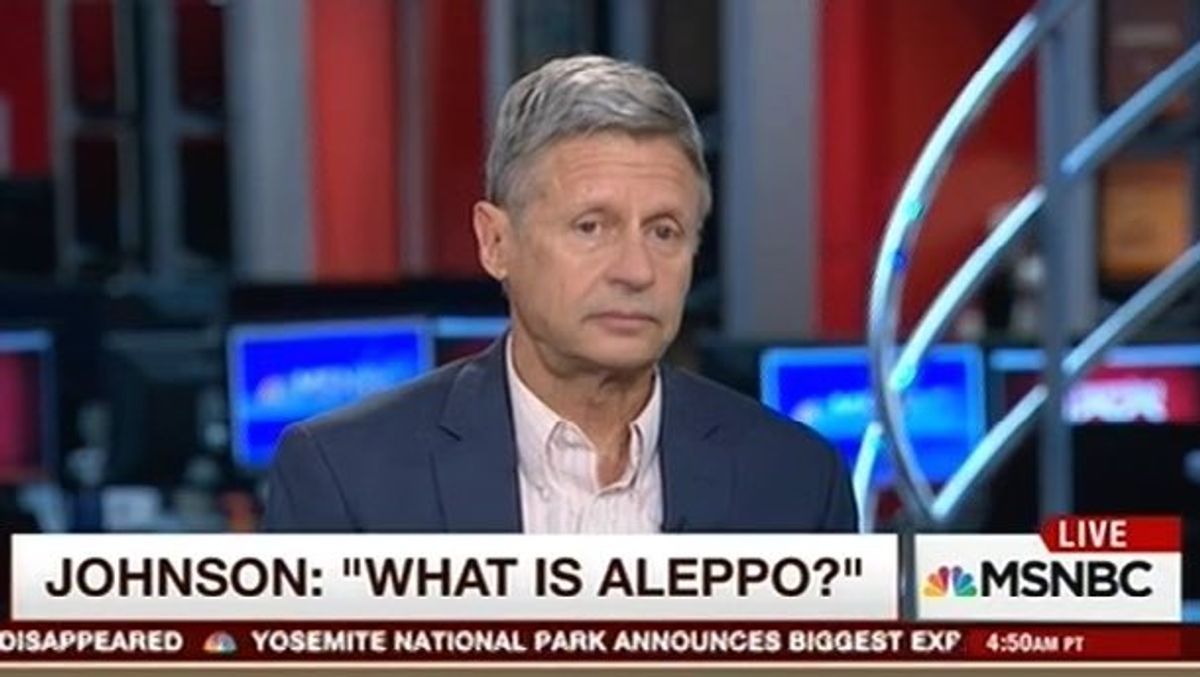 Libertarian presidential candidate Gary Johnson may be beginning to rise in national polls in just enough time to make the presidential debate cut-off, but after a stunning performance on Thursday's "Morning Joe," the former New Mexico governor should truly be worried about the viability of his third party run.

"This is incredible depressing," MSNBC contributor Elise Jordan, a Johnson supporter, said after the presidential candidate left the MSNBC set. "I think it would be hypocritical of me to support Gary Johnson after I've been beating up on Donald Trump for his lack of basic knowledge," she said, adding, "I don't know where I'm left."

Jordan, like her "Morning Joe" colleagues, was left flabbergasted by Johnson's lack of a response to a very simple question on the Syrian conflict.

"What would you do, if you were elected, about Aleppo," co-host Mike Barnicle asked Johnson.

"About ...." Johnson inquired with a puzzled look on his face.

"And what is Aleppo," Johnson let out with a blank stare.

"Aleppo is in Syria," Barnicle explained. "It is the epicenter of the the refugee crisis."

“OK, got it, got it!” Johnson finally said, before offering "that we deal with Syria is to join hands with Russia to diplomatically bring that at an end."

"You asked, 'What is Aleppo?' Do you really think that foreign policy is so insignificant that somebody running for president of the United States shouldn't even know what Aleppo is, where Aleppo is, why Aleppo is so important?" a stunned Joe Scarborough pressed.
"No, I do understand Aleppo and I understand the crisis that is going on," Johnson responded. "But when we involve ourselves militarily, when we involve ourselves in these humanitarian issues, issues, we end up with a situation that in most cases is not better, and in many cases ends up being worse."

Watch the incredible exchange below, via MSNBC:

"I'm incredibly frustrated with myself," Johnson admitted to Bloomberg's Mark Halperin in the hallway after his disastrous "Morning Joe" interview.