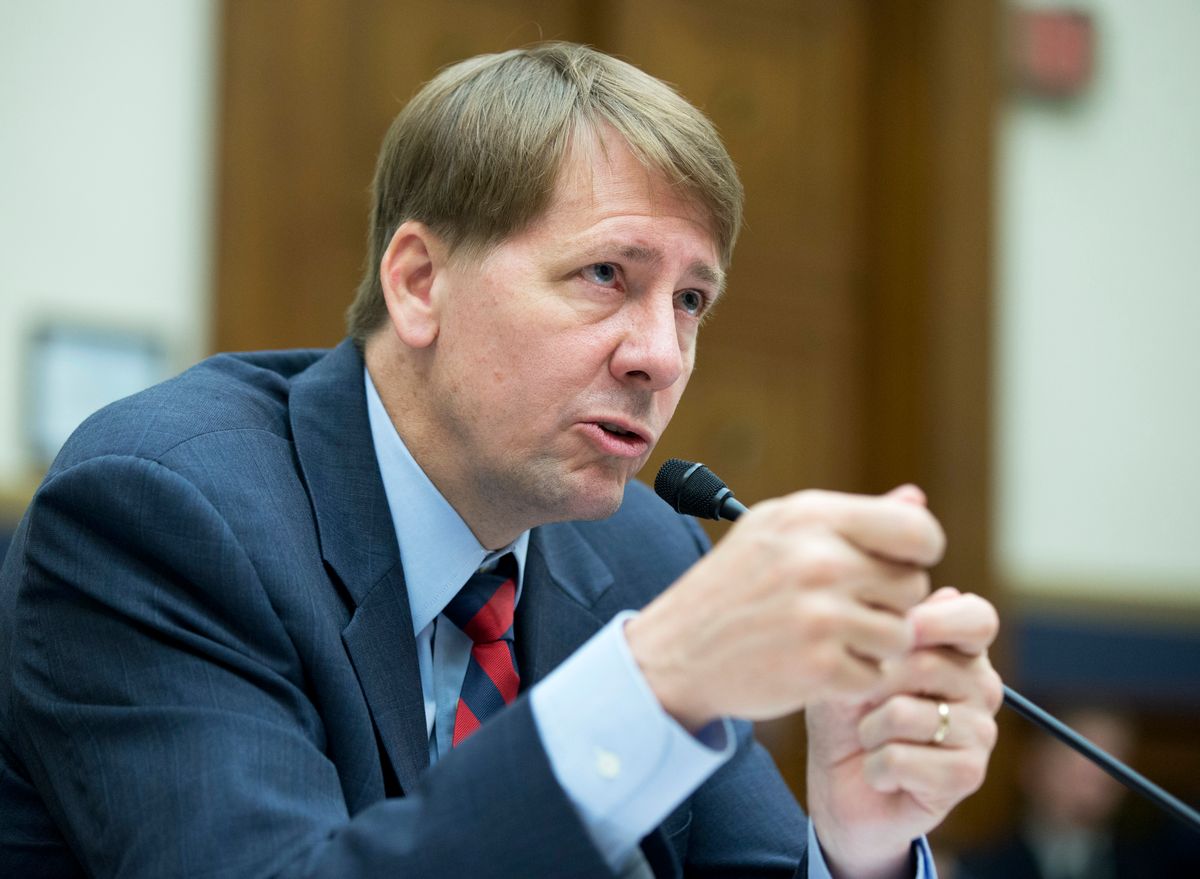 FILE - In this Sept. 12, 2013 file photo, Consumer Financial Protection Bureau (CFPB) Director Richard Cordray testifies on Capitol Hill in Washington. The CFPB on Thursday, June 25, 2015 is releasing the first batch of its highly awaited database of consumer complaints filed against local banks, credit card and mortgage companies. The 7,700 public narratives, collected starting in March 2015, are only a fraction of the 627,000 complaints the bureau has fielded since its inauguration in 2011. (AP Photo/Manuel Balce Ceneta, File) (AP)
--

For those who can drag their eyes away from the ongoing 2016 election shambles, the big news coming out of Washington this week was the fine the Consumer Financial Protection Bureau slapped on Wells Fargo for fraudulent banking practices. Per the agency's press release, Wells Fargo employees “opened roughly 1.5 million deposit accounts that may not have been authorized by consumers” and “applied for roughly 565,000 credit card accounts that may not have been authorized by consumers.” This was done over a period of several years, and the infractions were committed as part of aggressive “compensation incentive programs for its employees that encouraged them to sign up existing clients for deposit accounts.”

Wells Fargo will have to pay a $100 million fine levied by Consumer Financial Protection Bureau, as well as $55 million to the city of Los Angeles and $35 million to the Office of the Comptroller of the Currency. The bank also has to pay $5 million in restitution to customers who were affected by the widespread fraud. It’s the largest financial penalty the consumer protection agency and it shows its value and how the it's to employ different means of leverage to change the culture of banking.

Consumer advocacy groups are thrilled with the action and see it as something that could have come about only with a federal consumer watchdog group actively monitoring the banks. “The scope of the misconduct at Wells Fargo toward consumers is truly astounding, and the compensation and firings occurring there in response are more than appropriate,” Public Citizen’s Lisa Gilbert said in a statement to Salon. “This is yet another instance where we can be thankful for our new consumer watchdog, the CFPB.”

Much of the media coverage surrounding the Wells Fargo fine centers on both the historic nature of the penalty and the fact that more than 5,000 Wells Fargo employees have been fired in connection with the scandal. When we talk about this in terms of accountability, though, we have to throw in some important context.

First off, Wells Fargo will have zero difficulty paying $185 million in fines — the bank raked in $5.56 billion in profits in this year's second quarter alone. Second, as Alan Pyke writes at ThinkProgress, the workers who got canned weren’t “pinstriped limo-riders who light cigars with hundred dollar bills.” They were retail bank employees: the people who were relentlessly pressured by Wells Fargo higher-ups to meet wildly aggressive sales quotas. The executives and midlevel managers who devised and implemented the strategy that precipitated this wave of fraudulent transactions are, by all accounts, still at the company.

According to consumer watchdogs, what the CFPB plans to accomplish through this action is to force change, partly through financial penalties but also through good old-fashioned shame. “The head executive of [Wells Fargo, John Stumpf], he’s going to be going to parties, he’s going to be going to events, his bank’s name has been sullied,” said Ed Mierzwinski, consumer program director at U.S. Public Interest Research Group. “Penalizing Wells Fargo is partly a matter of the money, but it’s also partly a matter of having their name dragged through the mud.”

The Consumer Financial Protection Bureau order imposing the fine also requires Wells Fargo to hire an agency-approved independent consultant to conduct an overview of its sales practices and determine if they are in compliance with federal consumer protection laws. And it mandates that the Wells Fargo board of directors take an active role in enacting whatever changes are recommended by the independent review, monitoring their implementation and assisting agency in providing oversight.

The hope is that the combination of bad press, the threat of larger financial penalties in the future and whip-cracking on company brass will help remake the banking culture. “I absolutely think that this is a big thing that’s going to make a difference,” Mierzwinski told me, “not just at Wells Fargo, but across the industry.”

The only way that will happen, though, is if the Consumer Financial Protection Bureau is around to thump skulls and levy fines on banks that would be tempted to engage in this sort of behavior. Republicans in Congress have loudly attacked the agency and made promises to obliterate it at their first opportunity.

GOP presidential nominee Donald Trump has vowed to “dismantle” the Dodd-Frank financial reform law that created the agency. It is clear at this point, though, that abuses like the ones committed by Wells Fargo would be easier to perpetrate and get away with absent the presence of a watchdog like the Consumer Financial Protection Bureau.