What you missed during the Matt Lauer forum: The elephant in the room is our future in Iraq

The big questions that Hillary must address: What are our troops are still in doing in Iraq? And for how long? 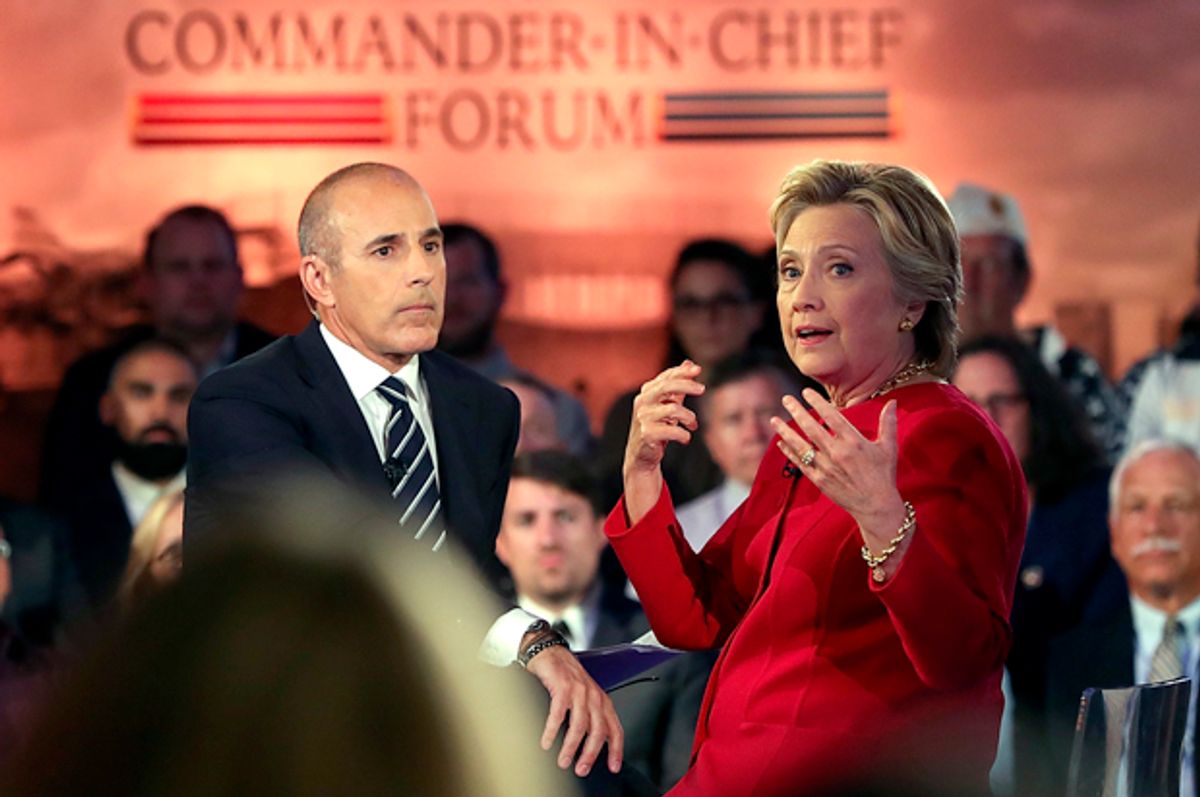 Most of the commentary about Wednesday night’s Commander-in-Chief Forum with the two major-party presidential candidates focused on Matt Lauer’s questions and Republican presidential nominee Donald Trump’s egregious lying. Which is fine because those elements were terrible and should have been criticized to high heaven.

But we should not allow that criticism to obscure some comments from Democratic presidential nominee Hillary Clinton toward the end of her time on the stage. Asked by audience member and former Army Captain Ernie Young how she will “determine when and where to deploy troops directly into harm’s way, especially to combat ISIS,” Clinton answered,

We’re going to work to make sure that they [Iraqi and Kurdish forces] have the support — they have special forces, as you know, they have enablers, they have surveillance, intelligence, reconnaissance help.

Clinton emphasized that defeating ISIS is her No. 1 counterterrorism priority. To that end, “we have built up several thousands of the folks that I’ve talked about who are assisting in the fight against ISIS,” she said. Those several thousand folks are providing the “help” in surveillance, intelligence and other areas that she had mentioned a moment before.

This was the exact kind of answer one would expect from a politician who wants to de-emphasize the number of American troops deployed in a foreign country, especially a country that the last of the nation’s soldiers pulled out of at the end of 2011. Call them “support personnel,” call them “help,” just don’t call them “ground troops” or anything that might require admitting that we have sent soldiers back to Iraq. And those soldiers, far from acting in advisory roles far from combat, are on the front lines, getting injured and killed.

They are not supposed to be, of course. But the lines in a place like Iraq aren’t so clear-cut. For example, Navy SEAL Charles Keating IV happened to be visiting a Kurdish peshmerga encampment at the wrong moment when ISIS forces attacked it. According to the military, Joshua Wheeler was not supposed to lead the Kurdish troops he had been training on the dangerous mission that got him killed. But it is apparently common for Delta Force soldiers to do just that.

The Obama administration has never wanted to talk about the number of troops it has been sending back to Iraq in the two years since it began an air war against the Islamic State. But there are now somewhere around 5,400 soldiers there, almost five years after they had all left Iraq. At the time, Clinton is said to have encouraged the president to leave troops in the country as a sort of residual force, but the president decided against doing so.

Since a Clinton's presidency would represent a continuation of the current administration’s policy and possibly an escalation of it, the country should be having a serious discussion about this. What are our troops doing back in Iraq? How long do we expect them to stay? Certainly defeating ISIS is a good and worthy goal. But what is the true cost the nation will have to expend to do so?

It is Clinton’s great good fortune to have an opposing party as ridiculous as the Republican one. The GOP chairman, Reince Priebus, tweeted after the forum that Clinton needs to smile more, a grossly sexist statement for which he was rightly pilloried but which distracts from any kind of debate of policy.

Meanwhile, Priebus’ candidate has an even more ridiculous policy towards Iraq, to the extent that he can be said to have any policy at all. As best anyone could tell from watching Wednesday night’s forum, Trump’s foreign policy could be summed up as the “Kick some ass and chew some gum, and we’re all out of gum” doctrine. It consists mostly of indiscriminately bombing most of Iraq and Syria and seizing all of Iraq’s oil, which would likely not sit well with Iraq, seeing as how it's our ally.

Unfortunately, with our optics-obsessed political press, the focus on Trump’s ignorance and Lauer’s incompetence means that serious questions surrounding our nation’s activities in and policies toward Iraq are not getting the airing that they deserve. It would be nice if we found a way to change that in the 60 days before the election, though I’m not holding my breath.