Trans movies are almost never made for us, or by us. It's time to stop talking about why that's bad, and do better 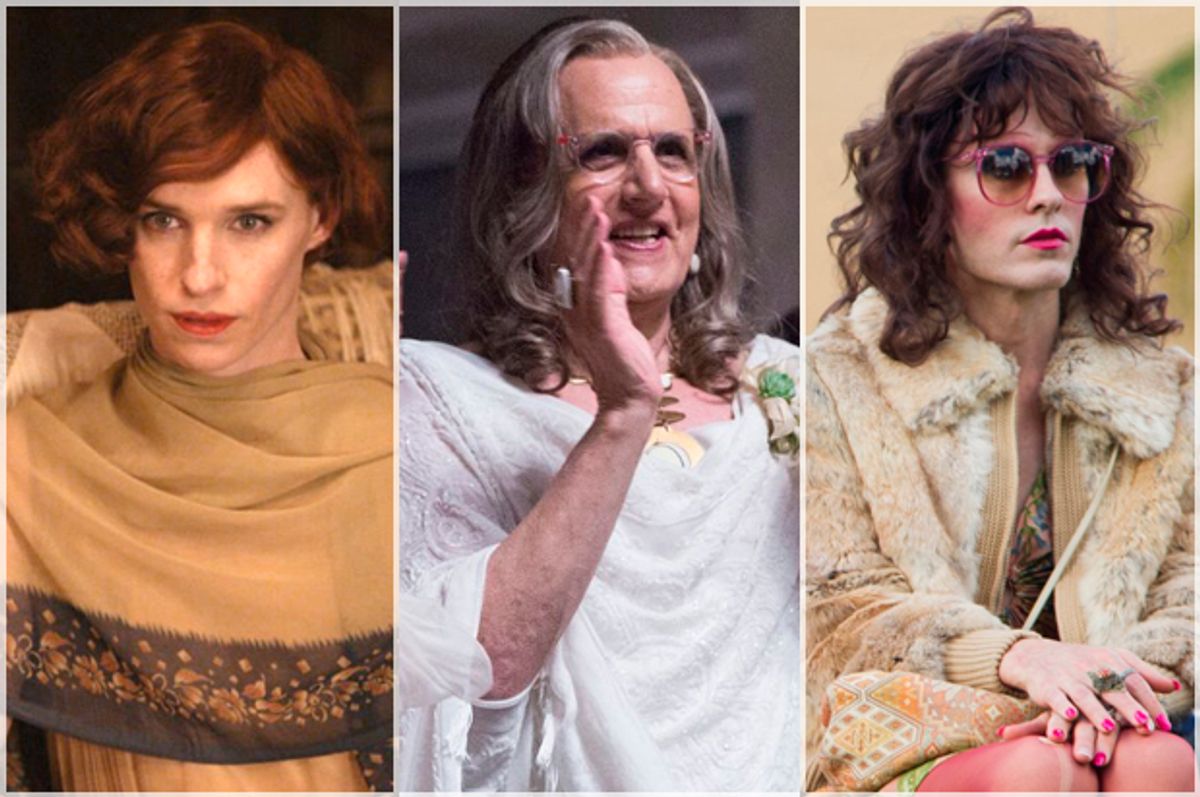 Last week, things got rough for Mark Ruffalo. LGBTQ Twitter didn’t take kindly to the news that yet another non-trans actor would be assuming a trans role in a film. This time around, it was Matt Bomer, who was cast as a trans woman in the recently announced film, "Anything." Executive produced by Ruffalo, "Anything" centers on a trans sex worker (Bomer) and her friendship with a grieving, suicidal man (John Lynch).

Trans actress Jen Richards ("Her Story"), who auditioned for another role in the film, shared, “I auditioned for this [film]. I told them they shouldn’t have a cis man play a trans woman. They didn’t care.”

In response to the outrage, Mark Ruffalo tweeted, “To the Trans community. I hear you. It’s wrenching to you see you in this pain. I am glad we are having this conversation. It’s time.” And then, “In all honesty I suggested Matt for the role after the profound experience I had with him while making 'The Normal Heart'."

In one response, he explained the film was already in post-production, pleading, “Matt poured his heart and soul into this part. Please have a little compassion. We are all learning.” Later, he reveled in getting “woke to the Transgender Experience” and somewhat ironically linked to "We’ve Been Around," Rhys Ernst’s lovely mini docu-series about how transgender people have literally always existed. Ruffalo is late to the party — but welcome!

All sensors indicate Mark Ruffalo is a well-intentioned, conscientious dude. He founded his own clean-water nonprofit, tweets vigorously about social and political issues, and I’d probably cast him to be my celebrity Dad. So what did he miss here?

There is a strain of angst in progressive allies like Ruffalo regarding the negative public feedback about benevolent attempts to tell trans stories without trans people. As a media-saturated, 23-year-old trans writer, I would like to clarify some points regarding trans representation:

Director of GLAAD’s Transgender Media program Nick Adams responded to Bomer’s casting in a recent editorial, arguing that cisgender male actors playing trans women teaches viewers that being trans is “just a matter of playing dress-up,” and that a “transgender woman really is a man.”

Adams points out that trans performers have led or featured in many recent successful media projects, citing "I Am Jazz," "Sense8," "Transparent" and "Orange Is the New Black"'s Laverne Cox’s upcoming CBS series, "Doubt." And yet, as he writes, “Hollywood is having a very difficult time letting go of the idea that putting a male actor in a dress, wig and makeup is an accurate portrayal of a transgender woman.”

However progressive TV might be, Hollywood lags behind. Trans stories have only recently been legitimized as wide-release films like "The Danish Girl" and only with bankable actors, like Eddie Redmayne or Jared Leto, cast in trans roles. While I have no doubt that trans stereotypes exist in Hollywood, there are many other systematic components that favor casting an actor like Bomer over a trans unknown.

Julia Serano, biologist, trans woman, and author of the mind-splintering essay collection "Whipping Girl," recently wrote about the issue on Medium. Serano asserts that the question of trans representation has become a kind of meme that “offers a simplistic solution (don’t cast cis actors!) to the extraordinarily complex issue of transgender stereotypes and media representations.”

In regards to Adam’s point about reinforcing toxic stereotypes, Serano argues that the gender identity of an actor isn’t necessarily essential to an “authentic” and resonant portrayal of a trans person. Actors are only superficial targets, and the conversation needs to go deeper. Serano urges, for example, casting trans performers in cisgender roles.

In its weakest form, “the conversation” is a kind of classic damage-control phenomenon that follows many public outcries of legitimate concern. It is, sadly, often a consolation prize for change. Having or continuing a "conversation" allows people who make media about trans people, without trans people, to brush off criticism and perpetuate false promises. More to the point, conversations generally center around the one episode or issue currently under scrutiny, when we need a much larger, more expansive discussion.

A strong, sincere discussion really can raise awareness and instigate change. And that’s why I don’t care that much about reversing Bomer’s casting or boycotting the film. I don’t want Mark Ruffalo to statically react and apologize to a one-note issue. I want him to genuinely wake up to the reality of disparities in trans employment and authorship in media.

"Transparent" is a good example of the nuances inherent in trans representation at its forefront. The show’s creator Jill Soloway envisioned the lead role of trans matriarch Maura for actor Jeffrey Tambor, and cast it thus. But Soloway also hired (and maintains) a production team, crew and writer’s room loaded with queer and trans identities. She took the issue of representation seriously rather than brushing it aside, because she knew it was good for the quality of her show and for the talented trans folk in her employ and beyond.

So who is empowering young trans people like me to feel like this part of identity is worth sharing, or that my stories are worth telling, long-term?

Representation does not only mean movies about trans people, but also movies with trans people. It is about supporting trans people’s participation and success in a sphere in which they have previously been expelled, mocked or ignored. It is championing the full complexity of representation — and engaging that complexity without tapping out — that can tire even the sturdiest of allies and trans folk alike. (The difference? We don’t get to tap out of the conversation.)

So I’ll keep being positive and frustrated at the same time. Because I know we will do better, and I know Mark Ruffalo can handle a call-out. In fact, I challenge him to.

Donald Collins is a culture writer and trans advocate from Virginia. Beacon Press will publish his first book, a collaborative memoir, in 2017. You can find more of his work at donaldcollins.me.