Trump and the media: An outrageous celebu-candidate, plus the debased culture of journalism, produced this disaster

Is the media to blame for Trump? Not exactly. But Matt Lauer's craven idiocy highlights its massive failure 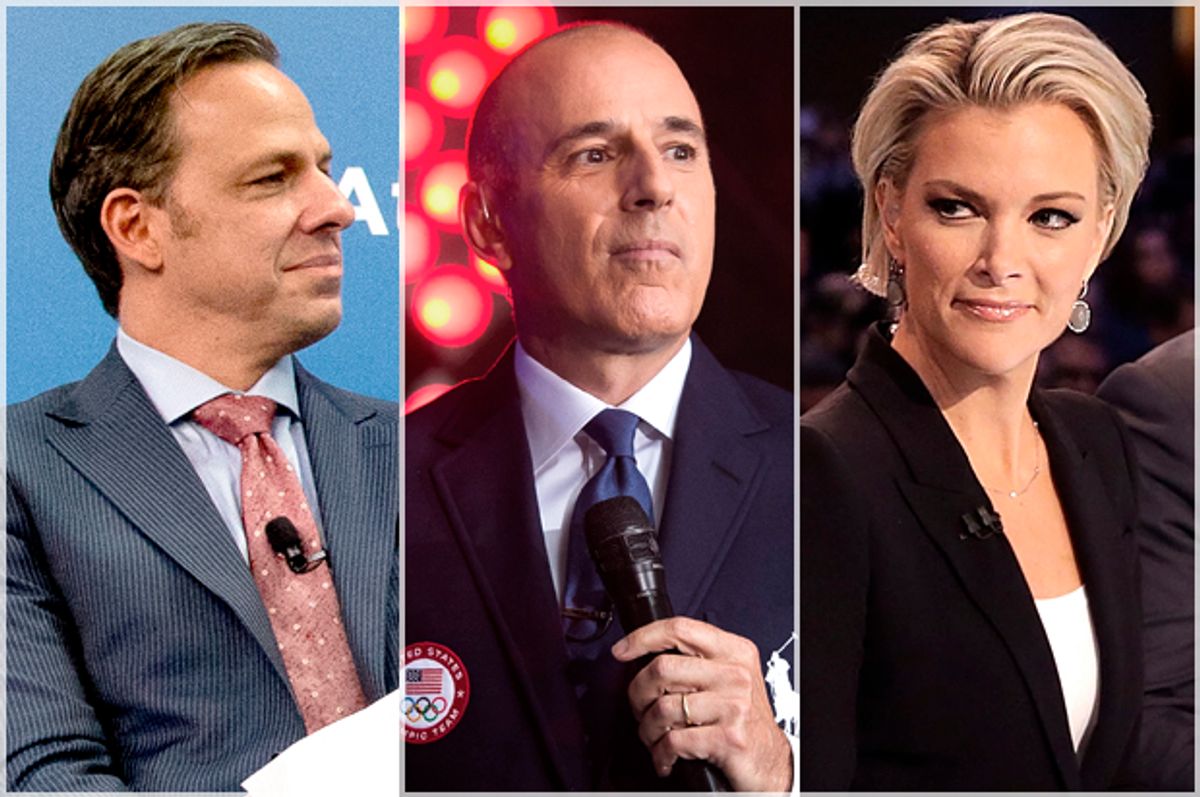 In the wake of Matt Lauer’s dismal performance as moderator and/or Trump-enabler during this week’s presidential campaign forum, we’ve gotten to experience another round of hand-wringing about the nature of the parasitic or symbiotic relationship between the Republican nominee and the media. Most of this hand-wringing occurred in the media, of course, and there’s nothing the members of that tribe (OK, it’s my tribe too) enjoy more than inflating their own importance, gazing into their navels at great length and telling each other to repent of their evil ways and don sackcloth and ashes.

Still, there are important questions at play here, in a year when American democracy seems to be on the critical list and journalists seem torn between playing doctor, playing priest and playing the drunk guy at the wake who barely knew the deceased but makes a long speech anyway. (That was a deeply Irish analogy; I apologize.) Some of the questions are obvious and have easy answers: Matt Lauer is a lightweight TV personality (i.e., an idiot) who should never have been allowed near such an important gig, and everybody who approved that idea should immediately be reassigned to “Weather and Traffic on the 6’s” at the third-biggest market in Tennessee.

Other questions are more complicated: Why haven’t journalists done their jobs with respect to Donald Trump — easily the least qualified presidential candidate in the history of everything? If Lauer was especially craven in his desire to look impartial and his unwillingness to ask Trump any meaningful follow-up questions or challenge outrageous falsehoods, he’s not alone. Jake Tapper of CNN, whom I know to be a journalist of decency and integrity (he was once Salon’s Washington correspondent), has defended his courteous demeanor toward Trump as both fair and necessary. But Tapper’s measured, cordial interviews with Trump have undeniably played into the candidate’s hands and burnished his image, at least in a semiotic sense: Never mind the nonsensical content of Trump’s responses; there he is chatting amiably with a CNN anchor, looking more or less “presidential.”

Even Megyn Kelly’s feud with Trump, back in the days when Roger Ailes still ran Fox News (and badly wanted some other Republican to win), ended in retreat and confusion. Trump’s ugly, misogynistic attacks on Fox’s star anchor briefly made Kelly into an unlikely feminist hero and threatened to torpedo Trump’s campaign early in the cycle. But Kelly was stilted and awkward in her later interactions with Trump, first as a debate moderator and then in a one-on-one interview. She seemed trapped between competing roles and competing demands: She was a journalist with a reputation for straight shooting, she was an accidental symbol of American womanhood and she was the leading voice of a right-wing network whose audience was eager to swallow Trump’s snake oil. At least you could tell Kelly really wanted to rip Trump’s face off, while Lauer just looked defeated and confused and Tapper was too consumed in perfecting his Sam Donaldson impression.

But let’s get back to the questions: What if some journalists have done their jobs, and it’s just that the public hasn’t noticed or doesn’t care? What is the media’s job in 2016, anyway? How has that changed, and why? Are we entertainers, public servants, speakers of truth to power or flunkeys on the outer edges of celebrity culture? Are we responsible for inflicting this dangerous buffoon on the country in some significant way, or are we just along for the ride?

I don’t think any of those have entirely straightforward answers, but my conclusion (self-serving as it may be) is that blaming the media for the rise of Donald Trump is a form of lazy intellectual shorthand that avoids the larger cultural, political and economic picture. It’s not entirely false, because Trump could not possibly be where he is today without the endless amounts of airtime and verbiage and bandwidth devoted to his unlikely ascendancy. But the media, and even the “corporate media,” is not some baleful monolith operating all by itself, with no context. The “Human Centipede”-style dialectic between Trump and the media, where he feeds us and we feed him — if you click that link, don’t say you weren’t warned — is fueled by intense demand on all sides. People who love Trump want more Trump to love, people who hate Trump want more to hate, and people who think we cover Trump way too much want more Trump coverage to excoriate.

Donald Trump and the media was a marriage made in heaven, or perhaps in the other place. To use Marxist terminology, it was overdetermined — driven by external and inexorable factors no one could control. Once they were together, there was no tearing them apart. If you want to argue that mainstream journalism in the United States is often mendacious and shallow, too easily distracted by meaningless scandal, false drama or superficial factoids to pay attention to what’s really going on, I’m right there with you. Has Trump’s erratic and outrageous campaign persona appealed to many of the mainstream media’s worst instincts? Absolutely. Has Trump exploited a longtime institutional weakness in the media, its internal conflict between an increasingly outmoded ethical code and a ravenous appetite for ratings at any cost? Yes, with almost surgical precision. (I’m talking to you, Jake Tapper.)

Dan Rather, who can remember every presidential campaign since Franklin D. Roosevelt’s fourth and final run in 1944, recently told Chris Hayes of MSNBC that Trump can dominate and manipulate the news cycle more effectively than any candidate he’s ever seen. Trump doesn’t always do so to his own benefit, but even when he contradicts himself, spins outrageous lies or insults the grieving parents of a fallen American soldier, he sucks up all the oxygen in the media-sphere and keeps his opponents off the stage. Trump’s farcical jaunt to Mexico City last week, followed by his rage-fueled immigration speech in Phoenix, succeeded in shoving a supposedly major foreign-policy speech by Hillary Clinton into limbo.

But when Clinton supporters wonder plaintively why the media hasn’t told the truth about Trump’s hateful and incoherent proposals or his dreadful record as a person and a businessman, I would say that many reporters and commentators have done that repeatedly, and Trump’s supporters either don’t believe it, don’t notice or don’t care. (Some of all three, but mostly the latter.) Anyone who waded through the long New York Times investigative article about Trump’s disastrous business operations in Atlantic City, for instance, wasn’t voting for him anyway.

When agonized Democrats retreat to the opposite rhetorical corner — if only the media had ignored Trump from the beginning, he might have gone away! — well, now they know how Jeb Bush felt. That one requires an elaborate alternate universe: If we didn’t live in a consumer-capitalist society where everyone walks around glued to screens all day long desperate for sensation, or in a nation with a paralyzed political system that is profoundly divided by race, economics, geography and culture, then sure. But there’s no Trump in that universe in the first place.

As I have previously argued, it’s too simplistic to say that the media created Trump, or willed him to win because he was telegenic. Trump was the right guy (or the wrong guy) to capture the attention of a large and disgruntled demographic of downscale white voters at this historical moment. Conditions had to be right, particularly the zombie-like brain-body split within the Republican Party, whose electoral base had turned against its Washington leadership. CNN and Fox News and the New York Times didn’t compel all those people to show up at Trump’s rallies or drive the turnout in state after state that produced the most votes for any candidate in GOP history. Donald Trump ran for president and millions of Americans responded with enthusiasm. It’s no good pretending they’re a bunch of brainwashed sheeple who didn’t understand what he was really like. They understood perfectly well, and they dug it.

At the same time, Trump is a media creature, who came to the 2016 race as a prefabricated personality, molded by years of reality TV, gossip shows, the business press and the New York tabloids. Trump knows almost nothing about government or world affairs or any aspect of foreign or domestic policy, and his expertise in business is debatable. But he understands the media, at least in its mass-consumption mode: He understands its cynical cast of mind and its widespread contempt for the public. He understands its ingrained belief that American cultural and political life is a symbolic spectacle with little reference to the real world. He understands its obsession with itself, a quality he shares.

There’s no question that Trump coverage has driven ratings and page views, which has driven more Trump coverage. Love her or hate her, Hillary Clinton is simply not capable of moving the dial to that extent — unless she’s being subjected to a public pillory about Benghazi and the emails, as Lauer feebly tried to do on Wednesday night. But that didn’t happen because I decided, or because Jake Tapper and Megyn Kelly decided, that we couldn’t possibly get enough Trump and wanted to cover nothing else week after week. It happened because we have a sick democracy, a debased standard of public discourse and a deeply damaged culture. All of that came together in one awful man and his awful presidential campaign, and none of us can look away.