What we tell our sons about rape

On a visit to my mother's old school, I snap at my teens' tasteless jokes. They haven't heard her story yet 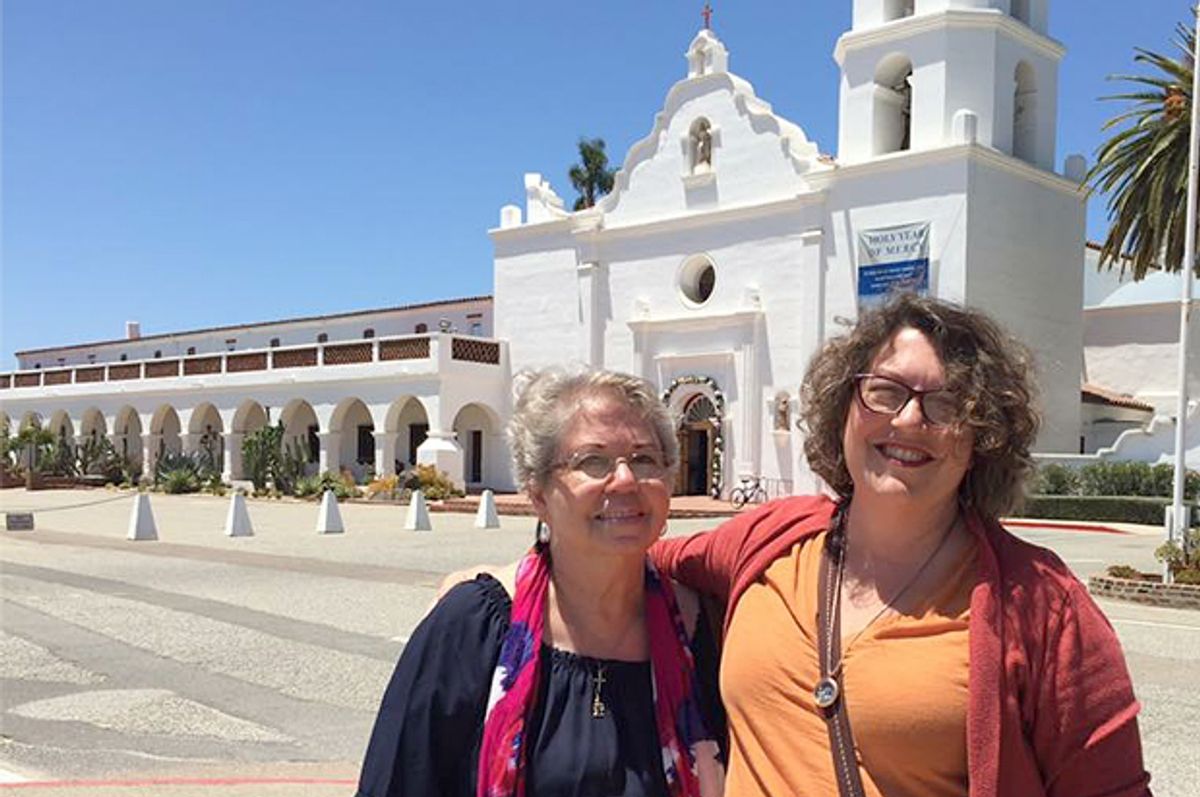 A photo of the author with her mother.
--

My mom and I are walking in a big circle, covering the grounds of the last school that she attended, when she was twelve. Our feet kick up clouds of dust as we search for any entrance. To our left, remote but on the same piece of property, is the Mission San Luis Rey, a white behemoth brightened by lush flowering shrubs and trees. Here, the Old Mission Montessori school is recently closed, enrollment numbers having plummeted.

Once it was a boarding school. Every day, she and the others would get up at five a.m. to trudge sleepily across the campus to the Mission chapel for morning mass. The cluster of buildings are now vacant and locked, chain link guarding the interior courtyards like a secret.

My mother tells me this is where her parents sent her: after the rape; after the trial.

They had tried other, more local schools, but they could not make her go. At boarding school, attended by nuns and priests, she would be required to.

My two sons, ages 16 and 13, wander the grounds with us. Two of their friends are with us as well. Four teenaged boys.

My mom and I mug for the camera, my oldest son taking a picture of us with the dorms in the background. We are on our way home from a family vacation to San Diego. This visit is a side trip, taking us a little out of the way, but not too much. Worth it, I think. My mom’s memories of this place, however bitter the reasons for being sent here, are some of the best of her childhood.

Her mother, my namesake, was an alcoholic in that classic heartsick way: I picture her draped casually across the sofa, passed out, bottle of booze inches from her fingers on its side on the floor. My mother's father was long dead, gone at the age of 39 after building a career that brought him wealth and a modest degree of fame. They had been madly in love; I still have some of his love letters. After his death, she remarried the man I would later know as my grandfather; a good man who loved her, but it was never the same.

On the cusp of becoming a teenager, reeling from trauma, my mom had no interest in school. For months on end, my mom would sneak out to use the one pay phone to beg her mother to come get her. My grandmother always said no. My mother was one of the few who stayed through weekends and holidays; those left to help the nuns clean the chalk boards and smack erasers, and scrub the latrines and sinks.

My mom shows me where the phone booth used to be, the outbuilding that used to be a snack shop, points to the second floor toward her old shared room. She seems happy to be here.

The boys find a bench with a bronze sculpture of a saint at one end, seated, looking pious, his arm raised plaintively to the sky, palm upturned. The boys sit on the bench beside him. My youngest sits on the statue’s lap and asks for a photograph. I oblige.

His friend says, “Now pretend he just raped you.” They all laugh.

My stomach churns and I snap. There are to be no rape jokes.

Of course, they don’t get it. I have not told them. Why haven’t I told them?

My mom spots a maintenance man and catches him. He tells us the building is locked today.

We had hoped to see inside. We continue circling the building, and across the courtyard, through chain link, I spot a woman carrying a book. I wave and she approaches. She had been a teacher there, and was here today for a Bible study group. We tell her our story. Yes, she will let us in. Yes, she will show us around.

The woman disappears, but soon the front doors open and we are escorted through. Children’s artwork still hangs on the walls, rooms still marked with purpose.

Down the long hall, a mural of Father Junipero Serra, a small indigenous boy at his side. Here, Serra appears merciful, benign; the boy, however, at least to my eyes, seems just a bit reticent, perhaps skeptical of the Father’s intentions.

Here, my mom seems to feel at ease, though I wonder truly what it must feel like to be here. How much of what we remember becomes mythologized? I consider this. Here, she occupied a space between where she had come from and where she might go, and it’s here that I sense her roads forked; she took a path that led her one way, toward me, rather than one that might have taken her toward a different sort of life.

Why did her mother not respond to her pleas to come home? I picture my grandmother trying to forget her daughter.

Today, my mother is dressed up, and she could be any one of those good Catholic school girls who grew up to marry a good Catholic boy. She is not herself today. My mom is hard to read. I recognize this closing off, the facade of seeming rather than being.

My mom’s best friend growing up was the daughter of a prostitute. Neighbors, the girls were fast friends. One day, the girls decide to go to the movies.

Four teenage boys, strangers, join them in the theater. The boys talk to the girls. Afterward, the boys invite both of the girls to walk with them, go back to one of their homes, to keep up the conversation. My mother’s friend declines, walks home. My mother accepts their offer.

I will never know the details. I imagine the boys cornering my eleven-year-old mother in a back room, then, one by one, taking turns.

My mother never told me any of this.

I learn this only once I am an adult, by way of a cousin who had heard it from her mother. In disbelief, denial, I ask my mom. She confirms.

I begin to tell him the story. He waves his hand, looks away as if to say he’s heard enough.

He and his friends are nearly the age of those long-ago teenage boys.

Whose sons were they? What did their mothers say?

There are no more rape jokes that day.

In an alcoholic stupor, my mother’s mother finally relents, sends one of her sons to bring her daughter home.

Months from then, my mother will meet my father. My mother will never return to school again. At 13, with the blessing of their parents, the young couple will try to marry; at 16, they will succeed. At 23, she will have me.

I sometimes think about what might have happened with those long-ago teenage boys, the ones who raped my mother, and the men that they would surely have become. And in that moment, I think of my own sons.

My mother and I say goodbye to our personal tour guide with a hug and thanks. I still can’t quite read my mom. We take one last photograph, our backs to the sun.

Later, I think, I will talk to my boys about this visit. Later, I will explain.

Cati Porter is a writer, mother, and executive director of The Inlandia Institute, a literary nonprofit serving Inland Southern California. Her third poetry collection, "The Body at a Loss," is forthcoming from CavanKerry Press.