A struggle for identity amid the terror: Feeling like a "weird American" after 9/11

I'm a proud American citizen — but after 9/11, the war on terror I didn't support left me isolated 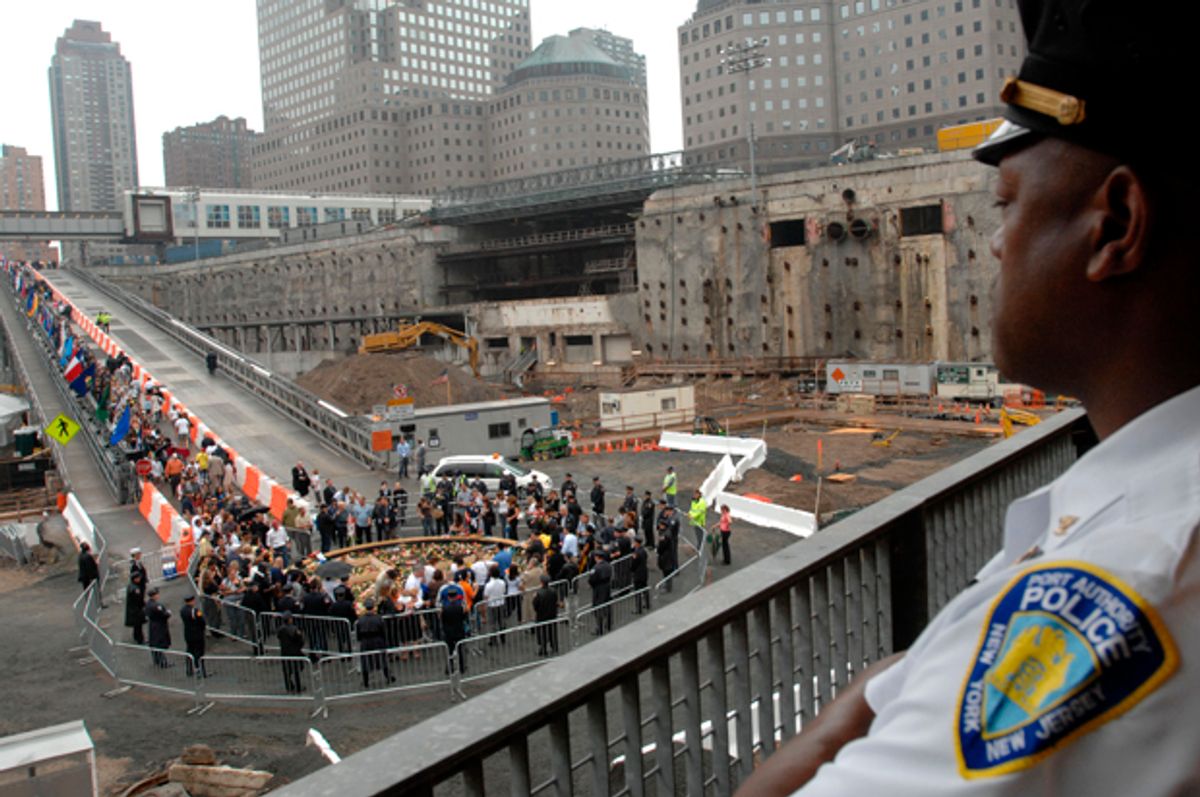 A Port Authority police officer watches the ceremony as victims' families walk down the ramp to place flowers in the reflecting pool during the ceremony on Sept. 11, 2007. (AP/Susan Watts)
--

On this anniversary of the 2001 terrorist attacks, I want to share why I think of myself as a weird American.

I’m very proud to be a citizen of the United States. America is a beacon of hope for democracy and freedom for millions of people across the globe. Our universities consistently produce ground-breaking research; our companies drive innovation for the global economy; our military helps keep peace in many global conflicts.

Yet I’ve always been uncomfortable thinking of myself as “American” when I see politicians make speeches with the message “America, Right or Wrong.” I much prefer the great American statesman Carl Shurz’s take, “My country, right or wrong; if right, to be kept right; and if wrong, to be set right.”

This feeling crystallized on the second anniversary of 9/11 in 2003. We had recently invaded Iraq based on the Bush administration claiming Iraq possessed weapons of mass destruction and also tying Saddam Hussein’s administration to the 9/11 attacks. Despite a thorough search, the CIA’s final report found no weapons of mass destruction, and the claims were later found to be false.

The lack of such weapons of mass destruction was already pretty clear by Sept. 11, 2013, and even Bush admitted no direct ties between Hussein and 9/11. Yet this didn’t prevent him from, in his speech on the second anniversary, making an association between 9/11 and the war in Iraq, when he stated “We are fighting that enemy in Iraq and Afghanistan today so that we do not meet him again on our own streets, in our own cities.”

I remember listening to that speech and being really turned off by his using the label “we” — Americans — as if it included me. I was not fighting the enemy and wanted no part of the label of “we” in a war I opposed. I remember taking a walk around my neighborhood after the speech and seeing all the flags out on the streets and feeling put off by such patriotic displays when I thought the country was going in a wrong direction. I recall remembering how the label of “American” felt confining, forcing me to identify with aspects of the United States that I was not happy about.

So I decided to spend some time thinking up a way to address this feeling of discomfort. I came up with an approach that draws on the strategy of reframing, a research-based approach involving changing our framework of thinking.

Specifically, I tried putting the term “weird” before “American.” The term “weird” had a wonderful impact. It fit my desire to identify overall with the label “American” but allowed me to separate myself from any aspects of the label I don’t support. This represents a specific instance of the broader, research-informed strategy of distancing oneself from an uncomfortable situation to think calmly about it and make good decisions about how to proceed forward.

Once I started thinking about myself as a “weird American,” I was freed myself from the anxiety of not fully identifying with that label. I was able to think through, calmly, which aspects of being American I identified with and which I did not and set the latter aside from my identity.

Based on that experience, I started putting “weird” in front of other labels that did not feel fully comfortable to me. For example, while I love my mother greatly, she and I fight occasionally, and it made me feel really bad in the past when we had conflicts. Now, I just think of myself as a weird son when we fight, which makes me much calmer and less stressed.

The term “weird” also enabled me to change my behaviors in useful ways. For example, I am intuitively a kind and gentle person and strive to be nice to everyone. However, being this way has enabled others to exploit my kindness and harm me in the past. Thinking of myself as a “weird nice guy” permits me to be less-than-nice when the occasion calls for it, however unnatural I may find that. Labeling myself as a weird pedestrian has permitted me to stop and smell flowers by the sidewalk despite getting strange looks from others.

Overall, using the term “weird” before any identity category helped me gain greater agency, the quality of living life intentionally to achieve my goals, by freeing me from restrictions associated with socially-imposed identity labels. It allowed me to pick and choose what aspects of these labels best serve my own needs and enable me to feel comfortable in my own skin. I hope some of you may resonate with being a “weird” American on 9/11 and use this strategy of identity management for your own benefit.