Get the flock out of here: Starlings are the worst. Birds. Ever.

Go on and hate starlings, who cause $900 million of damage a year, kill other species and destroy the ecosystem 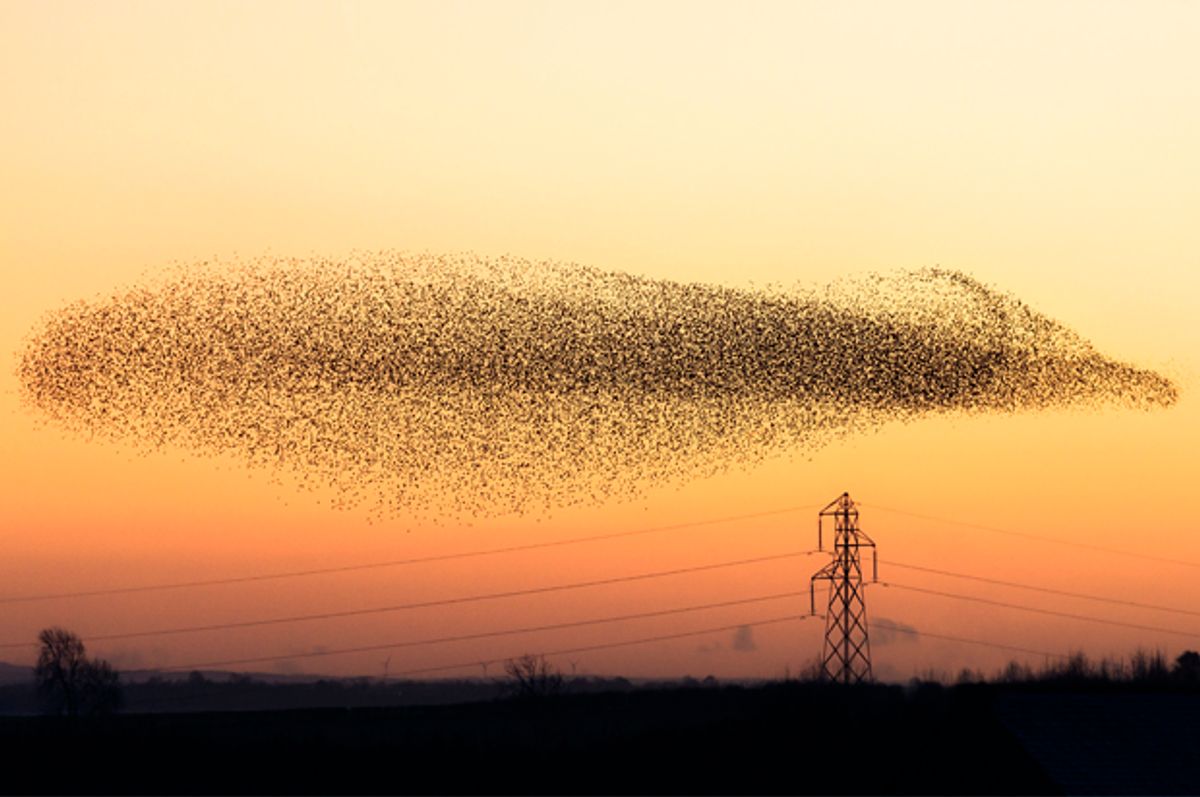 Conservationists would have you believe that protecting birds is vital to the ecological balance — and that humans who kill them are enemies of the environment. For the most part, they’re right. Raptors keep rodent populations from running amok. Songbirds prevent insect swarms of biblical proportion. And a recent report from the UN warns that our global food supply could be wiped out if we don’t immediately safeguard birds and other pollinators. But there’s one avian species, the iridescently-plumed European starling, that’s not supposed to be here in North America — and it’s waging guerilla warfare on our environment.

Today, starlings are viewed as the foulest of the fowls, but it wasn’t always this way. European immigrants assigned special significance to the birds of the bard, and Shakespeare lauded starlings — and their ability to mimic human speech — in  "Henry IV, Part 1." In 1890, inspired by these two sentences and with a little help from the American Acclimatization Society, German expat Eugene Schieffelin got his hands on 60 starlings and released them into Central Park. Unlike the other non-native bird species he released (wren, skylark, cormorant), the starlings did very well — there are now more than 220 million residing year-round in the US, in all 50 states. With fewer of their natural predators to keep numbers in check, they’re free to wreak havoc.

It’s estimated that these stocky blackbird-lookalikes cause $800 million worth of damage to America’s agricultural industry and foodstocks every year. They nest in farm equipment, creating fire hazards. They travel in large flocks 50,000 strong, pilfering vineyards for grapes and farms for fruit, vegetables, seeds and grain. They diminish supplies of livestock feed — 1,000 birds can put back 100 pounds of grain a day — or they contaminate them with their feces. And they transmit parasites and diseases, including E coli, from farm to farm.

“They’re a filthy bird,” Kurt Bunnell of Utah’s Bunnell Dairy Farm told Salon. The 60-cow operation encompasses 100 acres in Provo, a metropolitan area at the base of the Wasatch Mountains. “They eat our grain and and they crap in it. We’re a smaller farm by today’s standards, so this can make a big impact. We’ve hired a hobby trapper to catch them and feed them to his pet falcons.”

In major cities, the avian attacks are equally Hitchcock-esque — the starling’s acidic poop grows so thick on buildings, it’s been known to cause structural damage. And early this year, Rome experienced a starling poop deluge so fierce, cars were skidding off roads while people on sidewalks walked with umbrellas. It may be hard to fault nature for answering nature’s call, but merciless starlings also boot native birds — like pacifist-leaning woodpeckers — out of their nests, tossing their eggs onto the ground in sadistic fashion, because it’s easier than building their own.

It gets worse: because they have a deceptively high body density and fly in such large flocks, resulting in multiple strikes at once, starlings are one of the major offenders in airplane crashes. In 1960, the engines of an Eastern Airlines flight taking off from Boston’s Logan International Airport sucked up hundreds of passing starlings, while hundreds more hit the windshield, blinding the nearly-retired pilot. Just six seconds after lift-off, the plane was sinking into Winthrop Bay. Sixty-two people were killed. Today, birds cause $900 million in damage to the aviation industry yearly, and starlings — or “feathered bullets,” according to Bird Strike Committee USA — are among the top offenders.

Animal conflict experts are at a loss for solutions, largely because of the way these birds move, in awe-inspiring, shape-shifting cloud formations known as murmurations. Because we’re just beginning to understand the system of communication used within these groups — how do tens of thousands of creatures react to stimuli in unison? — it’s difficult for scientists to strategize a way for redirecting flocks away from vulnerable areas.

Still, starlings have their fans. According to one of birdwatching’s best-known luminaries, we shouldn’t even be trying to fix the problem.

“I personally like the starling,” Pete Dunne, founder of the World Series of Birding, author of a couple dozen birding books, and ambassador for the New Jersey Audubon Society, told Salon. “They’re very intelligent — my wife once saw one dig itself a foxhole and brush vegetation over top of itself, to avoid the falcon preying overhead. And I think it’s pretty poor form for a nation filled with European immigrants to look askance at another European immigrant.”

But for the most part, even the birding community — which has grown to be larger and more diverse than any time in history — is turning against the starling camp. Consider the essay written by Nicholas Lund, Senior Manager for the National Parks Conservation Association, and published by the National Audubon Society in March: “It’s Okay to Hate Starlings.”

So no one loves and everyone loathes starlings. The question is: What to do about them?

There is no easy answer. In response to the starling blight, the U.S. Department of Agriculture has engineered large-scale poisonings of the bird, which killed tens of thousands last year in Nevada alone. While effective, the practice has raised the hackles of animal rights’ activists, who say the Starlicide pesticide can take up to three excruciating days to kill a bird and is, therefore, inhumane. And there is collateral damage. Unintended casualties include the rusty blackbird, whose population is on the decline. There are also concerns about the pesticide, toxic to humans, seeping into groundwater.

Other methods for slowing the spread of starlings have thus far been rudimentary: hunting the birds and cooking them into meat pie, which the federal government encouraged in the 1930s (despite the Great Depression, the delicacy never caught on). Or installing netting over feedlots, something difficult to finagle for larger farms. Or employing a sonic unit to play mock predator calls, which only worked until starlings wised up. Or, in one particularly desperate effort in Washington, D.C., exposing the birds to itching powder.

But there may be another way. Last month, new rules from the Federal Aviation Authority went into effect, eliminating the time-consuming waiver-application process for commercial drone users. Some experts say this might inspire solutions from a new crop of agriculturally minded entrepreneurs.

“I sure as heck would be thinking about a drone to manage these flocks — using it to disrupt a murmuration by shooting out fireworks or something like this,” Kevin McGowan, PhD, researcher with the Cornell Lab of Ornithology, told Salon.

Developers have already introduced the Bionic Bird, a drone you operate with your smartphone and is meant to fly alongside birds without frightening them, but will likely incorporate mock predator calls in the near future. The autonomous ProHawk UAV, made to look like a predator hawk and released this year as the first drone specifically for bird management, already does this. And the researchers behind an eight-armed octocopter built for studying starling flight in 2014 at Rutgers University have a plan in mind they hope to enact within the next year.

“It started as a daydream,” William Saidel, associate professor of biology at Rutgers, told Salon. “We started thinking: We’ll have the mothership drone, and that will have 40 to 50 four-inch drones attached to it. The idea is for them to release into a flock to disrupt it.”

Others aren’t convinced drones will be a lasting solution. “A bunch of noisy, strange machines would not, in my opinion, scare off starlings for a durable period of time,” Hungarian physicist Tamas Vicsek told Salon. “They would soon realize that ugly, slow, hard-to-turn drones cannot harm them.”

It’s a problem that won’t be resolved anytime soon.

“Biology is not rocket science. . . . it’s much harder than that,” McGowan said. “This isn’t like a hurricane — it’s not one big thing you can see coming. It’s a little bit here and a little bit there, and there’s a thousand places for the sand to fall out of the bag. We don’t want to wage war and eliminate birds altogether, like they did in China, because that’s going to lead to a lot more problems. So there’s no simple fix.”