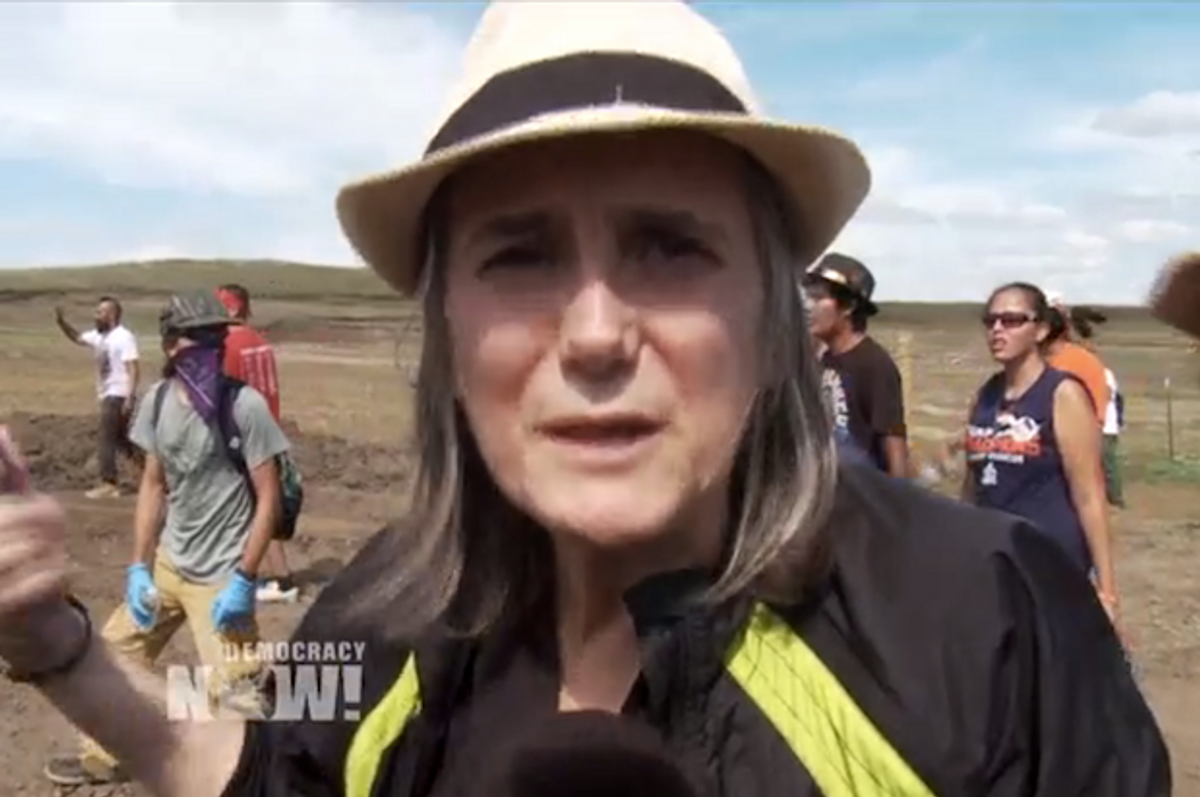 North Dakota authorities have issued an arrest warrant for the prominent radio and TV journalist Amy Goodman, in response to her coverage of protests at the construction site for a massive oil pipeline.

Morton County issued the arrest warrant on Sept. 8. Goodman, the host of the popular independent news program Democracy Now, was charged with criminal trespass, a misdemeanor.

An activist told Goodman that one of the attack dogs bit another protester in the face. Democracy Now captured video of the dog with blood in its mouth and nose.

Democracy Now's report got tens of thousands of shares on social media. The footage it captured was also reused by CBS, NBC, NPR, CNN, MSNBC and the Huffington Post.

The arrest warrant for Goodman was issued just a day after Morton County issued arrest warrants for Green Party presidential candidate Jill Stein and her running-mate Ajamu Baraka. Both were charged with two misdemeanors for participating in the protests.

Stein and Baraka mentioned the attack dogs and pepper spray in their responses to the news of their charges. “I hope the North Dakota authorities press charges against the real vandalism taking place at the Standing Rock Sioux reservation: the bulldozing of sacred burial sites and the unleashing of vicious attack dogs,” Stein said.

For weeks, activists from around the country have joined demonstrations against the North Dakota oil pipeline in solidarity with indigenous Americans, many of whom are from the Standing Rock Sioux tribe.

The Dakota Access pipeline will span at least 1,168 miles from North Dakota to Illinois. It is a $3.7 billion project of the company Energy Transfer Partners.

Local Native American residents warn the enormous oil pipeline will pollute their water and land. In a lawsuit, the Standing Rock Sioux tribe also said the developer “desecrated and destroyed” some of its “historically, culturally and religiously important” sites.

A federal court ruled against the tribe on Friday, allowing the pipeline construction to continue. In an unexpected announcement immediately after the ruling, however, federal authorities called on Energy Transfer Partners to halt construction temporarily near Lake Oahe, an area that has recently seen heavy protests.

The Department of Justice, the Army and the Department of the Interior are reviewing whether the pipeline construction violates environmental laws or other federal laws. Activists celebrated the delay as a victory, although they are concerned that the government could later authorize the company to continue construction.

A demonstration will be held outside the White House on Tuesday, Sept. 13 to pressure the Obama administration to permanently halt construction on the oil pipeline. The rally will feature Sen. Bernie Sanders, Van Jones and several Native American activists.

Other protesters have been charged, in addition to Goodman and the Green Party candidates. Cody Hall, a lead organizer of the pipeline protests, was arrested at a checkpoint that North Dakota authorities created to prevent protesters from visiting the Standing Rock Sioux reservation and joining the protests. Hall was jailed and denied bail. After speaking with his attorneys, Democracy Now noted that "it is highly unusual for a defendant charged with misdemeanor trespass to be jailed and denied bail."

In response to Goodman's misdemeanor charge, Democracy Now said it is consulting with North Dakota attorneys. It is also working with the Center for Constitutional Rights.

"This is clearly a violation of the First Amendment," said Baher Azmy, CCR's legal director. Goodman's arrest, Azmy said, was "an attempt to repress this important political movement by silencing media coverage."