Health hysteria and hypocrisy: Here's a news alert — Republicans have taken ill, too

Time to stop the smears: Hillary isn't the only high-profile politician who has become sick or had health episodes 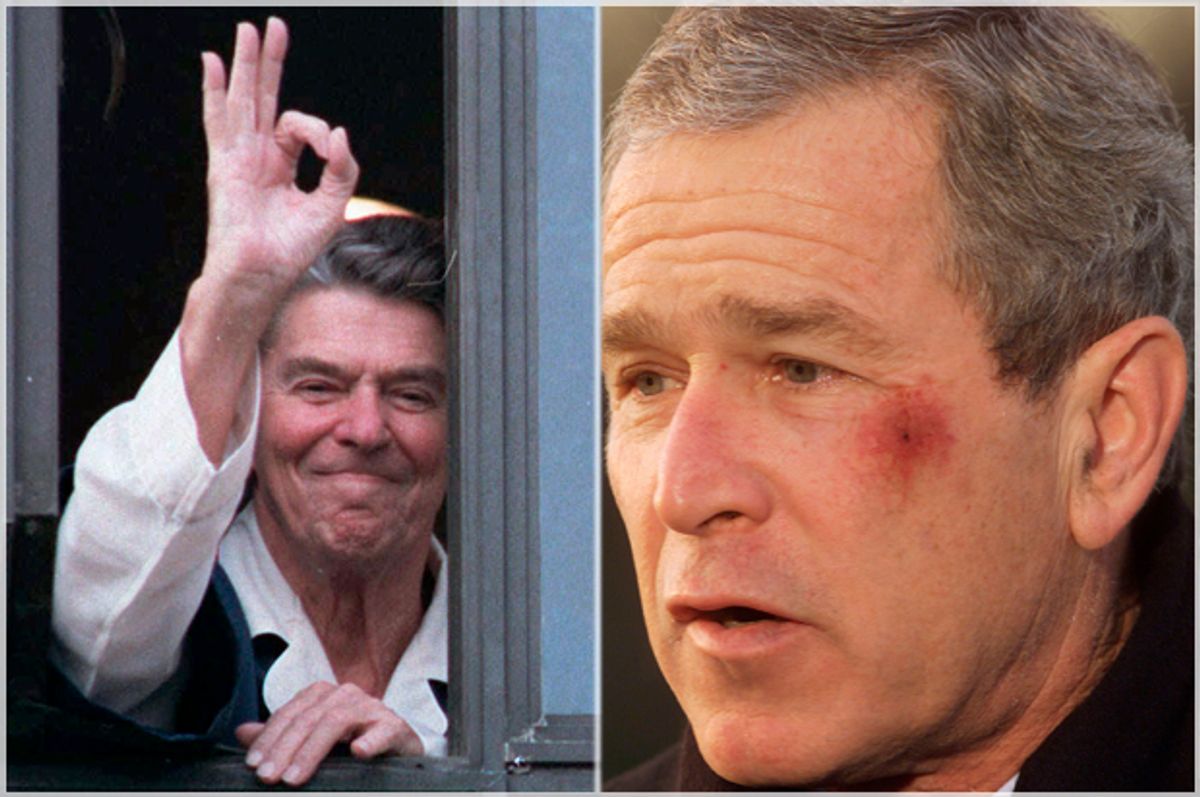 Ronald Reagan waves from the window of his hospital room in Bethesda, Md., July 18, 1985; George W. Bush talks with reporters about fainting briefly after choking on a pretzel, Jan.14, 2002. (AP/Ron Edmonds)
--

After 24 hours of fulminating over Friday night's commentary from Hillary Clinton about "baskets of deplorables" and Donald Trump's stated willingness to start a war if someone flips an American the bird, everyone seemed more than ready for a day of national unity to commemorate 9/11. Then Clinton had a fainting spell and all hell broke loose.

The press went into full-blown breaking-news mode and when tape emerged of Clinton wobbling and appearing to faint as she got into her car, the cable networks and journalists on social media went with wall to wall with breathless medical speculation. They showed the video in slow motion over and over again like it was an outtake from the Zapruder film scene in Oliver Stone's "JFK" ("back and to the left, back and to the left.")

She emerged from her daughter's home smiling and waving a few hours later (prompting hilarious right-wing conspiracy theories that it must have been a body double.) But when her doctor released a statement saying she had been diagnosed with pneumonia on Friday, the press became hysterical.

At that moment media outlets could have chosen to analyze Clinton's pressing on with the campaign in spite of having pneumonia as an indication of her grit and dedication to the campaign. And in fairness some did. For instance, contrary to the widely assumed rumor that she'd been taking it easy all month, Jeff Zeleny of CNN said that he'd covered five presidential campaign and never seen a more brutal schedule than Clinton's.

Or the media organizations could have taken Clinton's doctor at her word that she is being treated and will recover nicely. Instead, they settled on their tedious narrative of righteous indignation about Clinton's supposed pathological secretiveness in failing to inform them of her diagnosis the minute she received it. It's all about them.

They also know very well that this febrile coverage plays into an ongoing theme of the presidential campaign: Donald Trump's claim that Hillary Clinton doesn't have "the strength or the stamina" to be president. On one level, it's a simple sexist charge against a woman candidate from a man who believes that all of life is a game of primitive dominance. But it's more than that. Trump made the same charge against Jeb Bush during the primaries; in that case it was the taunt of a schoolyard bully.

And there has been yet another layer to Trump's "strength and stamina" charge in recent weeks, leveled first by surrogates like Alex Jones, Breitbart News and Matt Drudge and taken up recently by the campaign itself, which has implied that Clinton was suffering from brain damage and possibly Parkinson's disease. I wrote about this elaborate conspiracy theory a couple of weeks ago.

Despite the fact that this is a right-wing smear, "the health issue" has worked its way into the mainstream press, leading to coverage of a couple of coughing fits as if they were obvious signs that she's on death's door and current events as if they show something is seriously wrong. (How pneumonia relates to brain damage has yet to be explained.)

But the truth is that coughs and throat problems are probably the most common problem a politician has. And when one personally hugs, shakes hands and gets breathed on by thousands of people in a week, getting pneumonia isn't really all that surprising either. It's obvious that if the Drudge smear wasn't in full bloom, this story would have been covered differently. Instead, unable to resist the lure of the sexy tabloid lede, Politico just let it all hang out: Clinton scare shakes up the race Physical weakness caught on camera turns health conspiracy into a legitimate campaign concern.

The fact is that politicians get sick. Indeed,  presidents get sick. George W. Bush fainted in the White House just sitting on a couch eating pretzels. His father famously caught the flu while traveling, grew faint and vomited on the prime minister of Japan's lap.

President Ronald Reagan was shot and had cancerous polyps removed from his colon while in office. Lyndon Johnson had gall bladder surgery while holding the top office in the land and proudly showed his scar to the press corps. President Dwight Eisenhower had a heart attack and emergency surgery for a bowel obstruction. There's no need to reiterate all of President Franklin Roosevelt's health problems, but it's pretty clear that the right wing and the press today would find him unfit for office.

And the list of macho men who have fainted in public is a lot longer than you might think. This is just a sample:

Attorney General Michael Mukasy fainting in the middle of a speech in 2008.

Silvio Berlosconi, Italy's prime minister at the time, collapsing in 2006.

Bill Daley passing out at his commerce secretary appointment ceremony in 1996.

A 23-year-old soccer player collapsing during a live interview.

A soldier fainting, waiting for dignitaries to arrive.

To put it simply, if you discard the inane right-wing conspiracy theories about Clinton's alleged brain damage and Parkinson's disease, you'll realize that ailments like coughing, fainting, pneumonia, flu, etc., are common among politicians and other leaders because they're common among humans.

Despite some truly ridiculous speculation from members of the press, this is unlikely to be more than a slight blip on the campaign. It's pneumonia not a brain tumor and she will recover. But it's almost sure that the drumbeat for her to release her full medical records for the press to paw through for juicy tidbits is going to become louder and she'll undoubtedly end up complying. Medical privacy is not allowed for presidential candidates.

Well, unless they are named Donald Trump. While everyone is breathlessly speculating about what Clinton is hiding in her records, you'd think the press would be equally curious about why a 70-year-old billionaire's doctor is a cartoon character who wrote the most ridiculous letter attesting to a presidential candidate's fitness in American history. Does he not have a real doctor? Will the hysteria this past weekend force the media to ask that question at long last? It's actually much more suspicious than Clinton's mundane fainting spell and bout with pneumonia.