Fascinating world views from the International Hairdressing Show in Paris to the streets of Santiago, Chile 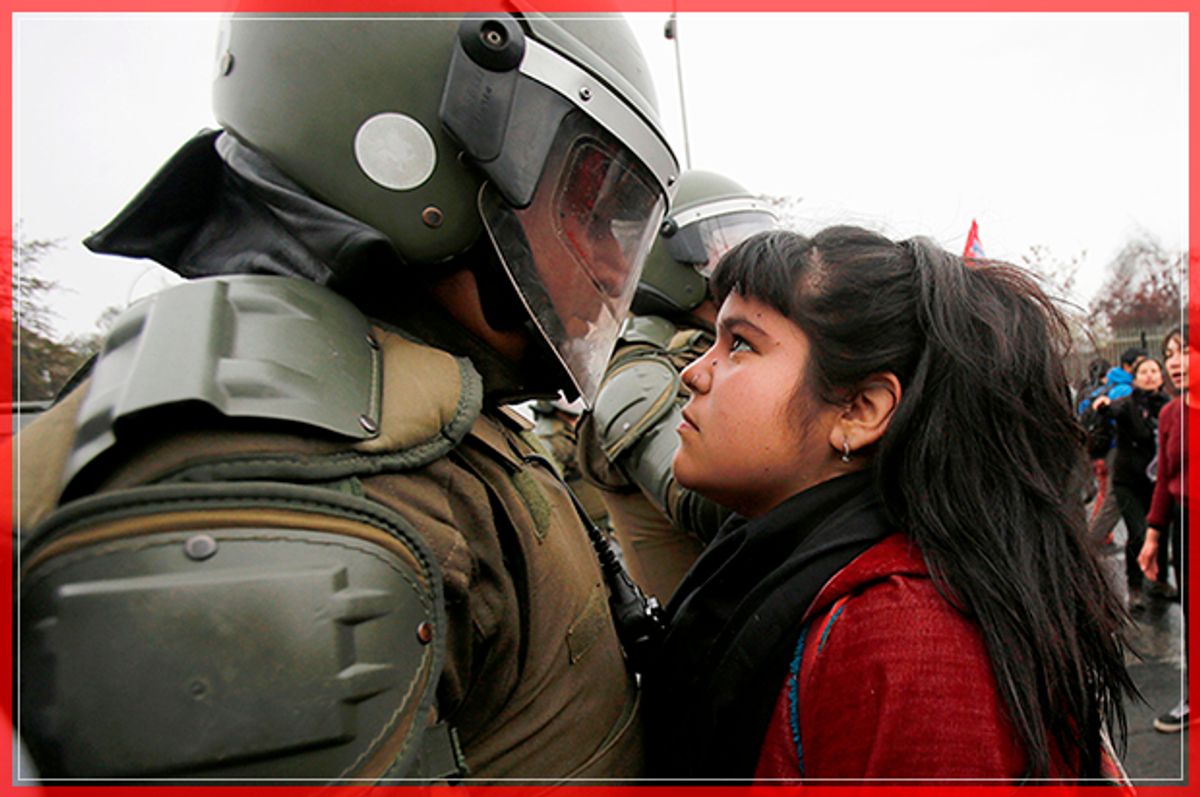 A demonstrator looks at a riot policeman during a protest marking the country's 1973 military coup in Santiago, Chile September 11, 2016. REUTERS/Carlos Vera FOR EDITORIAL USE ONLY. NO RESALES. NO ARCHIVE. TPX IMAGES OF THE DAY - RTSN9Z3 (Reuters)
--

Washington, DC   Chip Somodevilla/Getty
A truck with a digital billboard parks in front of the newly opened Trump International Hotel I appreciate the relentlessly juvenile character of this Trump protest. As a writer, I struggle with the Donald Trump presidential candidacy and the urge to respond in kind to its debasement of political and media culture (I also admit to having succumbed to this urge on several occasions). But one is forced to make choices when protesting Trump and his new hotel at the Old Post Office building in Washington, DC. You could point out the many lawsuits circling the project and the fact that the anti-immigrant candidate employed undocumented construction workers to finish the project. Alternately, you could render Trump's face as a butt in the style of the iconic Obama "Hope" poster and have him fart an expletive. These protesters have opted for the latter, and I can't bring myself to fault them. This week, Muslims all over the world are celebrating Eid al-Adha, the Feast of the Sacrifice. In this photo, we see a Palestinian man tossing a young boy into the air outside of the Dome of the Rock in the Al-Aqsa mosque compound, located in Jerusalem's Old City. How weightless the boy appears in this photo — he looks as light as a feather. How exhilarating that feeling is of flying through the air. And the man's face trained on the boy, concentrating on the literal and figurative gravity of this act. It's a kinetic reminder of the joy and the terror of surrendering to faith of any kind, and what it feels like to know that your fate isn't necessarily in your own hands. Santiago, Chile   Carlos Vera/Reuters
A demonstrator looks at a riot policeman during a protest marking the country's 1973 military coup It's easy to dismiss the humanity of the opposition, to view those on the other side of the most strongly felt issues as a faceless entity. But in this moment in which a protestor and policeman lock eyes, their antagonism may be evident, but their purposeful determination to truly see and been seen by each other is as well.