Trump, Iraq and Max Cleland: The right's endless hypocrisy over the war

Max Cleland was destroyed by GOPers for opposing the Iraq War, yet they're fine with Trump's (current) opposition 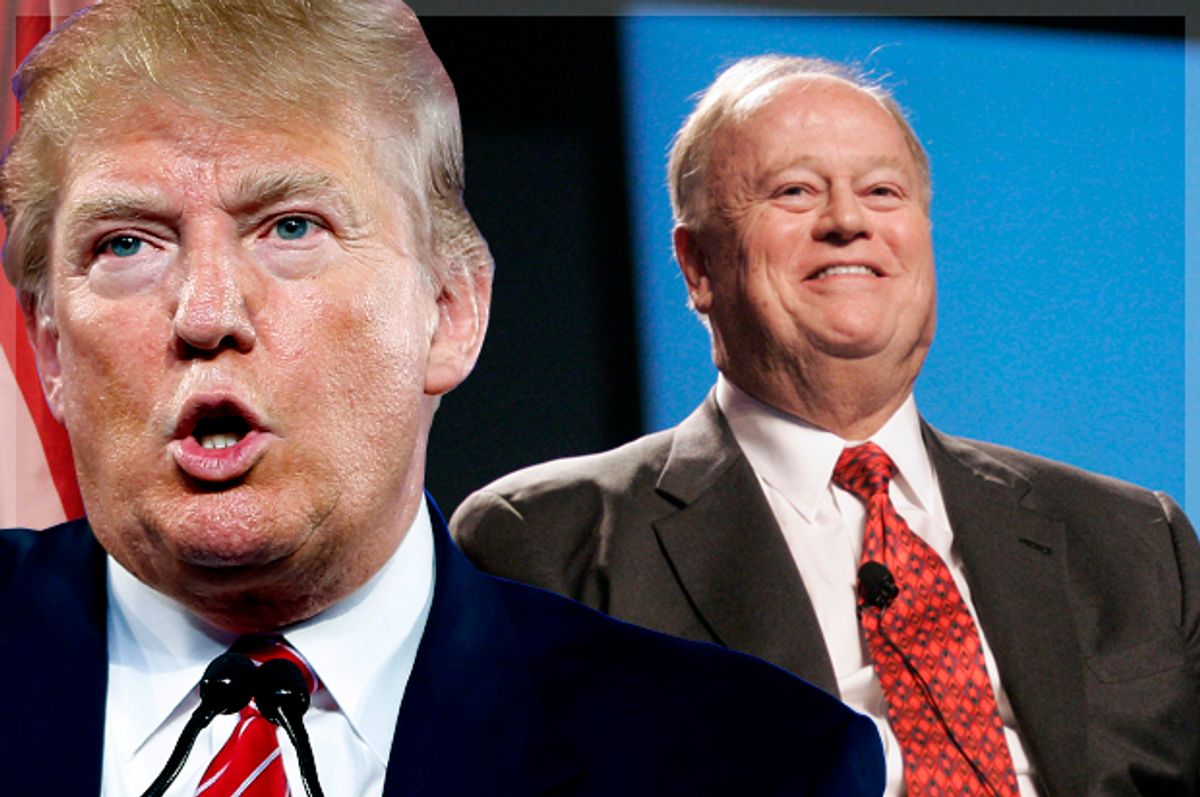 While stepping off a helicopter on Hill 471 during the battle of Khe Sanh, 25-year-old Army Captain Max Cleland spotted an unexploded M-26 grenade on the ground and, believing it to be one of his own, grabbed it just in time for the grenade to detonate. The devastating blast annihilated Cleland's forearm and both of his legs.

It was April 4, 1968, the same day on which Martin Luther King Jr. was assassinated.

Military doctors later amputated what remained of Cleland's limbs, leaving him with one functioning arm, a one-way ticket out of the Vietnam War and a lifetime confined to a wheelchair in exchange for his dedication to serving his nation. Cleland emerged from the war with multiple decorations, including the Bronze and Silver Stars and in 1971 he began a decades-long career in public service, beginning with his serving in the Georgia state Senate then as secretary of state of Georgia and administrator of Veterans Affairs. And in 1996, Cleland was elected to the U.S. Senate.

By rights, a war hero like Cleland could have held his Senate post for multiple terms, even while representing a red state despite his being a member of the Democratic Party. But his career in Congress was fanatically roadblocked in 2002 by the Bush administration — specifically by Karl Rove and the Republican challenger for Cleland's seat, Saxby Chambliss. Those of you old enough to remember will likely recall the 2002 midterm election and how nearly every Democrat running for or holding office was, at that moment in time, an endangered species given the knee-jerk patriotism of post-9/11 America and the GOP's branding of everything red, white and blue.

Like many Democrats in 2002, Cleland opposed the Bush administration's plans for an invasion of Iraq in response to the 9/11 attacks a year earlier. For his opposition to President Bush's military whimsy, Cleland was targeted for ouster by Rove and the Chambliss campaign, and the strategy was breathtakingly horrendous. The centerpiece of the campaign was an infamous television ad in support of Chambliss, which inconceivably linked Cleland with Saddam Hussein and Osama Bin Laden, the dual supervillains of that era, while also outrageously questioning whether Cleland had "the courage to lead."

Prior to the ad's dropping, Cleland was comfortably ahead of his challenger in the polls. In the days and weeks following the ad, Cleland dipped behind Chambliss and was ultimately defeated by a 6-point margin. He later told CBS News that the election had triggered his PTSD from the war. Chambliss went on to serve two full terms, retiring after the 2014 midterms.

Cleland, who left three limbs in Vietnam, was politically euthanized by the Republicans using a familiar early-2000s cudgel: Cleland was an unpatriotic terrorist sympathizer for his opposition to what became the Iraq War and therefore this decorated American soldier was unfit to serve in the Senate. He was publicly disgraced by the GOP establishment, as well as by an opponent, Chambliss, who received a deferment from the Vietnam draft due to an alleged "bum knee" from an old football injury. In other words, the draft dodger Republican was a true patriot for supporting the war, but a triple amputee and Vietnam War hero wasn't patriotic or courageous enough for re-election. Worse, Cleland was named as part of a rogues gallery that included America's most visible enemies at the time.

The party that engaged in a nationwide lynching of anyone and everyone who opposed the Iraq War, including, by the way, anti-war celebrity liberals like Bill Maher, Michael Moore and the Dixie Chicks, has nominated Donald Trump. Apart from being an extreme dilettante and an unstable nuclear weapons fetishist, Trump has been vocal throughout his 15-month campaign that the Iraq War was "the worst decision ever made in the history of our country." That's a direct quote, by the way.

Trump also said recently, "All of the problems that we have now stem from going into Iraq." During a CNN town hall in February, Trump reiterated, "It started ISIS. It started Libya. It started Syria. Everything that’s happening started with us stupidly going into the war in Iraq."

While participating in last week's MSNBC Commander-in-Chief Forum, Trump once again insisted that he "was totally against the war in Iraq," as he's been saying for many months, "And I was against the war in Iraq because I said it’s going to totally destabilize the Middle East, which it has. It has absolutely been a disastrous war." Indeed, Trump has been tripping over himself in an attempt to deflect allegations that he actually supported the war.

Whether he supported or opposed it at the time of the run-up is kind of irrelevant today. (He's been quoted as having supported the war, which he currently denies.)

What's mind-blowingly disturbing is that the GOP establishment is currently rallying around a presidential nominee who can't denounce loudly enough the Iraq War, including the president who led us into it, as well as anyone who links Trump to quotes in which he contemporaneously endorsed the war.

Today Republicans are rallying around Trump, even though it's fair to assume that legions of the same loud-mouthed alt-right rednecks who support Trump today were also the same yokels who burned Dixie Chicks CDs in 2003 and who festooned their cars with patriotic swag and "These Colors Don't Run" bumper stickers. The same voters who cheer for Trump when he pillories the war were likely the same voters who tarred and feathered real patriots like Cleland for opposing the war before it devolved into the stupid disaster that Trump speaks of today.

Since the 2008 primaries and throughout the 2016 campaign, voters and the press alike have held Hillary Clinton accountable for her 2002 vote for the authorization for use of military force in Iraq, Congress' legislative blank check for the Bush administration to either invade or not. Clinton has repeatedly confessed that her vote was a mistake, most recently on NBC last week, despite the nuanced reasons why she once supported the authorization. Indeed, Clinton is one of few politicians from the 2002-2003 era to have apologized for her vote.

Likewise, the Republican Party of 2016 — the party that's actively infected the world with the Trump virus — must apologize for the Iraq War and especially to patriots like Max Cleland, who bravely opposed it when it was dangerously unpopular to do so. Party leadership and voters alike have an obligation to apologize for nominating a man who’s saying the same things about Iraq which Cleland and others predicted in 2002. The GOP has to apologize for its "you're with us or you're with the terrorists" plot to blacklist alleged dissidents prior to and during the war, especially given how the GOP nominee’s rhetorical posture includes running away from the war using the most emphatic language possible, now that it's safe and easy to do so.

But don’t hold your breath.