Trump’s no Einstein: But his ignorant, illiterate answers to the campaign science quiz reflect a non-stupid strategy

Trump says there's no climate change, and no money to fix it -- but his non-answers aren't as dumb as they seem 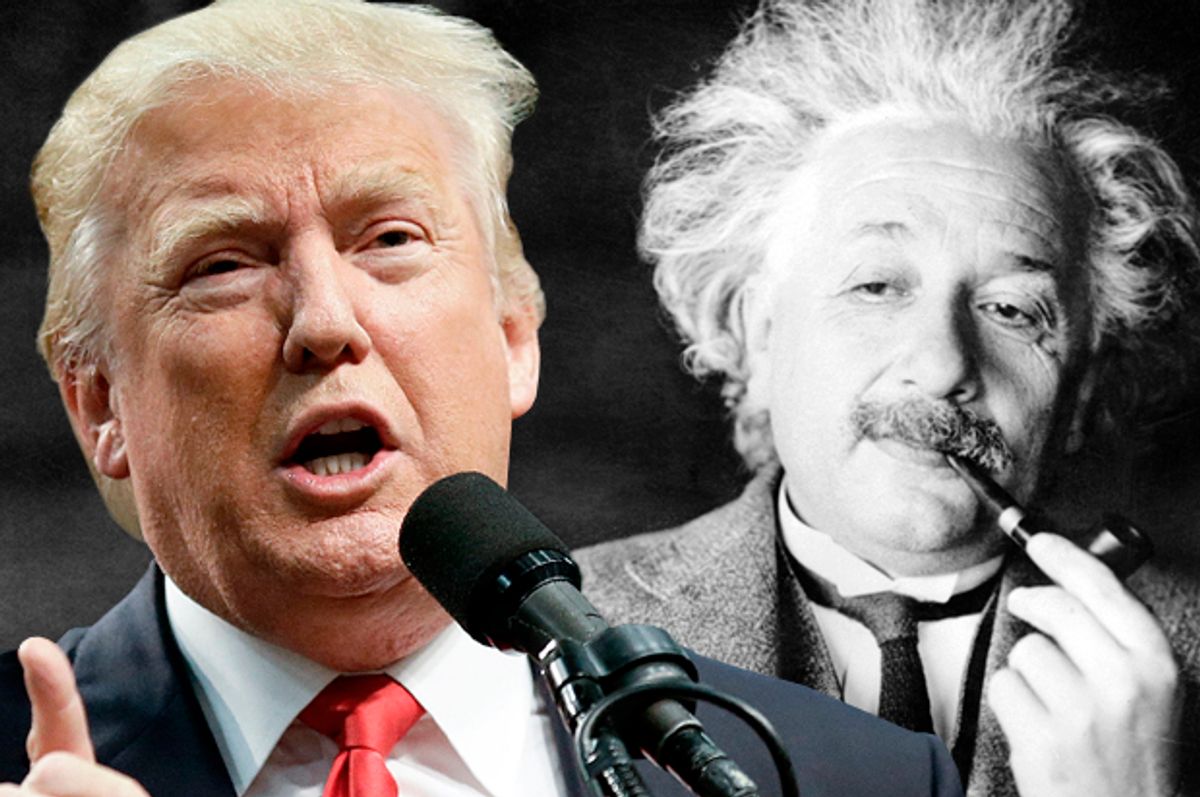 Both major-party presidential candidates responded to a question about the health of the world’s oceans posed by ScienceDebate.org, a nonprofit advocacy group supported by dozens of nonpartisan science and engineering institutions, from Duke University to the National Academy of Sciences to the American Society of Ichthyologists and Herpetologists. That was the 18th of 20 questions on the group's quadrennial quiz for prospective presidents, whose results were released on Tuesday morning. (Jill Stein of the Green Party also responded to the questionnaire, frequently invoking the phrase “Medicaid for all.” Libertarian nominee Gary Johnson, perhaps still working on his Syrian geography, did not.)

The ocean question began by citing scientific estimates that 90 percent of fishery stocks are being depleted beyond sustainable limits and many coral reefs, coastlines and other oceanic habitats are threatened by pollution. Hillary Clinton’s response was five paragraphs long, cited statistical evidence and relevant legislation, and concluded with a pledge to “continue leading the global fight against climate change.” One might question whether the United States has actually done that, but never mind. Here is Donald Trump’s response, in full:

My administration will work with Congress to establish priorities for our government and how we will allocate our limited fiscal resources. This approach will assure that the people’s voices will be heard on this topic and others.

So: No mention of climate change, which isn’t exactly shocking. Also no mention of the word “oceans,” the word “pollution” or any of the issues actually raised by the question. I suppose that’s a more diplomatic response than saying, “I don’t give a damn about the oceans and we’re not spending a freakin’ nickel on this issue unless it somehow becomes a political liability,” but not by much.

One has to wonder why Trump even bothered — or rather, why whichever campaign apparatchik actually wrote that bothered. But that non-answer perfectly epitomizes the Trump campaign’s response to ScienceDebate’s pop quiz: Ignore the question or change the subject, defer to “free markets” and popular opinion rather than taking a position, and whenever possible do not repeat the words and phrases used in the question. That latter tactic feels like some kind of tribal right-wing superstition: If you speak the language of the so-called scientists, you give them power. Who says the oceans are dying, anyway? I had a tuna sandwich yesterday!

Come to think of it, maybe Trump did write his answers, since those are exactly the same rhetorical methods he employs when being interviewed. Furthermore, the sheer illiteracy of the prose — I don’t mean scientific illiteracy, which goes without saying, but actual readin’-and-writin’ illiteracy — suggests genuine Trumpian authorship, or at least overlordship. Nuclear energy is described as “part of an all-the-above program [sic] for providing power for America long into the future … its outputs are extraordinary given the investment we should make.” His answer to a question about providing clean water contains this baffling sentence: “We must explore all options to include making desalinization more affordable and working to build the distribution infrastructure to bring this scarce resource to where it is needed for our citizens and those who produce the food of the world.”

As with so many things about the orange-skinned Republican nominee, his refusal to engage seriously with almost any question about the role of science in society presents a dazzling combination of idiocy and brilliance. Paired with Clinton’s lengthy and detailed policy-wonk responses — whoa, check out the nerd! — Trump’s shrug-then-punt answers create a reality-distortion field that is likely to depress the intelligence of everyone who encounters them.

“Science is science and facts are facts,” Trump assures us in his answer to the final question, which is about protecting the integrity of the scientific process from political interference. Even by the elevated standard of Ridiculous Stuff Donald Trump Says, that one’s a howler. His entire campaign has been devoted to the proposition that there are no facts, only impressions or emotions: “Illegal” immigrants are flooding across the border and taking our jobs; crime in our cities is out of control; Islamic terrorism is a massive danger to Americans. If we were to go by facts, we might learn that undocumented immigration has declined so much it may actually have reversed itself, violent crime remains at or near historic lows and many more Americans are electrocuted by household appliances than are killed by radical Muslims.

Sometimes in Trump rhetoric the fatwa against repeating scientifically-loaded words and phrases can be honored by violating it. When climate change comes up directly in question 3, Clinton responds with a bullet-point list promising to produce half the nation’s electricity from clean sources and reduce oil consumption by a third. The Lizard Man is ready, with scare quotes: “There is still much that needs to be investigated in the field of ‘climate change,’” he writes. What a burn! Then he pivoting to the position that maybe the whole idea is a tiresome waste of time. “Perhaps the best use of our limited financial resources should be in dealing with making sure that every person in the world has clean water” — not an idea mentioned in his response to the water question, mind you. Maybe we should cure malaria or increase food production! (Grandiose proposals also not mentioned elsewhere.) Anything you want, as long as we don’t talk about that subject anymore.

Even more than the standard Republican claim that the market will fix everything — “a thriving market system will allow consumers to determine the best sources of energy” — and standard Trumpian claims that he is a servant and/or embodiment of the popular will, Trump’s go-to answer is “Dude, we don’t have the money.” Should we invest in science and engineering? Well, maybe, but there are “increasing demands to curtail spending and to balance the federal budget.” Mental health care? Sure, but deal with that "at the local level.” A question about funding public-health campaigns to fight emerging diseases and “antibiotic-resistant superbugs” really gets his dander up:

The implication of the question is that one must provide more resources to research and public health enterprises to make sure we stay ahead of potential health risks. In a time of limited resources, one must ensure that the nation is getting the greatest bang for the buck. We cannot simply throw money at these institutions and assume that the nation will be well served. What we ought to focus on is assessing where we need to be as a nation and then applying resources to those areas where we need the most work.

I’m not quite sure how to interpret that last sentence, but it might be like this: These “superbugs” you speak of, where are they? I’ve never seen them! How can you ask me to spend money on something I can’t see?

One could go on. My point is not merely that Trump is a blithe moron who doesn’t believe in facts or science or research or any sort of objective reality, and who shamelessly panders to his audience’s desire to hear that all federal programs that might potentially aid black people or Mexican immigrants have been slashed. (He does like the space program, which is extremely expensive but has always had Republican-dad appeal.) In fact, that isn’t my point at all.

Trump’s ignorance and denial and topic-avoidance are a strategy in themselves, consciously or otherwise. He may be a stupid person, but that's not necessarily a stupid strategy. People who believe in science and are likely to read the entire quiz attentively aren’t voting for him anyway. When Trump supporters read journalistic accounts of his stonewalling non-answers, they can chortle along and exchange virtual high-fives, because his dismissive tone, total lack of curiosity and one-size-fits-all rhetoric appears as strength, from their closed and fearful view of the world.

Hillary Clinton goes on and on about STEM programs and the UNFCCC and the National Parks Trust Fund and the Beginning Farmer and Rancher Development program, and what she says is largely reasonable and way too detailed and frankly kind of boring. Trump’s response is simpler and clearer and for that reason dangerous: Whatever the hell you're talking about, Poindexter, we don't have the money. Instead, we have “a vision for a greater, better America,” and since that's imaginary it's also free.