John Kerry's last hurrah: With the Syrian cease-fire, the secretary of state takes a parting swipe at Russophobia

The cease-fire ends his successful skirmish with the Pentagon, but the war will grind on long after Kerry is gone 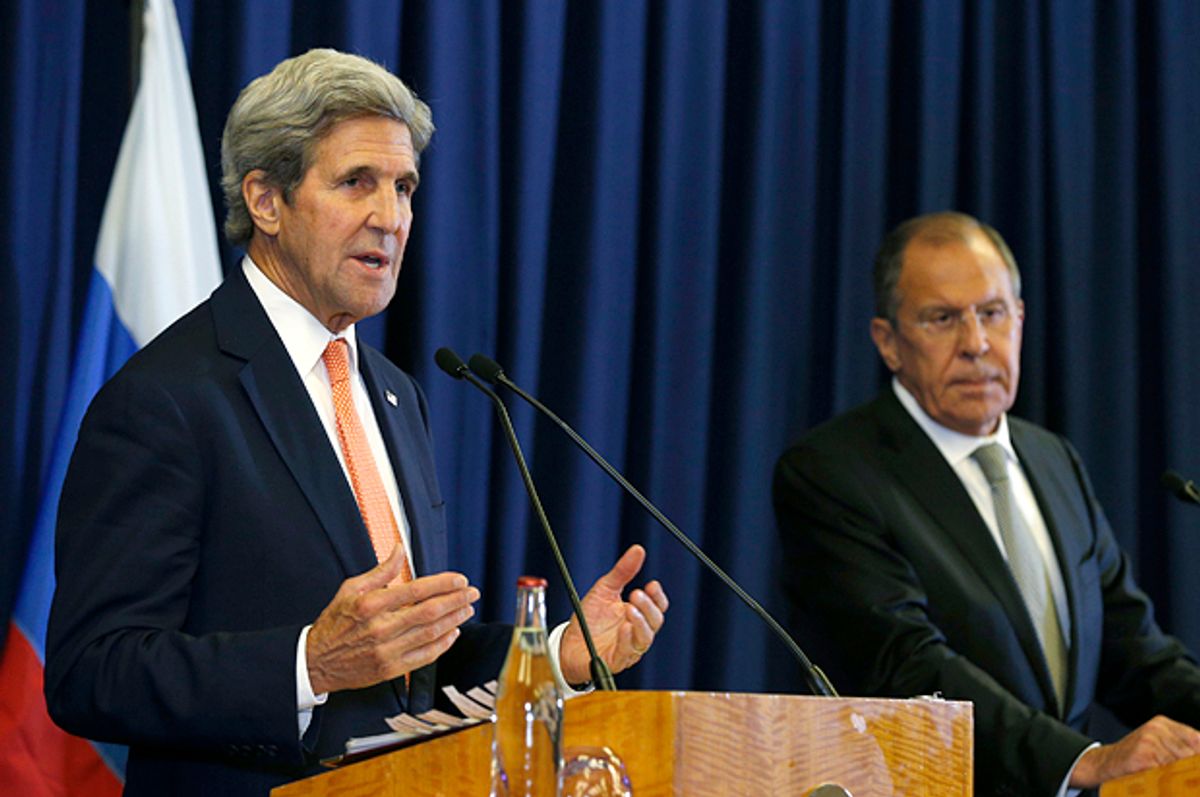 Secretary of State John Kerry now gives us another “cessation of hostilities” agreement — a not-quite-cease-fire — as signed with Sergei Lavrov, his Russian counterpart, in the wee hours of last Saturday in Geneva. It is intended to halt the violence in Syria for a solid week, during which aid and relief agencies are to have safe passage to besieged towns and cities. If that goes according to plan, the American and Russian militaries are to coordinate air campaigns against the Islamic State and — in the best possible outcome — Syrians will finally set out on the path to a political settlement.

We will see. This is all one can say at the moment.

It is Kerry’s second such deal with Lavrov, a highly capable diplomat with whom the secretary has a close and respectful working relationship. And it is the ninth attempt — but who’s counting? — to resolve the crisis since the Arab League took two shots at it in late 2011. None of these has come to anything.

There are plenty of reasons to question whether this latest undertaking will get any further than the others, and we will get to those. There are more and better reasons to support the Kerry-Lavrov agreement, whatever its chances of survival. Setting aside — without diminishing — its worth on humane grounds alone, this accord brings us to a significant moment in post-Cold War American foreign policy. We must not miss this.

It has been clear for some years that the policy cliques in Washington have been approaching a decisive limit. It is not merely that the Bush II framework — flouting international law, intervening at will, “pre-emptive” war, “regime change,” “nation-building” and so on — can be carried no further. There is a larger point. Bush II strategy and tactics were never more than a radical version of policies pioneered decades ago by Woodrow Wilson — neo-neo-Wilsonianism, we can call it. And it is the Wilsonian tradition altogether, grounded in American claims to exceptionalism and universalism, that gradually passes into history as we watch and speak.

One can hardly be more pleased. Given that Washington’s cliques display no capacity to self-correct, American foreign policy must fail and fail again before we have any chance of reshaping it into a constructive alternative. As I have said many times in this space, look for the optimism buried in the apparent pessimism.

Two events have brought this point squarely home since this column began three years and some ago.

One is Ukraine, where, by gross miscalculation, Washington cultivated a coup that has precipitated precisely the monumental mess that George Kennan, Henry Kissinger, Stephen F. Cohen and numerous others warned such unlawful tampering would. The other is Syria, where the U.S. has similarly sought to depose a leader and install a client. The lesson in both cases is simply stated: “Uh-uh, not here and not anymore.” That Russia has taught it in both cases is no small reason the policy cliques and their clerks in the press now cast President Putin as our new Beelzebub.

Now consider Kerry’s position in these matters. He gets no gold star on his forehead. But a silver is well-earned.

Prior to May 2015, Kerry by all appearances supported interventionist policies in Ukraine and Syria. What happened in May 2015?

In the middle of that month Kerry traveled to Sochi for several hours of talks with Lavrov and several more with Putin. Many eyebrows arched, if you recall. The topic was Ukraine, and from that moment Kerry has displayed a preference, albeit attenuated, for negotiation with Russia over confrontation.

Two months later, Kerry signed the Iran nuclear deal, the success of which owed much to Lavrov’s contribution. Three months after that he entered Syria talks in Vienna that brought the U.S., Russia, the European Union, China, and several Middle East nations — including Iran — to the same mahogany table. That was a prelude to Kerry’s first bilateral agreement with Lavrov, last February — and that the precursor of last Saturday’s.

Kerry is to leave office in a few months. He will have started three wars that must be fought, even if he has so far won but a few battles in any of them. This I rate as his legitimate legacy — meaning the policy cliques will have to go on from the point he has reached. There is no turning back.

One, he has put in play our claims to exceptionalism as reflected in foreign policy. This is essential. I seriously doubt Kerry would cast the matter in such terms, I should add. But in Ukraine, Syria and even in the Iran accord, he has effectively repudiated the assertion of unchallenged primacy inherent in our century of Wilsonian mythologies. The U.S. is a nation — large, powerful, at this point not well-liked — among many nations.

Two, Kerry’s diplomacy is an implicit attack on the lunatic Russophobia that grows like kudzu all over the American conversation. Apart from the courage this requires — and it does, much — Kerry appears to recognize that blinding hysteria of this kind will do nothing for our prospects of proceeding well into a new century and its many new realities.

Three, Kerry has escalated a war with the Pentagon over control of American policy that the State Department has fought poorly since it began in the late 1940s. Of late it has been almost comical to watch as Defense Secretary Ash Carter, who displays little capacity to grasp anything more complex than a John Wayne Western, follows Kerry’s path — to East Asia, Europe, the Middle East — in incessant attempts to sabotage Kerry’s diplomatic undertakings.

The Kerry-Lavrov agreement on Syria marks a successful skirmish with the Pentagon, but the war will grind on long after Kerry is gone. It has to be won if we are to have a foreign policy as against a military policy dressed up as one.

En avant, Mr. Secretary. I hope I do not overestimate you.

This will be my last column as Salon’s weekly foreign affairs commentator. It will not be my last column. I am pleased to advise readers that this column and its writer migrate to The Nation as of the end of this month.

It would be hard to overstate my gratitude to this publication for the exceptionally generous space and the freedom it has allowed me since posting my first piece in June 2013. In the intervening years foreign policy has emerged as a pressing issue no longer the purview solely of sequestered cliques in Washington. I cannot see that Americans will ever again be able to ignore it as they often have in the past. In this context I have developed a pointedly critical take in this space — not simply for the pleasure of argument but because I view American policy as badly in need of reinvention. In this, never have my editors questioned the pieces on political or ideological grounds; I have never been asked — silently or otherwise — to trim the sails. To write knowing one is immune from either censorship or the more pernicious self-censorship is a pleasure few journalists know, regrettable as this is.

I thank Salon and its editors. And I thank my readers, all of them. The comment thread, while sometimes a swamp of misunderstanding, has been more typically filled with the kind of intelligence I have drawn from and taken as encouragement that many of us are ready, not to say impatient, to do better by way of our conduct abroad.

I wrote my first piece for The Nation in 1976. Nicely though not by design, that makes 40 years as I go on its masthead. I hope my readers will join me there to resume our conversation; I have always intended the column to be half of one.