"Sixteen Candles" is begging for the "Ferris Bueller" treatment: 13 '80s movies crying out for reissued — or long overdue — soundtracks

A deluxe vinyl "Labyrinth" release? The promised remastered "Purple Rain?" Fans would eat these albums up 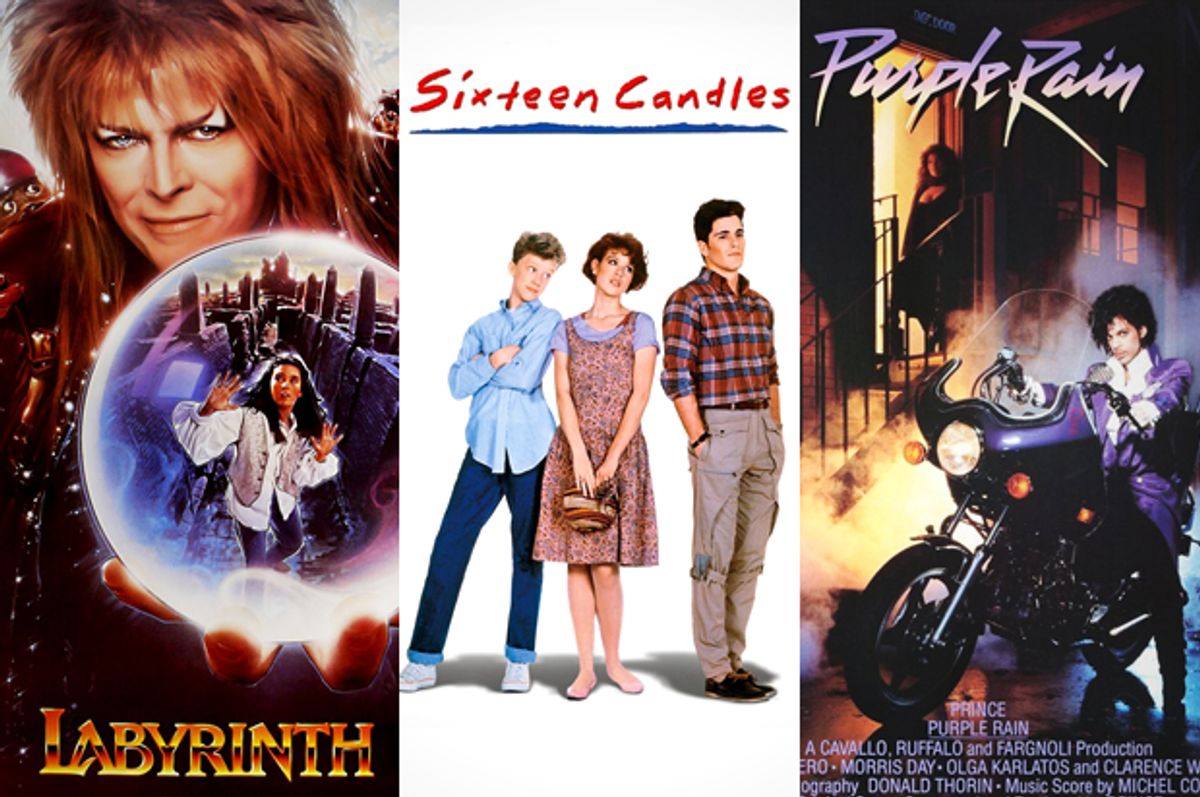 For soundtrack and score obsessives, one Holy Grail finally became available this week. Thirty years (and some change) after "Ferris Bueller's Day Off" debuted in theaters, the movie finally has an official soundtrack album for sale. Not only does this CD feature Ira Newborn's score, but the album contains most of the pop and rock songs from John Hughes' classic film — from the zany electropop of Sigue Sigue Sputnik's "Love Missle F1-11 (Ultraviolence Mix)" to the melancholy Dream Academy cover of the Smiths' "Please, Please, Please, Let Me Get What I Want."

Despite the three-decade wait, it's certainly a case of better late than never. "Obviously, it’s nice to tie in a release with the 30th anniversary for promotion," co-producer Dan Goldwasser told Salon. "But there’s such a huge fan base for 'Ferris' and 30 years worth of people clamoring for a soundtrack that fans would be happy [to have] regardless of when it came out."

As streaming-music platforms have shown consumers, it's far too easy for art to slip through the cracks or become lost to time. That's why it's so important that soundtracks like the one for "Ferris Bueller" eventually emerge: They function as vital artistic archives in addition to being entertainment.

After all, "Ferris Bueller" the movie featured a handful of exclusive songs that were (until now) unavailable elsewhere, which meant this music remained stubbornly obscure. This phenomenon isn't an anomaly: Thanks to complications with rights and licensing, the original music that has appeared in many '80s movies disappeared when films aired on TV or made it to VHS and DVD formats. Plus, the decade's movies could be difficult to find. For example, the beloved, John Cusack-starring 1985 film "Better Off Dead" was unavailable for years (except on antiquated formats such as LaserDisc), while Nicolas Cage's early movie "Valley Girl" was only available on VHS until about a decade ago.

YouTube and other video sites have certainly been a boon for obscure movies and soundtracks, of course. However, physical copies of soundtracks remain popular, especially as fodder for vinyl reissues. So in honor of the "Ferris Bueller" soundtrack finally seeing the light of day, here are 13 other '80s movie soundtracks deserving of a reissue — either due to eye-popping resale prices, sentimental value or because they never officially existed in the first place.

The soundtrack to this Hughes film features wacky New Wave and alternative-leaning rock and pop: Killing Joke's "Eighties," Wall of Voodoo's "Deep in the Jungle," Taxxi's "Forever" and, of course, Oingo Boingo's title track. Incredibly enough, however, the "Weird Science" soundtrack has never received an official release on CD — and there are plenty of in-movie songs (including Los Lobos' "Don't Worry Baby," the Del Fuegos' "Nervous and Shakey" and Van Halen's "(Oh) Pretty Woman") and Ira Newborn score bits that aren't on the vinyl edition. In fact, a late-2015 vinyl reissue omits the Newborn song "Weird Romance," which appeared on the original soundtrack LP. An official, comprehensive version would be well-deserved.

Technically, this beloved 1984 teen-movie classic did have a soundtrack: a mini-album featuring five songs, including tje Thompson Twins' film-ending love song "If You Were Here." This EP could very easily be fleshed out, however, and expanded into a full-length album. Like all Hughes films, the movie is chock full of plot-pushing songs — to name a few, Altered Images' "Happy Birthday," Wham!'s "Young Guns" and Nick Heyward's "When It Started to Begin," along with tunes from AC/DC, Night Ranger and the Specials. In short, "Sixteen Candles" is begging for the "Ferris Bueller" treatment.

Forget a deluxe reissue: How about a straightforward reissue? Original vinyl copies of this soundtrack/score hybrid are pricey on Discogs and Amazon, and even the CD is tough to find at an affordable price. The premium makes sense: Not only is the 1986 Disney movie a cult classic, but the album features original music from David Bowie, who played Jareth the Goblin King in the movie. The songs he contributed — including the dramatic "Within You" and the exuberant "Magic Dance" — stand on their own as solid compositions.

This beloved holiday film was accompanied by a low-key musical release: a promo 7-inch of Mavis Staples' "Christmas Vacation," released via her then-label, Paisley Park Records. That was it, however. In fact, there's never been a soundtrack released — save for a dubious (and hard-to-find) 1999 CD pressing of a 10th-anniversary edition of the soundtrack, featuring more holiday tunes and parts of the score penned by the legendary Angelo Badalamenti.

The soundtrack of this 1989 dark comedy is the delightfully unsettled score from David Newman. "Heathers" is ripe for a reissue, however, due to its scarcity and glaring omissions: two versions of "Que Sera Sera (Whatever Will Be, Will Be)" — by Syd Straw and Sly & The Family Stone, respectively — and the indelible "Teenage Suicide (Don't Do It)." The latter tune was written by noted producer-musician Don Dixon and performed by the '80s power-pop dream team of Dixon, Mitch Easter, Angie Carlson and Marti Jones. (Completists needing a physical copy of the song can find it on Dixon's 1993 greatest hits album, "(If) I'm A Ham, Well You're A Sausage.")

In 2014, Warner Bros. sent out a press release touting that it had forged a partnership with Prince. Part of this new relationship involved celebrating the 30th anniversary of his classic movie and album "Purple Rain," the release noted: "For the first time, Prince will be releasing a digitally re-mastered, deluxe version of this classic album." Considering the music and live material reportedly sitting in Prince's vault, this was a tantalizing news tidbit. But to the chagrin of fans, the promised reissue has yet to materialize, leaving nothing but guesses as to when — or if — something might surface.

Back in 1983, New Wave movie classic "Valley Girl" received the "Sixteen Candles" soundtrack treatment: a six-song EP featuring tracks from acts such as the Plimsouls, Josie Cotton and Sparks. Rhino Records remedied this scant soundtrack in the mid-'90s by releasing two CDs: a fleshed-out full-length album and a second volume called "Valley Girl: More Music From the Soundtrack" with tunes from (and inspired by) the film. The latter is out of print and features some crucial tunes from the movie, including Sparks' "Eaten By The Monster of Love" and Bonnie Hayes with the Wild Combo's "Girls Like Me." Put simply, we're long overdue for a true, comprehensive "Valley Girl" soundtrack.

This double LP accompanying the ambitious (but underperforming) New York City-set movie functioned as a primer to the nascent punk, post-punk and New Wave movements: The track list includes Roxy Music, Pretenders, Talking Heads, Joe Jackson, Lou Reed and XTC, to name just a few. It's easy to find on vinyl, but a deluxe reissue detailing why the movie and music still matter would be well-deserved.

In the same vein as "Times Square," this disorienting, nihilistic cult punk flick "Smithereens" shows New York at its grittiest. Appropriately, the indie film features jittery, unsettled music composed by members of the Feelies, as well as cuts from the band's 1980 debut, "Crazy Rhythms," and songs from Richard Hell & the Voidods and ESG. Unlike "Times Square," however, there's never been an official soundtrack released — an appalling oversight.

The "Vision Quest" soundtrack was notorious for featuring Madonna's hit "Crazy For You," along with songs from Journey, Sammy Hagar and the Style Council. It's also quite easy to find at a cheap price. The "Vision Quest" score, however, was composed by the legendary Tangerine Dream (back in the news thanks to the popularity of Netflix's "Stranger Things") and is only available via unofficial, bootleg means. A reissue with the Tangerine Dream music tacked on — or even a compilation of impossible-to-find scores from the group — would be a boon.

You'd be forgiven if you aren't familiar with this obscure Australian movie, which starred late INXS frontman Michael Hutchence. The equally rare "Dogs In Space" soundtrack, however, deserves to be plucked from oblivion, thanks to rare instances of Hutchence's solo work, as well as songs from Iggy Pop, Gang of Four and Brian Eno.

There was never an official soundtrack for this cult skate movie, despite a rowdy in-movie appearance by Red Hot Chili Peppers and songs from Circle Jerks, Fear, Devo and Meat Loaf. Although certain tunes (such as the Bangles' "Want You") have surfaced elsewhere, a compilation of music from "Thrashin'" would hang together nicely.

The soundtrack to "Better Off Dead" is difficult to find these days. What makes it ripe for reissue, however, is what wasn't included on it — stellar songs such as Hall & Oates' "She's Gone," Simple Minds' "Street Hassle" and Muddy Waters' "Mannish Boy," all of which appeared in the movie. An expanded, more complete edition makes perfect sense, considering the enduring popularity of the movie.