While Trump chided Hillary Clinton for calling some of his supporters "deplorable," some were punching protesters 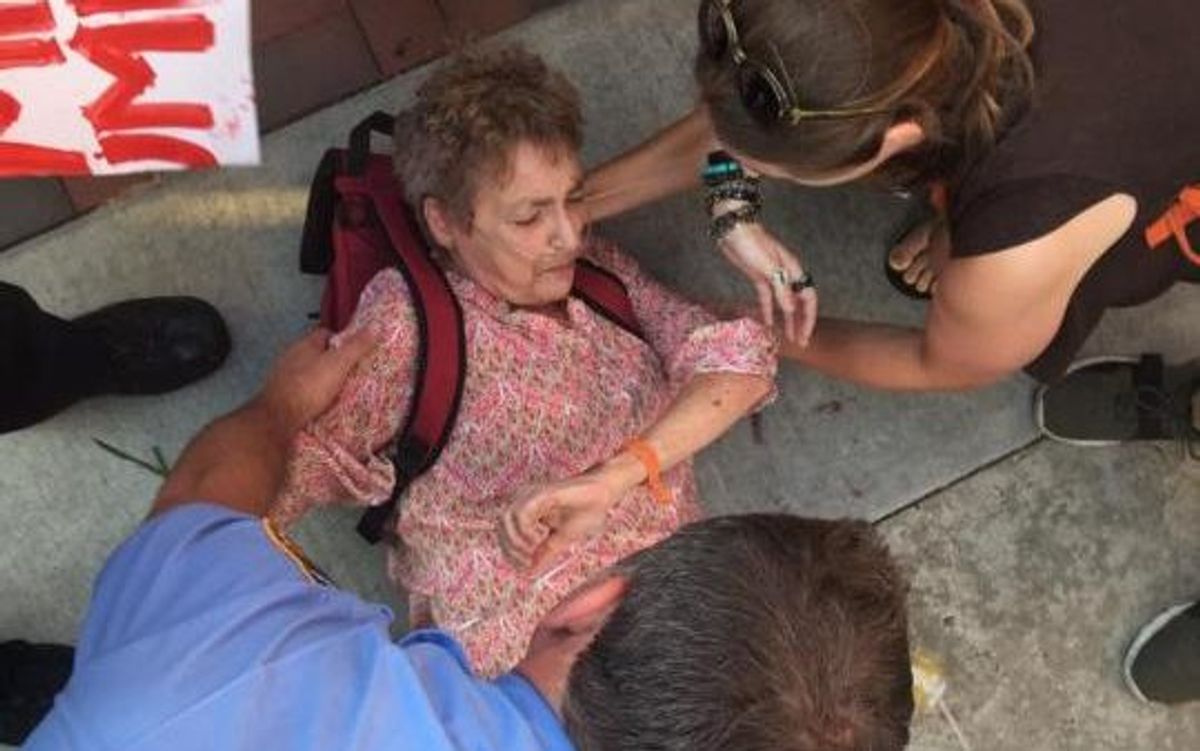 Shirley Teter, 68, was attacked outside a Donald Trump rally in Asheville, N.C., on Monday (FACEBOOK/MATEO PRECIO)
--

Police in Asheville, North Carolina, have issued an arrest warrant for a South Carolina man after he allegedly sucker-punched a 69-year-old woman outside a Donald Trump rally Monday night.

“Is there anywhere in America more fun to be than a Trump rally?” the GOP nominee said inside the U.S. Cellular Center after berating rival Hillary Clinton for her use of the term "deplorable" to describe some of his supporters. "She calls you 'deplorable,'" Trump told his gathered supporters, "I call you hardworking."

Outside he rally, Shirley Teter, a long-time protester who told local reporters that she had participated in civil rights and anti-war protests in the 1960s, was protesting the Republican nominee when she was coldcocked by one of his "hardworking" supporters.

In an interview, Teter explained that she had been outside of the rally responding “Dump, dump, dump,” as fans of the GOP presidential candidate chanted, “Trump, Trump, Trump,” and added, "It was kind of comical.”

Teter then shouted to exiting Trump supporters after the rally ended, “You better learn to speak Russian.” She was referring to the GOP nominee's positive comments about Russian President Vladimir Putin. "The first two words are going to be ha ha."

That is when Richard Campbell of Edisto Island, South Carolina, turned and allegedly attacked her.

He stopped in his tracks, and he turned around and just coldcocked me," Teter told western North Carolina's WLOS 13. Teter said she fell on her oxygen tank that she carried in a backpack after being punched and endured a sore jaw and ribs and a cut on her elbow from the attack. Police said they did not arrest Campbell at the time because they didn’t witness the incident.

Matt Price, a witness, told the Citizen-Times of Asheville that he saw Teter fall and heard a loud “metal clank” when her oxygen tank hit the ground. “Then a little eruption ensued and some people chased down that guy and there was a little heated moment right there before the cops stepped in.”

Five people were arrested on Tuesday and warrants were issued for two more relating to violence inside and outside the rally, police said. Asheville officers also confiscated a firearm from someone outside the center.