When pork flies: The F-35, the Pentagon's $1.1 trillion flying money pit, is (sort of) ready for duty

The lemon has liftoff! After 20 years, the most expensive weapon in history is being put into service 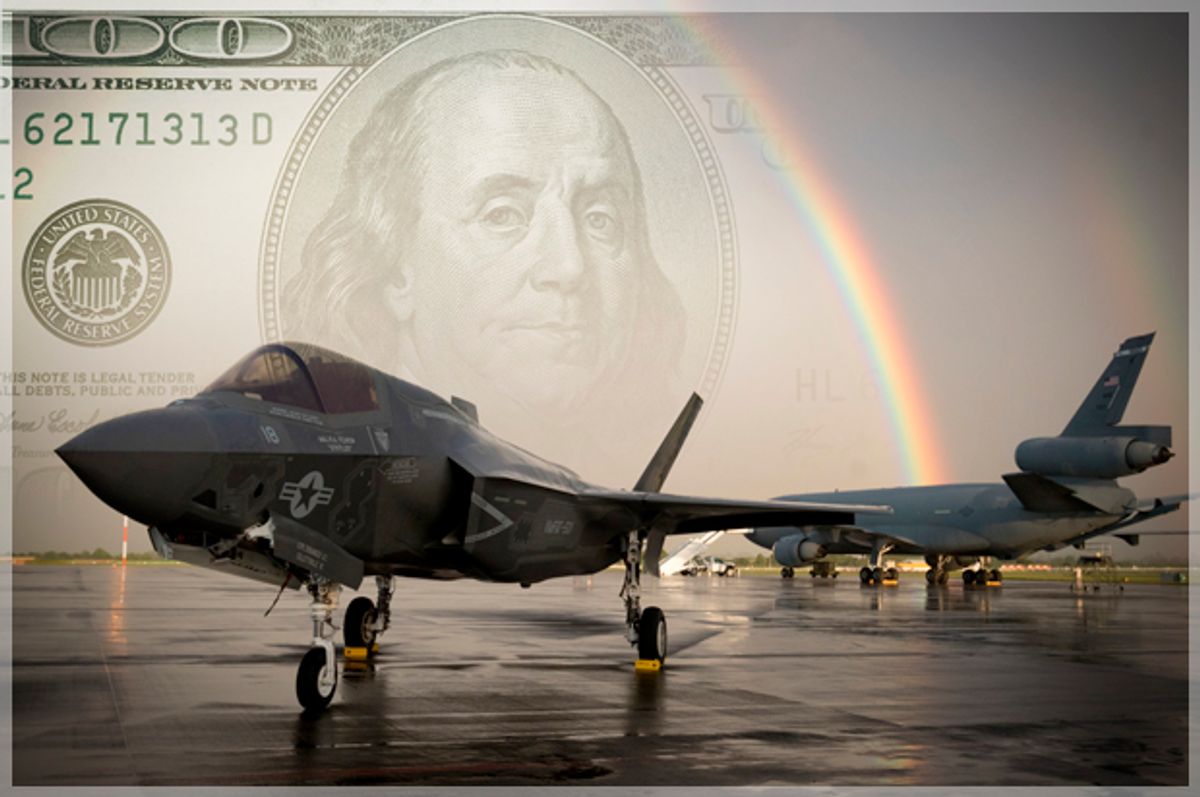 Twenty years since the Pentagon began taking bids from defense contractors, the F-35 fighter jet — the most expensive weapon ever made — is finally ready to see active duty over the Pacific Ocean. The U.S. Marine Corps expects to deploy 16 of the stealthy high-tech warplanes early next year at Iwakuni Air Station in Japan. From there, U.S. pilots will begin testing the jets in regular noncombat operations from the Navy’s USS Wasp amphibious assault vessel in what one commanding general has described as the “school of hard knocks.”

It’s a curious choice of words considering the checkered history of the much-maligned and madly over-budget F-35, which has basically been taking knocks since it was first conceived.

Years of delays, management shakeups, engine and software problems — and most important — cost overruns have made this Lockheed Martin jet initiative a punching bag and pork barrel project.

As far back as 2001, the cost of the program was termed astronomical, with initial estimates pegged at $233 billion. The price tag has ballooned to about $400 billion, with plenty of glitches still to be worked out. (A high-ranking member of the Pentagon is denigrating the jets for their defects even as they’re being declared ready for combat.) Throw in the average price of $135 million a plane and pilot helmets that will run $400,000 apiece, and the total cost of the F-35 program will exceed $1.1 trillion.

In case you’ve been wondering where your hard-earned tax dollars go, now you know.

Recent efforts to reel in costs have bordered on satire. In July, Lockheed Martin announced plans to spend an additional $170 million as part of a cost-reduction program that it claimed would reduce other costs by $1 billion over five years. Then just a month later, the Pentagon approved an additional $1 billion for Lockheed Martin to offset the aerospace company’s costs to suppliers, effectively wiping out whatever taxpayer savings Lockheed had been touting just weeks earlier.

Despite the many problems and immense costs, the F-35 program is so intricately linked to the military-industrial complex that efforts to rein it in have been fruitless. Major global politically connected aerospace companies involved: In addition to Lockheed Martin there’s Pratt & Whitney, Northrup Grumman, Britain’s BAE Systems and Norway’s Kongsberg Gruppen.

Then there’s the complex network of 1,300 smaller suppliers that are providing everything from the wiring to software code. And there are the American jobs hanging in the balance: More than 130,000 people in 45 states are employed by the F-35 program, according to Bloomberg, making it the most striking example of a U.S. defense project becoming so ingrained into the fabric of the U.S. economy that trying to tamp its excesses becomes politically unpopular and economically painful.

Peacenik former presidential candidate Sen. Bernie Sanders has quietly courted Lockheed Martin to bring business to his home state of Vermont even as he has derided the defense industries. In an odd twist, the normally hawkish Sen. John McCain has emerged as one of the most acid-tongued opponents of the program.

Meanwhile, problems with the jets are nowhere near being resolved. Although deployment of the F-35B (the one that can take off and land both horizontally and vertically) is slated for early next year, any of the numerous test flights could uncover more new problems.

Both the U.S. Marine Corps and the U.S. Air Force have recently declared their versions of the F-35 combat ready, but a memo issued in late August from the Pentagon’s top testing official, Michael Gilmore, lambasted assertions that the planes were anywhere near ready, declaring them unsuitable for combat missions. The planes “will need support to locate and avoid modern threats, acquire targets and engage formations with enemy fighter aircraft due to outstanding performance deficiencies,” the 16-page memo first acquired by Bloomberg stated.

Among the problems: The jets don’t carry much ordnance (just two missiles and two bombs), possess a poor cannon design that reduces accuracy and lack the capacity of existing jets when in close air-support situations.

But the U.S. Armed Forces is moving ahead with the F-35 anyway. After 20 years and $400 billion of taxpayer money, the military has spent too much not to go the last yard — and $700 billion — to see this program through.