Everyone calm down about a bare face: Alicia Keys going makeup-free shouldn't be a "revolutionary" act 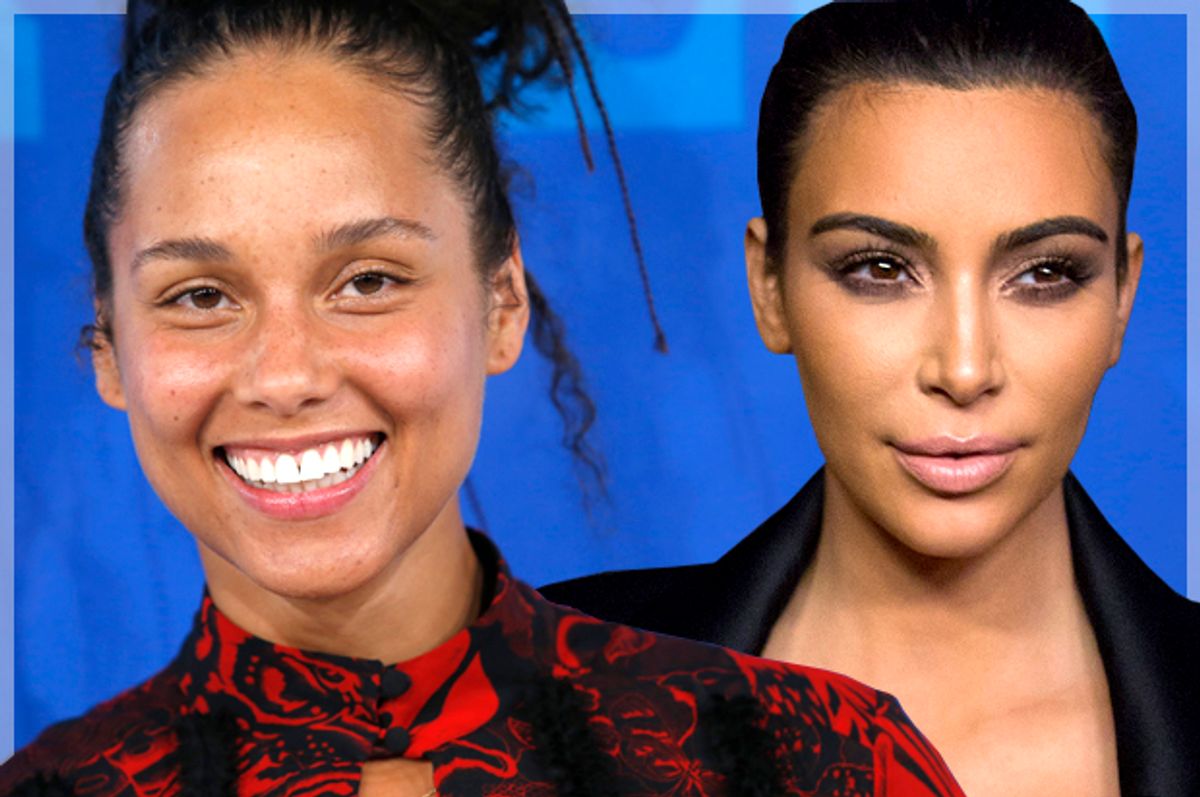 It's sort of funny that when a woman does something the vast majority of men do every single day, it's treated as a subversive act. And yet there Alicia Keys is, walking around outside and in the world without eyeliner on.

The Grammy-winning co-host of "The Voice" has been raising a stir over the past several weeks, ever since she appeared seemingly makeup-free at a flurry of appearances, including the Democratic National Convention, the Video Music Awards and Tom Ford's fashion show. In May, she wrote an essay for Lena Dunham's Lenny Letter in which she explained her choice to go barefaced for a shoot for her new album, explaining, "I hope to God it's a revolution. 'Cause I don't want to cover up anymore. Not my face, not my mind, not my soul, not my thoughts, not my dreams, not my struggles, not my emotional growth."

Her more natural appearance has been greeted with criticism from some online observers — and strong support from others, including her husband Swizz Beatz, who told detractors, "You're mad because that person didn't put makeup to please you? What sh_t is this?"

In a Wednesday New York Times feature, writer Penelope Green explored Keys' one-woman revolution from the inevitable — and eternally recurring — feminist perspective. In it, she quoted feminist activist and author Letty Cottin Pogrebin, who tells the Times that Keys is "not just talking about the tyranny of makeup. She’s talking about female authenticity. She’s challenging the culture’s relentless standards of feminine conformity and the beauty industry’s incessant product hype."

Pogrebin also ruefully noted that for her, Keys' Lenny Letter essay appeared with a pop-up ad for skin cream. For me, the Times' story appeared next to one for beauty-products subscription service Birchbox.

While Keys is, for now, mostly a one-woman revolution, there have been other, smaller declarations of makeup independence lately. The allegedly barefaced celebrity magazine cover is all but a cliché now, and "natural" shots are part of any female celeb's savvy social-media feed. Two years ago, author Deborah Kopaken wrote an essay about her preference for doing without makeup, noting, "A man without makeup is a man. A woman without makeup is making a statement that can grossly interfere with how she is viewed, paid, and heard."

But while the act of not wearing makeup is a declaration of independence for some, the knee-jerk media spin can make things seem like embracing the move is waste of time. To which I reply: Not without my lipstick. I am a moderate but insistent makeup wearer. I don't own a lot of products or tools and I doubt I spend more than three minutes putting my face together in the morning. But I do it religiously after my brushing my teeth, even if I'm not leaving the house. I love Benefit's Roller Lash mascara more than I love most people. If wearing makeup feels like a grind, don't do it. Just don't assume anyone else is being tyrannized by the patriarchy here.

And after years of heavy, dramatic reality-star style makeup being the popular aesthetic, it may just be that the moment is right for things to shift a little. The mod look of the '60s gave way to the more natural '70s. The bold '80s style of the early music-video era was followed by grungy '90s heroin chic. The pendulum keeps swinging.

Shannon Park, a New York makeup artist, told me that after years of heavy-handed excess, "Keys feels like a palate cleanser after all this bullsh_t Instagram and YouTube stuff. I think it's this clean, wonderful look, and it's getting attention because we've been mired in this way out of control stuff. I get clients who say, 'I want false lashes and I want the Instagram brow.' They want it to the point that it looks like almost like tinfoil on the cheekbone. It's been making women feel like they should ask for something that's not obtainable or attractive."

Yet Park also said ultimately it's exciting that a range of women from Kim Kardashian to Alicia Keys are leading the charge and pushing beauty beyond "your normal white girl palettes." The more options for what feels and looks right for women whatever their preferences or number of Sephora points, the better. As Alicia Keys told her Twitter followers last month, "Me choosing to be makeup free doesn't mean I'm anti-makeup. Do you!"