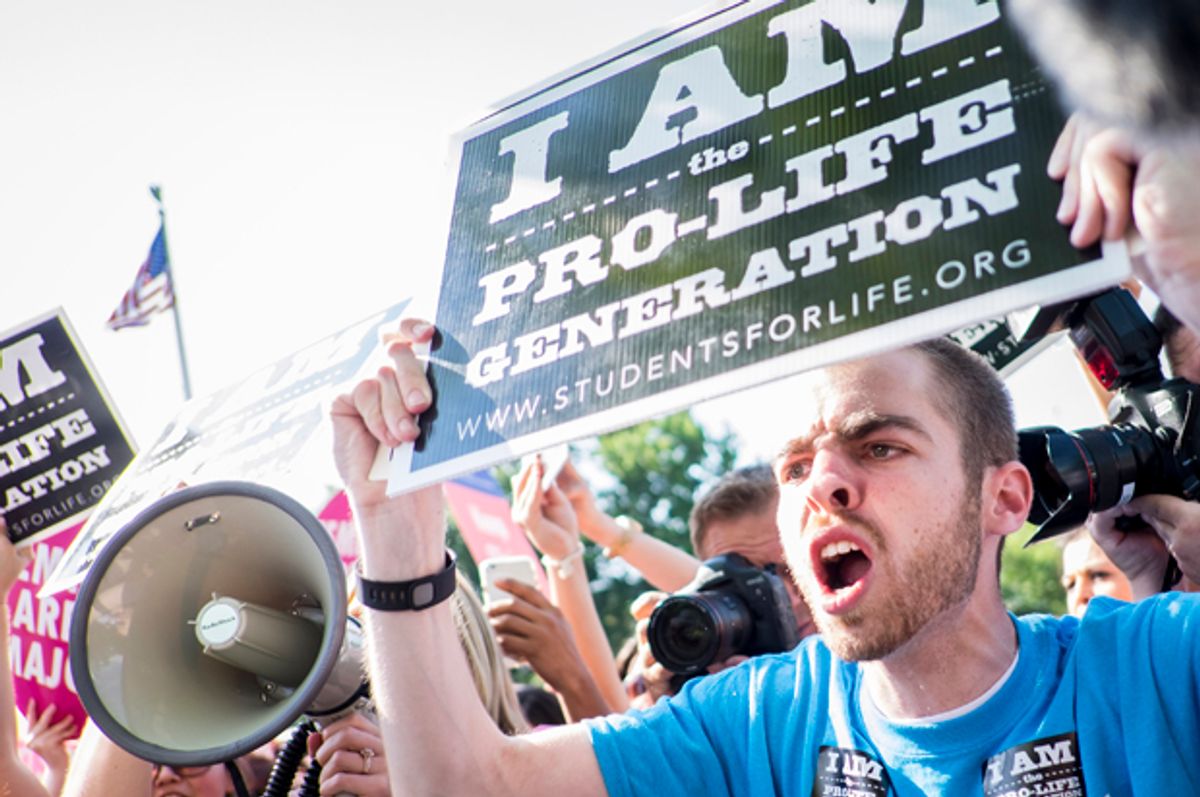 Sometimes they are called “pregnancy resource centers” or “pregnancy support centers.” Most commonly, however, they are known as “crisis pregnancy centers,” and you might have seen advertisements on buses and trains, or billboards that say things like: “Pregnant? Scared? We can help.” There’s often a pensive woman’s face on the ad, sometimes, there are also baby hands or feet.

A crisis pregnancy center, also known as a CPC, offers counseling and other prenatal services from an anti-abortion perspective. Many of the centers are affiliated with national anti-choice organizations and are part of evangelical Christian networks, like Care Net and Heartbeat International. By their own count, there are at least 3,500 crisis pregnancy centers in the U.S.  Compare this to the ever dwindling number of abortion clinics, which is now at 553 according to the most recent data from the Guttmacher Institute.

Many of these centers are not forthright in their advertising about the fact that they are not staffed by medical personnel, and will not offer abortion services.

The tactics used by CPCs to ensure that women don’t seek abortions elsewhere can be downright manipulative and unethical. Women are often told that abortion can cause breast cancer and mental health problems. Neither of these things is true, as rigorous scientific research has proved, time and again.

The first crisis pregnancy center opened in Hawaii in 1967, founded by Robert Pearson, a builder who turned his attention to growing a national cadre of crisis pregnancy centers. Pearson went so far as to pen a guidebook called “How to Start and Operate Your Own Pro-Life Outreach Crisis Pregnancy Center.” The manual encouraged duplicity from the outset, encouraging CPC staff by telling them “there is nothing wrong or dishonest if you don’t want to answer a question that may reveal your pro-life position by changing the caller’s train of thought by asking a question in return.” The manual recommended answering the question “are you a pro-life center?” with the response, “We are a pregnancy testing center... What is pro-life?” and instructed staff to “never counsel for contraception.”

The egregious behavior of these centers continues relatively unabated despite being well-documented by investigation after investigation into their practices. Some investigations have shown that the help that the centers promise to their pregnant clients, if they choose to give birth and parent, amounts to very little. Usually, CPCs spend far less on actual financial help to those they convince to parent than they do in advertising, and convincing women not to have abortions.  A recent study done by Rewire, found that CPC’s are using targeted surveillance and digital advertising to allow them to advertise directly to the mobile phones of those inside or near Planned Parenthood clinics.

A study by the Guttmacher Institute documented the serious public health implications, including the dangers of disseminating false health information, created by crisis pregnancy centers. In particular, this study found that some CPCs counsel women that they have plenty of time to decide whether to have an abortion, when they might have just a few weeks.

CPCs in Maryland and New York have told women that abortion is legal throughout pregnancy. In both states there is a cutoff at 24 weeks gestation. Additionally, the study found these centers do not provide information about condoms or STI prevention, or provide inaccurate information. This is important because the majority of teenagers who go to a CPC to find out if they’re pregnant are not, but they are more likely to be engaging in high-risk sexual behavior. If the CPC gives tells them that condoms don’t work, they are not only failing to offer medically accurate information they are increasing the risk of contracting STI’s or becoming pregnant in the future.

The first political irony is the most straightforward: Crisis pregnancy centers are unregulated political entities that falsely advertise themselves as health care clinics.  Anti-choice lawmakers around the country have passed regulation after regulation requiring abortion clinics to meet increasingly stringent medical standards, like requiring ambulatory service centers (a provision recently struck down by the Supreme Court’s ruling on Texas House Bill 2 as unconstitutional) and requiring patients to return to the clinic up to four times for a medication abortion, coming to the clinic to be supervised each time they take a pill. These lawmakers have argued time and again, that these restrictions are to protect women’s health, not to decrease access to abortion care. Those same lawmakers, in Texas and other states around the country, see no problem with the proven false advertising and medical misinformation that CPC’s in their states provide.

And this brings us to the second, related, conundrum. In fact, many anti-choice lawmakers not only support CPCs politically, they allocate federal dollars to subsidize them. The political inconsistency belies the truth - that regulations on abortion clinics aren’t about increasing safety at all, but instead are about limiting access.

Texas just allocated 1.6 million taxpayer dollars to an anti-abortion entity that will pay CPCs — that do not provide a full range of reproductive health services — through a state program called “Healthy Texas Women.” In Indiana in 2015, Gov. Mike Pence authorized $3.5 million in federal TANF funds for the support of crisis pregnancy centers. The Guttmacher Institute cites seven states with line items in their budget for alternatives to abortion.

This September marks the 40th Anniversary of the Hyde Amendment, the appropriations rider that bars the use of federal Medicaid funds to pay for abortion care. Almost three-quarters (72 percent) of adult Medicaid enrollees are women of reproductive age. These numbers do not include the men, and gender non-conforming folks who may need abortion care, and rely on Medicaid for that care. Only 17 states have a policy that directs Medicaid to pay for all or most medically necessary (with different definitions of what is considered medically necessary) abortions. In Iowa, the state’s governor must approve any abortion paid for by the Medicaid program.

This, while abortion care, determined by all rigorous and medically accurate scientific research to be safe, is not funded by federal dollars, creating a two-tier system of reproductive health care access in the U.S. If you can afford it out of your own pocket, you have the right to an abortion. If you can’t, then it’s your problem to figure out. Abortion is the only legal medical procedure treated this way by federal law.

The political conundrum gives way to a moral conundrum. We live in a country where abortion care could be denied to a woman if her governor does not approver of the reason she seeks an abortion. Where a survivor of rape or incest could be denied abortion care because they couldn’t get to an abortion clinic which is hundreds of miles from where they live. Where, if a person is misled to believe that she will never be able to have children if she has an abortion, or that she will get cancer, there are no consequences for the people that lied to her. Not only are their no consequences, but, in fact, it could be your taxes that pay their salaries.