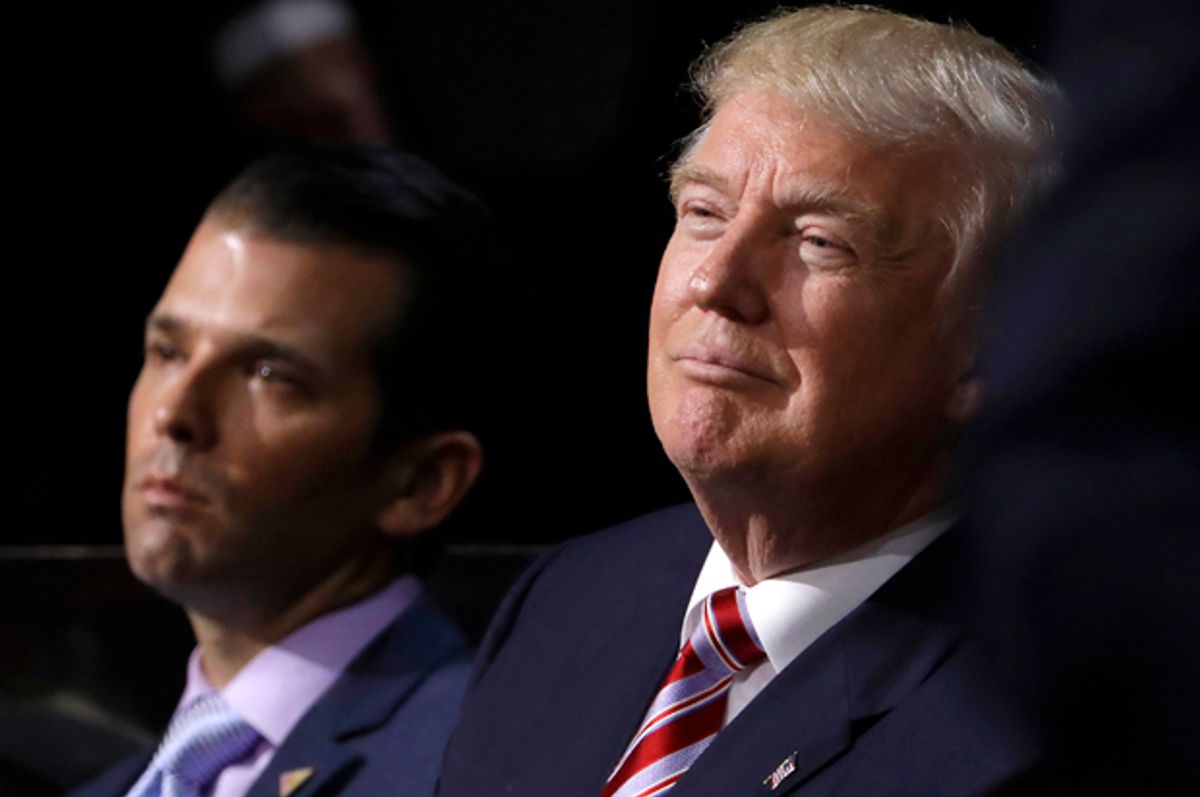 It’s a rare thing to see honesty emerge from Donald Trump’s presidential campaign, but we were all treated to a bracing dose of forthrightness this week by the Republican candidate’s son, Donald Trump Jr., on the subject of his father’s tax returns. Speaking with the Pittsburgh Tribune-Review, Trump Jr. explained that his dad’s tax information would remain hidden because if people saw it, then they’d talk about something other than what the campaign wants them to talk about.

“He's got a 12,000-page tax return that would create . . . financial auditors out of every person in the country asking questions that would detract from (his father's) main message,” the paper reported Trump Jr. as saying. That’s about as clear-cut an explanation as you could hope for: The campaign will keep on stonewalling because it doesn’t want people scrutinizing and talking about Donald Trump’s tax history and financial arrangements.

What makes this burst of honesty so bracing is the months-long stream of lies and dodges that preceded it. Way back in January, Trump said on NBC's “Meet the Press” that his returns were being prepared for release, but it was going to take a while because of the document's size — 12,000 pages, as Trump Jr. said. Almost exactly a month later at one of the GOP primary debates, Trump said that he will release his returns, but couldn’t at that precise moment because “I'm being audited now.” (As the IRS commissioner himself made clear, there’s nothing about an audit prevents the release of tax returns.)

In May Trump insisted there was “nothing to learn” from his taxes and repeated that he’d release them when the audit was done. But by midsummer, his top campaign staffer was telling news outlets, “Mr. Trump has said that his taxes are under audit and he will not be releasing them.”

Just a couple of weeks ago, Trump said, “I don't think anybody cares” about his taxes “except some members of the press.” That position, of course, was undermined by Trump’s son, who said that “every person in the country” would be poring over them.

So it’s just been lies on top of other lies, all told with the expectation that reporters would just eventually just get tired of asking and give up. The fact that the Republican presidential nominee’s months-long campaign of obvious prevarication surrounding this issue of basic transparency isn’t treated as an ongoing, campaign-defining scandal is a testament to the degree to which that strategy has succeeded.

And it’s to the Trump campaign’s benefit that it isn’t under constant, relentless pressure to explain away all these lies. There’s quite obviously something in those returns that Trump does not want the public to see: evidence pointing to his real net worth, a paper trail documenting his shady charitable giving or his effective tax rate (which in past years has been zero percent), etc. Our seeing any of these things are highly relevant to Trump’s message as a candidate: his business acumen, his fabulous personal wealth and his strong record of dealmaking.

Trump and his campaign staff are clearly sensitive to questioning about these issues: An aide to Donald Trump Jr. jumped in and halted an interview with a local news outlet when he was asked about reports of his father’s corrupt charity practices. At the same time, all the top Republican officials in Trump’s orbit are releasing their own tax returns, including the speaker of the House and Trump’s running mate. Every single alarm bell was clanging at full volume before Trump’s son came right out and told everyone that his father’s tax information is a political problem the campaign wants to sidestep.

And yet somehow the tax returns and Donald Trump’s hidden financial information aren’t the first, second and third questions he’s asked during his many press availabilities.