Welcome back, Bridget Jones: Still relatable after all these years

If "Bridget Jones's Diary" was a Gen X "Pride and Prejudice," the new "Baby" film is our "Persuasion" 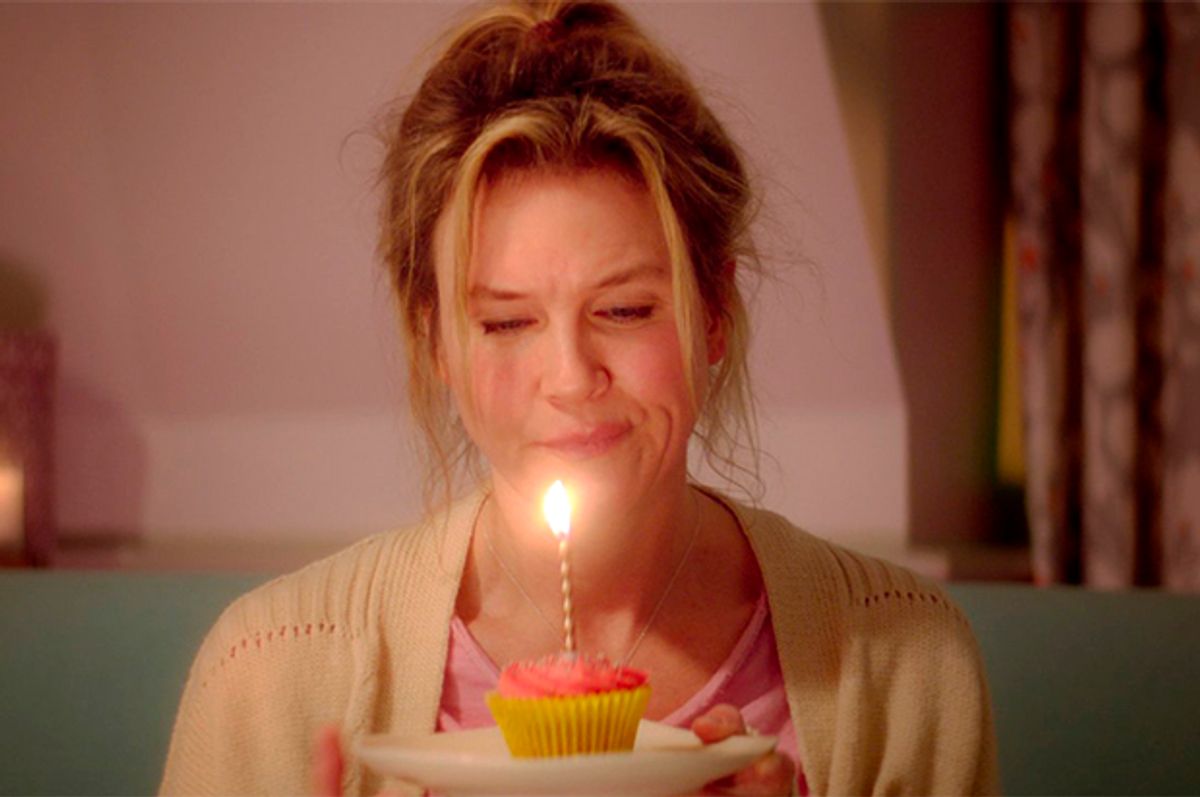 She was the everygirl of a generation — the flustered, romantic, ambitious, all-too-relatable fictional Londoner balancing love, career and an eccentric family. But a dozen years after Bridget Jones last appeared on screen, is the now 40-something heroine still everybody's imaginary BFF? Or to put it another way, is the arrival of "Bridget Jones's Baby" a blessed event or just a whoops?

I can vividly recall when I first encountered author Helen Fielding's iconic character. Back in the 1990s, a friend living in London shipped me a novel that had taken the U.K. by storm and insisted that I read it. Based on a popular serial in The Independent, "Bridget Jones's Diary" was a very modern riff on "Pride and Prejudice" — an Austen tale but with smoking, infidelity and regrettable sex. The cover featured a woman holding a cigarette in one hand and a glass of wine in the other. I was all of two pages in, devouring Bridget's eager, unrealistic list of New Year's resolutions ("Form functional relationship with responsible adult. Learn to program video."), when I knew I'd fallen in love with her.

By the time the novel had become a sensation in the U.S., Bridget found herself swept up into a zeitgeist that included a quartet of far more sophisticated single ladies: Carrie, Miranda, Charlotte and Samantha. And at a cultural moment in which the waifish Ally McBeal was America's designated daffy fictional heroine, you could see how Bridget always seemed bigger, boozier and always, always messier than the rest. No wonder she was, for many of us, the favorite.

When Texan gal Renee Zellweger was cast in the role for the 2001 film, there were initially howls of concern over her fitness for the role, which soon turned into an exhausting public conversation about her fitness, period, as she gamely packed on pounds to play the ostensibly schlubby character. Perusing the book again recently, I was horrified to realize that Bridget, a character of seemingly average height who obsessively tracks her caloric intake and how much alcohol she drinks, spends most of the novel hovering from 125 to 130 pounds. It hadn't even fazed me at the time, no doubt in part because I was younger and more easily persuaded that a woman's value is in reverse proportion to her number on a scale. The benefits of growing older: Reading those numbers now — and seeing Zellweger's far-from-overweight body in the original "Bridget Jones's Diary"— and thinking, What crazy person thinks this is fat?

Zellweger, meanwhile, brilliantly inhabited the role, and a classic rom-com was born. And though I initially assumed that Bridget was merely the patron saint of flustered, non-Manolos-wearing Gen Xers like me who "feel like an idiot most of the time," she has continued to charm new generations of young women.

Feminist writer Jessica Wakeman recalled first having seen the film as a high school student and finding inspiration in it. She remembered feeling, "It wasn't overtly feminist, but it felt feminist," Added Wakeman: "Here are women who have lives that will be like my life. For me, Bridget Jones was someone who seemed to be realistic, that she'd be not necessarily a role model, but a template."

But it wasn't until years later when she was an adult that Wakeman became what she called "a full-fledged fan of the movie." Even now, she said, Bridget feels believable. For Wakeman, Bridget has always "felt like somebody who could be your or your friend. She was a whole person. She had a professional life and a family life and friends and multiple men she was pursuing at once. She was more three-dimensional than most rom-com characters get to be."

Over the years, other similarly shambling female characters have come along. Though Bridget clearly hails from a long line of flummoxed heroines like Annie Hall, it's hard to imagine Annie in "Bridesmaids" or Amy in "Trainwreck" or Abbi and Ilana in "Broad City" without her. Bridget herself, after the lamentable sequel book and film that soon followed "Diary," entered a period of long silence. But now, like a character out of science fiction, her story has gone off in two directions. I strongly prefer movie-Bridget's fate.

Three years ago, I was gifted with a copy of the then-new novel "Bridget Jones: Mad About the Boy" for my birthday. It was difficult to contain my horrified disappointment. I already knew that in Fielding's 2013 return to the character, Bridget's soulmate — the stuffy-yet-sexy Mark Darcy — had been killed off, leaving her a widowed mother of two. And there was no way in hell I would be reading that story. I wanted to leave Bridget exactly where I'd seen her at the end of the first book — fulfilled, surrounded by friends and partnered with a wonderful man. I left the novel in my building's laundry room, its spine uncracked, its pages unblemished with soy sauce and buttery muffin crumbs. (You are perhaps beginning to see why I identify with Bridget.)

That's why I confess that after a summer of being inundated with the trailer for "Bridget Jones's Baby," I had strong reservations about her latest cinematic incarnation. Some relationships with the women in your life naturally endure. You go through the years together, surviving bad marriages and bad haircuts side by side. Others flicker on and off, but even if you drop out of touch for 10 years, you always seem to pick up right where you left. And every now and then, you're reminded of the others — the person who pops up tagged in a Facebook photo and leaves you thinking, Huh, so that's what happened to her; pity. I didn't want Bridget to fall into the last category.

But you know what? Don't be fooled by the opening moment of film, featuring Bridget still on the couch a decade later, still drinking wine and listening to Celine Dion belting "All By Myself." That grim scenario is quickly upended. For starters, Mark has been brought back to life. In fact, he was never dead. In "Bridget Jones's Baby," Bridget is not a 51-year-old widow but a 43-year-old still-singleton, and Mark (Colin Firth, who continues to own the "chilly yet smoldering" vibe) is just the ex she never made it down the aisle with. But after Bridget spends an impulsive and sentimental night with him — shortly after she has had a similar fling with the charismatic entrepreneur Jack (Patrick Dempsey) at a music festival, too — she finds herself knocked up and torn between two handsome, successful, passionate, would-be baby daddies. Nice going, girl.

Though the film — directed by Sharon Maguire, who helmed the first "Bridget" — doesn't rise to the sweet heights of the original, it holds up surprisingly well, especially for the dreaded "third installment in a franchise" genre. It's not "Before Midnight," but it keeps its characters grounded in the humanity of the series. Bridget is now a successful TV news producer, yet one facing the demands of a new team of contemptuous millennial overlords. She is still close to her original squad of pals, but they're all paired off now with families of their own. And though she's changed over time, trading her diary for a tablet, quitting smoking and losing weight — when she reveals her pregnancy, a family member is cruelly relieved she hasn't just become "fat again" — she still screws up, falls down and then resiliently keeps going.

It's an amiable film, with a scene-stealing Emma Thompson playing Bridget's earthy obstetrician, and just enough crowd-pleasing callbacks to her caddish former boss Daniel Cleaver (played by Hugh Grant in the first two films) and Mark's notorious Christmas sweater. At the screening I attended, a reworking of a line from the first movie drew audible sighs from the audience. And though I can't predict how the film will do at the box office, I am entirely in favor of movies that normalize people older than 40 having a sex life. Yes, Bridget is older. No, she doesn't look like she did in 2001. Grow up and deal with it, haters.

This is very much a new Bridget for a new era. And it's intriguing that the dilemma of "Bridget Jones's Baby" is one that feels appropriately suited to midlife. It's not about dating cads or nice guys any more. It's about what, at this point, still looks like hope. If "Diary" was a riff on "Pride and Prejudice," "Baby" is Jane Austen's "Persuasion," a meditation on growing older, about letting go of the past and maybe getting second chances.

As Imelda Whelehan, a University of Tasmania professor and author of several books including "Helen Fielding's Bridget Jones's Diary: A Reader's Guide" and "The Feminist Bestseller," told me via email, "I'm really looking forward to it. The trailer promises the best of the first film as well as most of the characters we have come to associate with the cycle. The central premise (Bridget gets pregnant but by who?) has a great deal of comic promise and takes the trope of Mr. Right versus Mr. Maybe up another notch."

Whelehan added that the timing might be right for a check-in with the character, saying, "She has represented the unformed adult in many of us — what will it take for her to really 'grow up' or does she reassure us that adulthood is a lifelong project?" Plus, she said, "She articulates our contradictions — our aspirations versus our pragmatic selves (particularly in romance) in ways that even Helen Fielding was unable to measure. If Bridget can survive into mid-middle age, maybe we all can."

And though she remains far from perfect, in her latest chapter she's still our flawed and eternally hopeful Bridget Jones. I still like her, just as she is.