The media's colossal failure: Trump continues to get away with his many scandals, lies and shady business ties

Newsweek's bombshell report this week should have shaken the Trump campaign to its core. Why hasn't it? 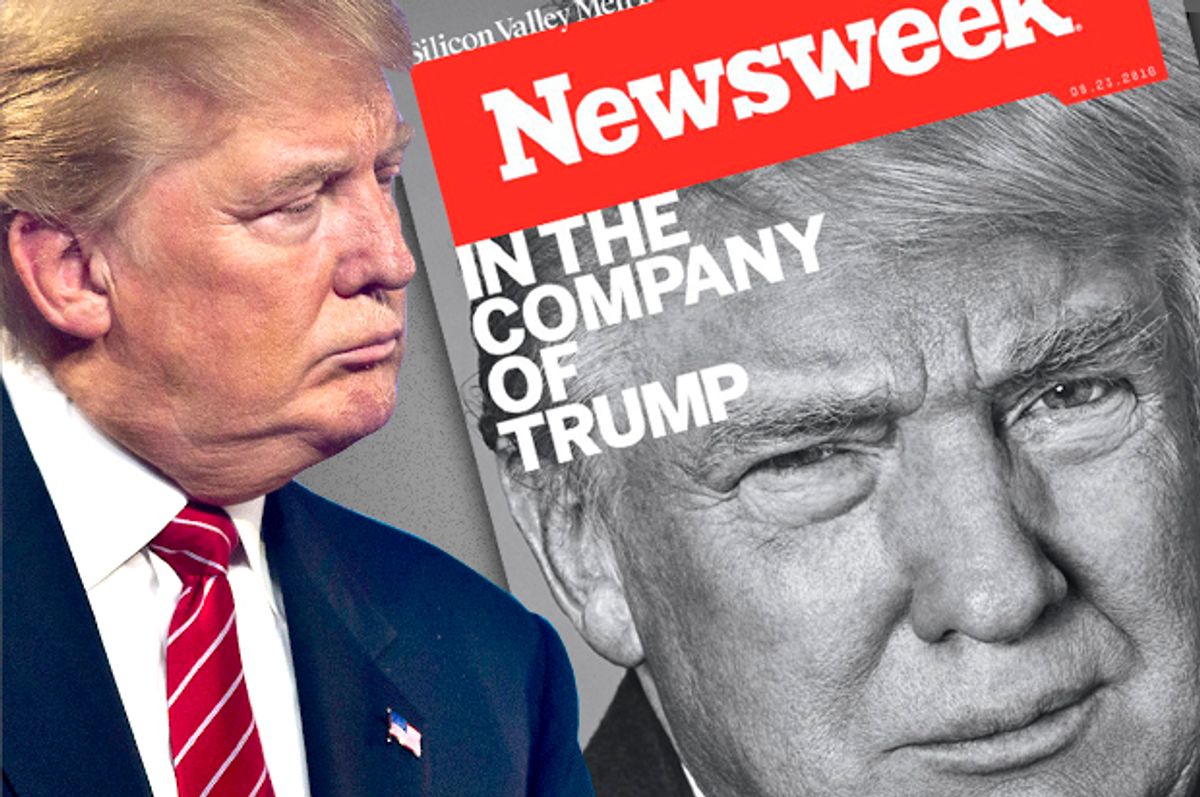 A tremendous amount of the coverage during this presidential campaign has centered around the issue of "transparency." The problem is that this coverage has been tremendously lopsided resulting in a huge misunderstanding on the part of the public and this misunderstanding may put Donald Trump in the White House. The latest Quinnipiac poll asked who voter think is the more transparent, Clinton or Trump, and 54 percent believe Trump is the more transparent to only 37 percent for Clinton. The problem is it's just not true.  Trump is the least transparent candidate in memory and the press knows it.  Why don't the people?

This theme began with the partisan Benghazi investigations in congress from which  came the discovery of a trove of Hillary Clinton's emails and the fact that she had used a personal email while she was Secretary of State. The press spent months pursuing that story without showing any evidence of unethical behavior but Clinton's prickly relationship with the press over the years has led to a presumption of guilt for any possible appearance of impropriety. (This piece by Jonathan Allen explains how that works.)

And then there are the health records. Clinton released a letter from her doctor over a year ago in the same form as Romney and Obama laying out the basic outline of her health issues and attesting to the fact that she is fit for the presidency. Her cough and bout of pneumonia (and a calculated right-wing whisper campaign) brought more accusations that she was refusing to be transparent. She released over 30 years of tax returns, more than any candidate in history. The Foundation has also released all of its financials to the public, Bill Clinton will give up his role and it will curtail all its charitable activities around the world if she wins. Now there are demands that it be shuttered completely so there can be no question of any conflict of interest anywhere.

Meanwhile, Donald Trump has only released what the FEC requires to run for president. He's the first nominee in half a century to refuse released no tax returns at all. (His son let the cat out of the bag this week, however, admitting that he didn't plan to release them because people would ask too many questions. )  Trump's own foundation seems to be some kind of elaborate con in which Trump used other people's money to pass himself off as a philanthropist, taking a few little goodies for himself in the process. There's also good reason to suspect he used it to launder a pay-off to Florida's Attorney General for not investigating his other scam, Trump University (for which he's being sued for fraud all over the country.) He's refusing to release those records too.  He produced an absurd letter from his very strange doctor last fall and then this week went on the controversial Dr Oz's daytime show and released a more professional letter from the same doctor attesting to his stamina and high levels of testosterone.

But nothing compares to the epic conflicts with his privately held company The Trump Organization which, considering the endless yammering throughout the campaign about transparency, has received far less attention than it should have. Some business pages gave a cursory look at the potential complications and reported on how previous candidates handled the matter and running down the legal restrictions that apply. Wealthy candidates have generally divested themselves of any businesses and converted their investments into index funds or cash or put them into a blind trust which is administered by a disinterested party.

Despite all the hours spent before cameras and taking questions there have been remarkably few about this issue. He was asked if he would put his assets in a blind trust at the Fox Business primary debate:

That is asking the people of the United States to have blind trust in him it's not a blind trust.

This week Kurt Eichenwald at Newsweek dropped a bombshell report that should have shaken the campaign to its core but has not seemed to penetrate the noise. He took a look at some of the companies Trump listed on his FEC report and connected enough dots to trace them to various deals around the world. What he found was a labyrinth of business agreements with politically connected oligarchs, tycoons and criminals some of which have been coming together even as he's running for president. These conflicts are so complex and potentially dangerous that unless he completely shuts down the Trump organization he simply can't be president.

There is no way to put it into a blind trust or unwind it, even if it were placed in the hand of total strangers because it's an extremely lucrative branding business, in which Trump licenses his name to various global development projects. Without the Trump name, there is no company. But with a President Trump it's a more valuable company than ever.  Nobody who has watched Trump can possibly believe that he doesn't care about his name and his company and that it would have no influence on his decisions.

He's planning to run the country as an oligarchy, much like the strongmen leaders he's so fond of. He has provided virtually no details and the media have failed to properly follow up.  Once he's in the White House there's nothing they can do. There are no laws against a president doing this because it never occurred to anyone that one would be so bold as to do such a thing.

The New York Times' Nicolas Kristoff wrote yesterday, "when the public sees Trump as more honest than Clinton something has gone wrong."  It's a media failure of potentially disastrous proportions.