Trump vs. the GOP: His economic push is 180 degrees from the party's long-held platform 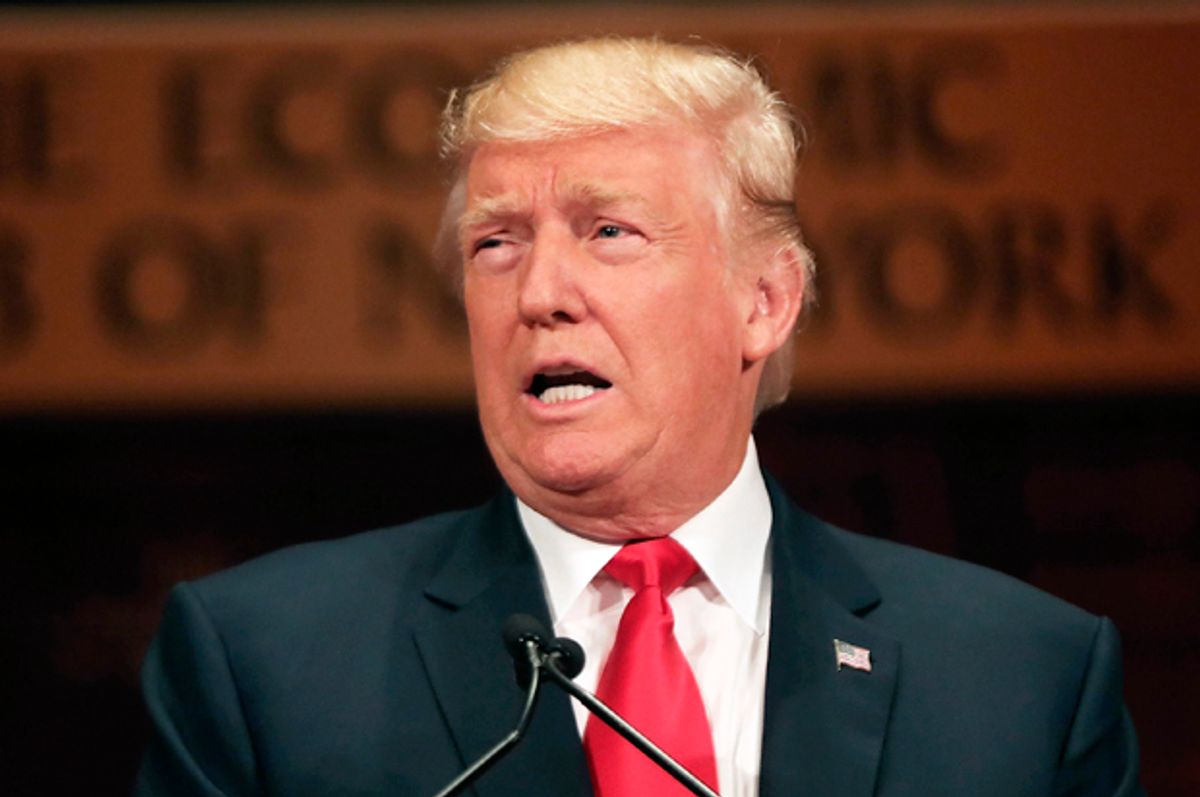 About halfway through what was billed as a major economic policy speech at New York’s Economic Club on Thursday, Donald Trump made a statement that, if this was a normal election, would have sent much of the right side of the political spectrum into a frothing rage.

The three new brackets will be 12, 25 and 33, but low-income Americans will pay no income tax at all – in fact, our plan will remove millions and millions of workers from the income tax rolls entirely.

If you are familiar with right-wing rhetoric, you may recognize this statement as the antithesis of one of the complaints conservatives have unleashed on low-income and working-class people for years. Indeed, it undergirded Republican candidate Mitt Romney’s infamous “47 percent” comment in 2012 — namely, that about half the population has such a low income after factoring in deductions that they pay no federal income tax at all.

These people, in the argot of the right, are moochers and free riders, and their very existence has driven right-wing pundits to stalk them, to take inventory of their possessions to determine if these people really match up with whatever standard of poverty conservatives want to hold them to.

If you want an example of the intellectual bankruptcy of the current Republican Party, you could probably not do any better than to examine the gap between conservative orthodoxy about the tax burden of America’s poor people and the proposal for them that Trump launched on Thursday.

Unless you had been paying attention earlier in the week when Trump's campaign released its proposal for mandatory paid maternity leave for working mothers. The plan might be weak, completely insufficient, and exclude fathers and gay and lesbian couples, but it was a break with the rest of the party. Republicans in Congress were at best skeptical when they heard about it; at worst, outright dismissive.

Even Rush Limbaugh had a hard time reconciling the usefulness of the maternity-leave plan for many of his listeners with his hatred of anything that smacks of big government or compassion for working people.

Or maybe you were paying attention to Trump’s interview with Dr. Mehmet Oz, when the candidate suggested using Medicaid to provide health care coverage to people who cannot afford insurance. This is the idea built into Obamacare that the Supreme Court famously made optional for states, leading many Republican governors to reject the Medicaid expansion that was an integral part of the Affordable Care Act.

In Thursday’s speech, Trump also proposed all sorts of new spending — on infrastructure, which conservatives have resisted during the Obama era, and on rebuilding the allegedly “dilapidated” military, which to the right is like ringing the bell in earshot of Pavlov’s dogs — without corresponding cuts to entitlement programs. Such cuts have been the lodestar of conservative economic policy during the Obama administration (and, to be fair, anytime a Democrat is in office) along with reducing the deficit and the debt.

To be sure, Trump also had plenty of red meat for the GOP. He proposed slashing the business tax rate from 35 percent down to 15 percent, a rate 10 points lower than even what was in Romney’s plan in 2012. He also talked about taking an ax to regulations on everything from food safety to coal-fired power plants. So maybe E. coli will get us all before global warming does.

Tellingly, much of the Republican Party has remained quiet about Trump’s proposals unless you asked members directly. Though there were exceptions, like with “reformicon” Ross Douthat, who tweeted this analysis of Trump’s tax plan. Sure, the candidate is empowering white supremacists in a country growing demographically less white by the hour, but how about those low tax rates!

The reaction or lack thereof by party leaders to these proposals highlights the vacuous nature of Republican politics in 2016. It also represents what I fear is going to be a lost opportunity for a serious debate about what kind of economic policies this country will adopt going forward.

Past elections might have been about small versus big government. The economic struggles of the past few years, still-high health care costs and worsening income inequality have made a solid case for the latter. Had the GOP nominated for the presidency someone serious who put forth some of these proposals, it might have been a sign the country is at least on track to stop and even roll back some of the extremism that has captured Congress over the last decade.

But no such candidate emerged in the GOP primaries. Now the election has become about whether we are going to elect as president a small-d democrat or a racist authoritarian. If GOP voters do not abandon Trump out of disgust with his social attitudes or even with his not totally conservative policy ideas — and they will not — the party might be able to write him off as a fluke for future elections, then go back to pitching the same old garbage policies and dog-whistle politics it has long practiced.

Which would be a terrible result of this election. The anger, racism and disunity for which he is the avatar of the entire Republican base means Trump needs to be hung around the party’s neck like a millstone or a scarecrow to terrify away future generations.