Snowden vs. "Snowden": Oliver Stone's American hero, and the real guy who told us things we didn't want to know

Oliver Stone's movie is a gripping fable of male fall and redemption, but the real Snowden story is much bigger 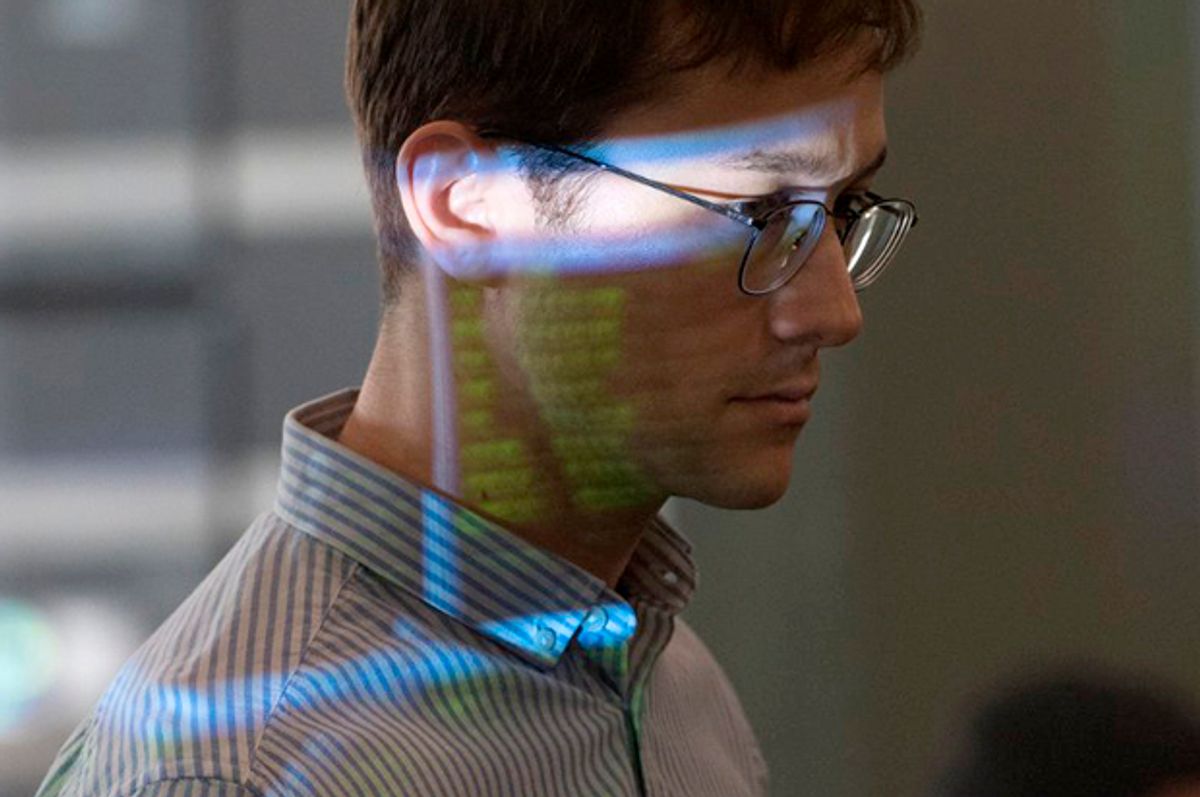 Edward Snowden is an individual with a personal story that is extraordinary in many ways and unexceptional in others, a combination captured well in Oliver Stone’s movie “Snowden.” But Snowden’s individuality was in danger of disappearing behind his symbolic importance even before he spent months holed up in Moscow’s Sheremetyevo Airport as a stateless international fugitive, an event barely referenced in Stone’s movie. As a symbol, Snowden and his deeds — exposing the massive data collection and surveillance programs carried out worldwide by the CIA, the NSA and other intelligence agencies — mean too many things to too many people. Snowden is where the libertarian right and the anarchist left overlap. More important still, Snowden exposes the hypocrisy behind both mainstream conservatism and mainstream liberalism, whose leading representatives have demanded he be punished as a spy or a traitor.

Everyone tries to force Snowden and his story into a narrative that conforms to their view of the world; inescapably, I’m perpetrating my own version of that right now. Philosophers and psychologists may wish to point out that we all do that, all the time, about everything we perceive. Fair point. But this problem, sometimes described in social science as “confirmation bias” — meaning that we are strongly disposed to pay more attention to evidence that supports our existing views — is especially severe when it comes to politics, where it gets doubled in the hyper-partisan and hyper-stupid atmosphere of American politics, and then gets redoubled once we come to the ambiguous case of Ed Snowden.

So perhaps it is because I believe that the political traditions typically described as “liberal” and “conservative” have long since surrendered to idiocy that I think the Snowden case reveals their fundamental incoherence. Conservatives often accuse liberals of being overreliant on the state and deferring to bureaucracy, regulation and centralized power at every opportunity. Snowden’s revelations of the vast scope of government spying, under a Democratic president who had vowed to run the most transparent and most whistleblower-friendly administration in history, suggests that the right-wingers have a point. Liberals, on the other hand, accuse conservatives of being jingoistic authoritarians who talk about “freedom” but in practice favor endless war abroad and a police-state clampdown at home. Given all the right-wing talk-show hosts who called for Snowden to be drawn and quartered in public for revealing an extensive pattern of blatantly unconstitutional government overreach, it would seem that the left has a point too.

Oliver Stone can’t help trying to jam the real life of Edward Snowden into his personal narrative template, the same one Stone has followed since “Salvador” and “Platoon” and “Born on the Fourth of July” — a tale of American heroism at first misguided and then redirected, a tale of masculine sin and masculine redemption. While the movie (written by Stone and Kieran Fitzgerald) is a compelling adventure, one of the better efforts of the director’s later career, I can only wish Stone’s underlying narrative structure were more varied or more interesting. Some people might suggest that a self-professed computer geek like Snowden, who flunked out of Army Special Forces training — because his spindly frame literally couldn’t take it — makes a strange avatar of American masculinity, but that’s not my point.

As portrayed by the method-actor mannerisms of Joseph Gordon-Levitt (highly effective in this case, playing a man whose friends described him as awkward and robotic), the Snowden of “Snowden” moves from post-9/11 George W. Bush patriotism to Barack Obama center-left idealism to the unexplored territory on the other side of disillusionment. That may be correct in some general way, or at least not completely unfair. But I’m pretty sure it leaves out the more complex undercurrents of Ed Snowden’s ideological odyssey: He had been interested in libertarian ideas long before he ever worked in intelligence, for example, and donated to Ron Paul’s presidential campaign in 2008. That straightforward right-to-left trajectory has more to do, I suspect, with a young man from Long Island named Oliver Stone who went to Vietnam as a rah-rah Republican and came home with his faith in America shattered.

Although “Snowden” offers an exciting story of intrigue, along with a useful introduction to the alarming things Snowden learned about government spying — yes, they really can use the webcam on your laptop to watch you get undressed — you will certainly learn more about who Edward Snowden is, and why he did what he did, from Laura Poitras’ gripping documentary “Citizenfour.” I found the areas of overlap between that film and “Snowden” somewhat disorienting, as in the scenes in a Hong Kong hotel room where Snowden first meets Poitras (Melissa Leo) and journalist Glenn Greenwald (Zachary Quinto), who then worked for the Guardian, and shortly before that had been a columnist for Salon. (That may be personal: I know both Greenwald and Poitras, and while Leo is playing a more generic “documentary filmmaker” character, Quinto’s impersonation of Greenwald is eerily accurate.)

As in every Oliver Stone film, even the mediocre and muddled ones, there are a few moments in “Snowden” when the director seems about to break free of his dominant mode of social-political realism into a different kind of representation or expression. When we watch Gordon-Levitt as Snowden driving home to his cookie-cutter house in suburban Honolulu, on a day when he’s on the verge of stealing the NSA’s most sensitive secrets and fleeing the country, we can feel Stone stretching toward a more satirical or allegorical portrait of America, in which that banal surface of SUVs and surfboards and endless sunshine is a thin overlay atop a realm of darkness.

That man-behind-the-curtain obsession is Stone’s great strength and also his great weakness — whether he’s addressing the reasons the Vietnam War was waged, the murky prehistory of the JFK assassination or the ways money is made or lost on Wall Street, he constantly assures us that the unknown unknowns and dastardly deeds are more important than the world we can see. Stone is at least sometimes right about that: Snowden’s revelations, and the public’s eagerness to demonize him and forget about the whole business as rapidly as possible, has made clear that there are vast areas of government operations we know almost nothing about and that most people don’t want to know anything about. The patrician CIA spymaster named O’Brian, played by Rhys Ifans in the film (his name almost certainly a nod to Orwell’s “Nineteen Eighty-Four”), assures Snowden at one point that the American people don’t really want freedom, they want security. If that’s become a political or sociological truism, that doesn’t mean it’s not true.

Ultimately, every Oliver Stone movie becomes, well, an Oliver Stone movie, meaning a Joseph Campbell-lite tale of a young hero’s journey from faith to loss to redemption. Whether you choose to view the real story of the real Ed Snowden in those terms, or his uncertain life in Moscow exile as heroic, is up to you. Snowden presents a rare moment of unity for Hillary Clinton and Donald Trump, who have both called for him to return to the United States and face trial under the Espionage Act, which could easily send him to prison for decades. Trump has repeatedly called for Snowden’s execution (except when suggesting that maybe Snowden could hack President Obama’s private records), which is especially incoherent given Trump’s efforts to embrace the GOP’s libertarian fringe and his ludicrous pledge that the government will never spy on American citizens under his administration.

Clinton’s position simply reflects the standard Democratic-schoolmarm attitude to all forms of radical dissent: In effect, get a haircut and sign a petition. She was “puzzled” that Snowden felt he had to leave the country, and has suggested that some sinister agenda drove him to Russia. That is somewhere between a misleading insinuation and an outright lie: As Clinton knows better than almost anyone, Snowden was forced to remain in Moscow, instead of flying onward to Latin America, because the State Department revoked his passport. If Snowden was “concerned” about government spy programs and “wanted to be part of the American debate,” Clinton has said, he could have done that “at home.” Ask Chelsea Manning how participating in the American debate worked out for her, Madam Secretary.

Meanwhile, Libertarian candidate Gary Johnson and Green Party nominee Jill Stein, despite radically different views of the state and society, have both said they would pardon Snowden. Bernie Sanders has repeatedly described him as an American hero, although he’s not likely to raise the matter again while stumping for Clinton during the fall campaign. But none of those people will ever be president, and neither will anyone else — at least not during our lifetimes, our children’s or their children’s — who openly opposes the dark powers of the deep state, and is willing to say that we needed to know what Edward Snowden told us.