"Stack the bodies outside the door": Pollution, contamination and the toxic legacy of the Iraq War on the Iraqis themselves 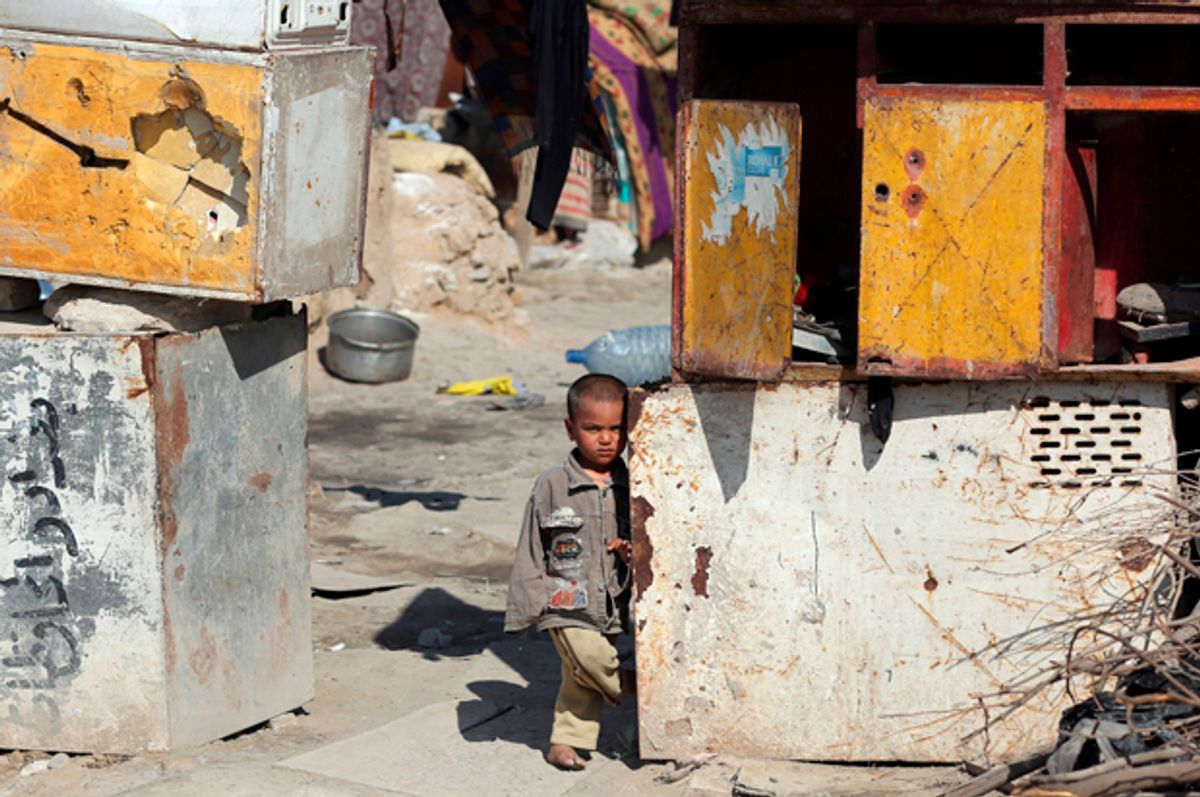 In “Last to Die,” his protest song against the war in Iraq, Bruce Springsteen sings, “We don’t measure the blood we’ve drawn anymore. We just stack the bodies outside the door.”

When the U.S. government and the world’s most lethal military force subject an entire country to torture and torment, the wounds fester long after bored Americans direct their attention elsewhere, and explosions and bloodshed, thousands of miles away and across the ocean, fail to attract news cameras.

The American people and their politicians might have moved on from Iraq, but the American presence of violence and devastation still hurts and haunts the lives of Iraqis. As a direct result of the U.S. invasion and occupation, Iraqi children now have high levels of lead contamination, and pregnant women and the elderly population suffer from expensive and painful health problems. There is an epidemic of birth defects and disabilities throughout the beleaguered country, but much of the world, and especially the U.S., continues to ignore the health crisis and moral catastrophe.

The casualty count, even if the war is over, continues to rise. Bombs and bullets damage the lives of millions of Iraqi civilians, subsequent to their detonation, and penetration of human skin. In America, the war in Iraq is too often reduced to a “mistake,” but for Iraq it is a merciless reaper that will continue to visit the homes of innocent people for generations.

Mozhgan Savabieasfahani, winner of the 2015 Rachel Carson prize, is a toxicologist, author and researcher at the University of Michigan. Since 2004, she has organized research expeditions in Iraq to measure the contamination and pollution that's causing widespread sickness and death. Her team’s conclusions should horrify any thoughtful and ethical person and galvanize the entire world, with U.S. leadership, to react immediately and aggressively to save the lives of Iraqi children. Just as America is responsible for the war in Iraq, it is responsible for its consequences.

I recently interviewed Savabieasfahani via email about her work.

What was the impetus for you and your researchers to study the level of lead contamination in Iraqi children and the long-term health impact of pollution resulting from the U.S. invasion of Iraq?

Members of our scientific research teams are also victims of the U.S. wars in the Middle East. We have lost family members to cancers, heart disease and birth defects. We are grappling with miscarriages, infertility, and multiple abortions. We are witnessing rising public health issues in Iraq and also in neighboring Iran where war contamination arrives by air and dust from Iraq.

Our drive to continue our research is rooted in having been personally affected by the U.S. invasion of Iraq and the multiple wars that have followed that invasion.

If we are to reduce the exposure of the Iraqi population to war pollutants, and if we are to protect the future health of mothers and children in the whole of the Middle East, we must investigate the consequences of U.S. wars in the region, publicize the results of war contamination and hope that public knowledge will prohibit such war-mongering behaviors in the future.

How have you conducted your research, and what troubling discoveries have you made?

Our research has been conducted by teams of Iraqi and Iranian physicians, health workers, and environmental scientists who detected rising health issues in the Iraqi public as early as 2004. Since then, we have studied the populations of three Iraqi cities which have been bombarded repeatedly, which are surrounded by multiple U.S. military bases, and which are in close proximity to areas where the U.S. military detonated thousands of chemical weapons.

Pollution created and released by these sources lingers in the environment, enters the human body through food, water and air, and affects the health of the population. The most vulnerable populations (pregnant mothers, growing children, and the elderly) are most severely affected.

What are the health consequences for Iraqi children and adults that will result from the levels of contaminates and pollutants in the air?

We have found lead contamination of children in three Iraqi cities which we studied. Our most recent paper describes Iraqi baby teeth with lead levels up to 50 times higher than in the baby teeth we collected from Lebanese and Iranian children. Additionally, we have detected high levels of lead in hair and nail samples from Iraqi children.

Lead is a potent neurotoxin. In utero and childhood lead poisoning has serious impacts on fetal development and childhood health. A fetus can absorb lead from the mother’s blood. Such exposures can impact multiple biological processes in the newborn or cause deadly birth defects. We know that low levels of lead can reduce children’s IQs and cause other adverse neurological effects. Childhood lead exposure compromises the child’s intelligence, memory, behavior, and overall life achievement. Additionally, societal costs can add up to billions of dollars.

Considering the irreversible, life-altering, costly, and disparate impact of lead exposure, we must opt to eliminate children’s exposure to this toxic metal altogether.

How is the U.S. invasion of Iraq responsible for the high levels of contaminates and pollutants?

Bullets and bombs deliver lead and mercury into the targeted environment. We see public contamination with these two toxic metals in all three Iraqi cities which we examined.

Is there also observable injury to American military men and women?

Thousands of American veterans have returned from invasion and occupation of Iraq with multiple health problems including respiratory ailments, cancers, and reproductive issues.

Have you had difficulty placing this story with the U.S. press? If so, why do you believe that the American media is ignoring such an important crisis?

Our research has been virtually ignored by the U.S. mass media.

The U.S. news media acted largely as a stenographer for the United States military, and for the State Department, before and during their wars on Iraq and Afghanistan. Today, the same news media have a profound disinterest in the massive damage which they caused by promoting these wars. The U.S. media’s distaste for examining the consequences of U.S. wars in the Middle East extends all the way down to the smallest of the metropolitan newspapers.

What measures do you suggest that the international institutions of global authority, and the American government, which is ultimately responsible for the problem, take to combat the effects of lead contamination in Iraq?

Our aim is to eliminate children’s exposure to toxic war contaminants. As a first step, remediation of U.S. military bases in Iraq is necessary to remove toxic residues from these installations. That aim has already been presented to the U.K. Parliament and discussed by members of the Parliament.

In both March and May 2016, we introduced two Early Day Motions in the U.K. Parliament entitled "CONTAMINATION OF WAR ZONES." Approximately 30 members of the U.K. Parliament have signed each of these Motions, which call for "the [U.K.] Government to work with the U.S. to take the necessary action to clean up areas polluted by the allied military forces [in Iraq and Afghanistan]."

Additionally, our research has been the basis for an American Public Health Association (APHA) 2015 Policy Statement entitled "Cleanup of U.S. Military Burn Pits in Iraq and Afghanistan." This Policy Statement urges Congress to pass legislation requiring the United States armed forces to repair ecological damage created as a byproduct of invasion and/or occupation. It specifically urges the remediation of the areas affected by burn pits in Iraq and Afghanistan.

Similar calls by professional bodies can put pressure on the U.S. government to clean up war pollutants in the Middle East.