Playing by different rules: The media lets Trump "get out of jail free" but won't let Clinton "pass go"

The press slams Clinton based on pre-2016 political standards, while Trump is judged on a much lower bar 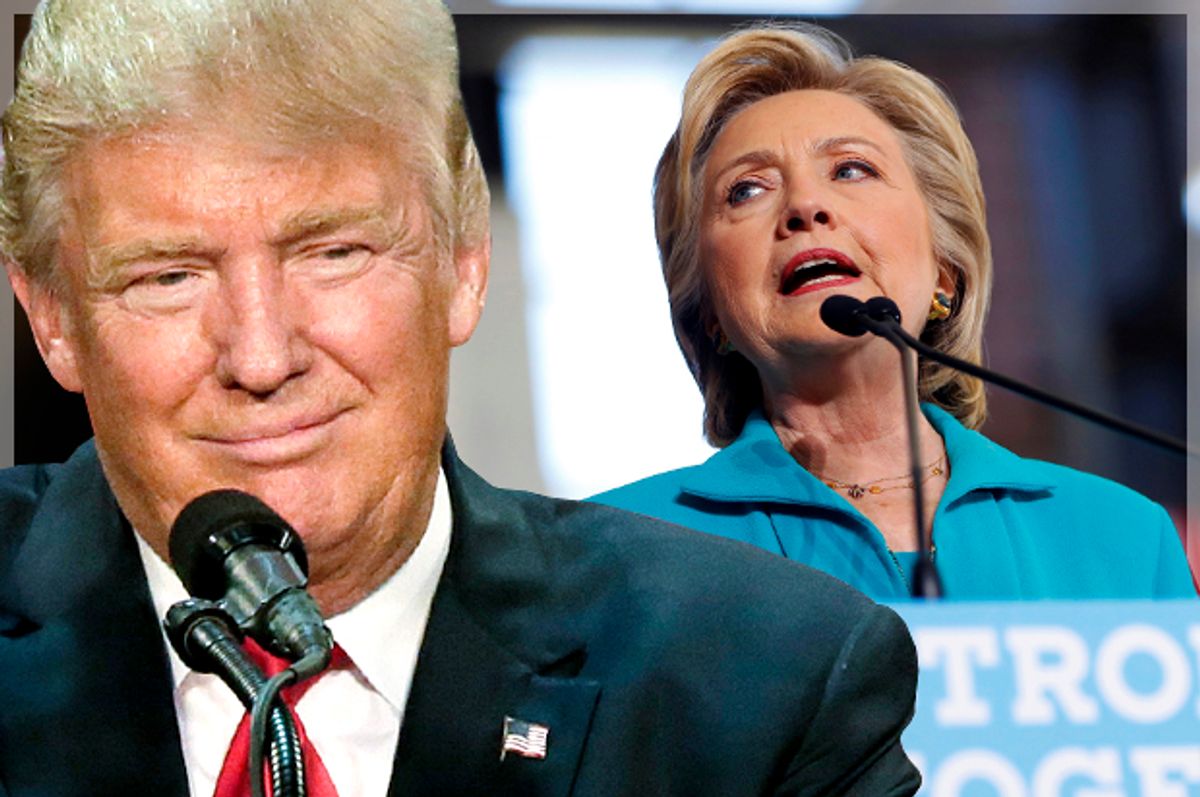 The only explanation for the lopsided coverage of the election by the political press so far is that, for some mysterious reason-defying logic, there's a "false equivalence" at work. It's become an almost throw-away phrase, bearing little weight these days. The political press certainly doesn't take it too seriously, that's for sure. We're just gaming the refs, they say. Someone's always bitching about the media, they say. Whatever helps them sleep at night, I suppose.

Nevertheless, according to what we're observing online and via cable news, Hillary Clinton's negatives appear eons more grievous than Donald Trump's missteps, even though they're not — and this disparity unfairly elevates Trump and his poll numbers. This is how elections are tilted toward despots and undisciplined strongmen. They're legitimized and humanized despite their long menu of unprecedented gaffes, lies and treachery.

For some time now, I've been attempting to define the specific differences in the political press' coverage of Clinton and the coverage of Trump. There are several underlying factors at work here. But the broad stroke imbalance is specifically due to the fact that the news media is evaluating Clinton based on pre-2016 political rules, while Trump has been operating under his all-new 2016 political rules. And the press has mostly sanctioned those rules.

Put another way: Clinton's triumphs and gaffes are being observed and reported through what we've all come to know as canon for presidential campaigns in the modern era. Candidates running for president, prior to the ascendance of Trump, have always been expected to do and say certain things in order to successfully participate.

If they deviate from any of these rules (and there are many other rules and traditions) they're pilloried by cable news talkers and political reporters who are career motivated to feed dramatic beef to the ratings beast.

Meanwhile, Trump has mostly rejected the rules, despite his recent embrace of teleprompters. As a matter of routine, he tramples the pre-2016 rules multiple times a day — not just minor glitches, but words and actions that, according to those rules, would have collapsed his numbers if not driven him out of the race entirely, as it has with so many candidates before.

But because he managed to win the nomination and is polling within the margin of error against Hillary, due to the existence of "liberal media bias" and the fact that the press desperately needs as much conflict and uncertainty as possible to remain competitive, he's allowed to skate by without being held to the same pre-2016 rules as his opponents. That's his opponents plural, including his Republican primary opponents who were also held to old-school, pre-2016 standards of behavior.

Clinton was almost universally criticized for failing to disclose her pneumonia diagnosis for two whole days. Her dizzy spell during the 9/11 commemoration ceremony was treated with "Special Reports" that broke into regular programming, with endless conga lines of political analysts rending garments over why, oh why she never tells them anything and whether her temporary illness would end her campaign and deliver the presidency to Trump.

As a direct consequence, Clinton's numbers have continued to dip, while Trump's numbers are undeservedly surging. Again, she's been held to rules established in 2004, 2008 and 2012 about health disclosures and transparency, even though she released full medical records 13 months ago no less, from reputable doctors in accordance with how all presidential candidates have done it in the modern era.

Imagine for a moment if Clinton adopted Trump's behavior and crapped all over the pre-2016 rules upon which her campaign is being evaluated? Cable news people couldn't scramble to a television camera fast enough to declare her candidacy over. That would be the kind part. It'd be quickly followed by Day 2 stories about how Clinton has lost her mind. Trump, on the other hand, gets away with this every damn day — literally.

What about Trump? Unlike Clinton, he's yet to fully disclose his medical history (or his tax returns). Instead, he initially released a letter from a kooky doctor who looks like a background character from "The Simpsons." Both Trump and the doctor, Dr. Harold Bornstein, insisted that the obviously suspicious letter accurately described the Republican nominee's medical condition, including the part about being "the healthiest individual ever elected to the presidency." Sorry, that's total bullshit.

Months later, Dr. Bornstein confessed to NBC News that he wrote the letter in five minutes based on Trump's directives while he waited outside in his limo. Making matters even worse, Trump released a second letter on Thursday, also composed by Dr. Bornstein, via the disreputable Dr. Oz television show (another violation of pre-2016 rules), and predictably it was almost as bogus as the first one.

Trump's weight was reported as significantly lower than it actually is. Bornstein wrote that Trump weighs a relatively svelte 236 pounds, even though he appears to weigh closer to 300. Likewise, Trump's height jumped from 6 foot 2 to 6 foot 3. It's worth noting that according to the Centers For Disease Control, if Trump's weight, 236, isn't a lie, then a 6 foot 2 Trump would be categorized as "obese" by the CDC's standards. But if he were to magically grow by an inch to 6  foot 3, while remaining 236 pounds, then he slips into the less dire "overweight" classification. Convenient growth spurt for a 70-year-old man.

Am I overthinking Trump's numbers? Maybe. But, hell, no one in the traditional political press is investigating it, despite Trump's long history of brazen mendacity and his previous history with suspicious Bornstein letters. Mark Halperin isn't looking into it. Neither is Chris Cillizza, Andrea Mitchell or Jake Tapper.

No one's asking how Trump grew by an inch. No one's asking how a 70-year-old man — a man who eats fast food because, as he laughably told Dr. Oz, he "knows what's in it" — has a prostate specific antigen number, 0.15 nanoliter/microliter, that's remarkably lower than the lowest end of the normal range for a white man his age. (The normal range for a man of Trump's age is zero to 6.5 nanoliter/microliter.)

Why is Trump getting away with this, while Clinton's health and transparency was scrutinized and concern trolled for the better part of a week?

There are different rules. Indeed, the reaction to Hillary's pneumonia and dehydration episode would be fine if Trump's hinky medical reports, as well as his obesity and everything else, were discussed through the same prism and with the same level of urgency. But his disclosures, on top of the laundry list of horrible blurts and ludicrous statements, are barely if ever scrutinized by anyone outside of three or four liberal-leaning MSNBC hosts, as well as an array of liberal blogs and social media personalities, very few of which reach the eyeballs of undecided voters.

We'd be more sympathetic to a "both sides" equivalence in political coverage if the press actually held both candidates to the same set of pre-2016 rules — rules that have been applied to every candidate in every election year until Trump arrived on the scene. In doing so, however, the press would have to accept and own that Trump is a far worse violator of the rules than nearly all other presidential candidates combined. And the view from the outside would be that Trump is called on the carpet significantly more often, thus incurring the wrath of Trump supporters who continue to insist there's a liberal media bias.

But it's the avoidance of those accusations by the press, combined with the demand for horserace drama, that's forced it to unfairly and dangerously apply separate rules to each candidate, egregiously offering Trump far more latitude than previous contenders.

To paraphrase Jon Stewart, it's hurting America. And there's no sign of stopping.