Jon Stewart resigned, Trump is a joke and Larry Wilmore got canceled: Understanding the power of political satire this election 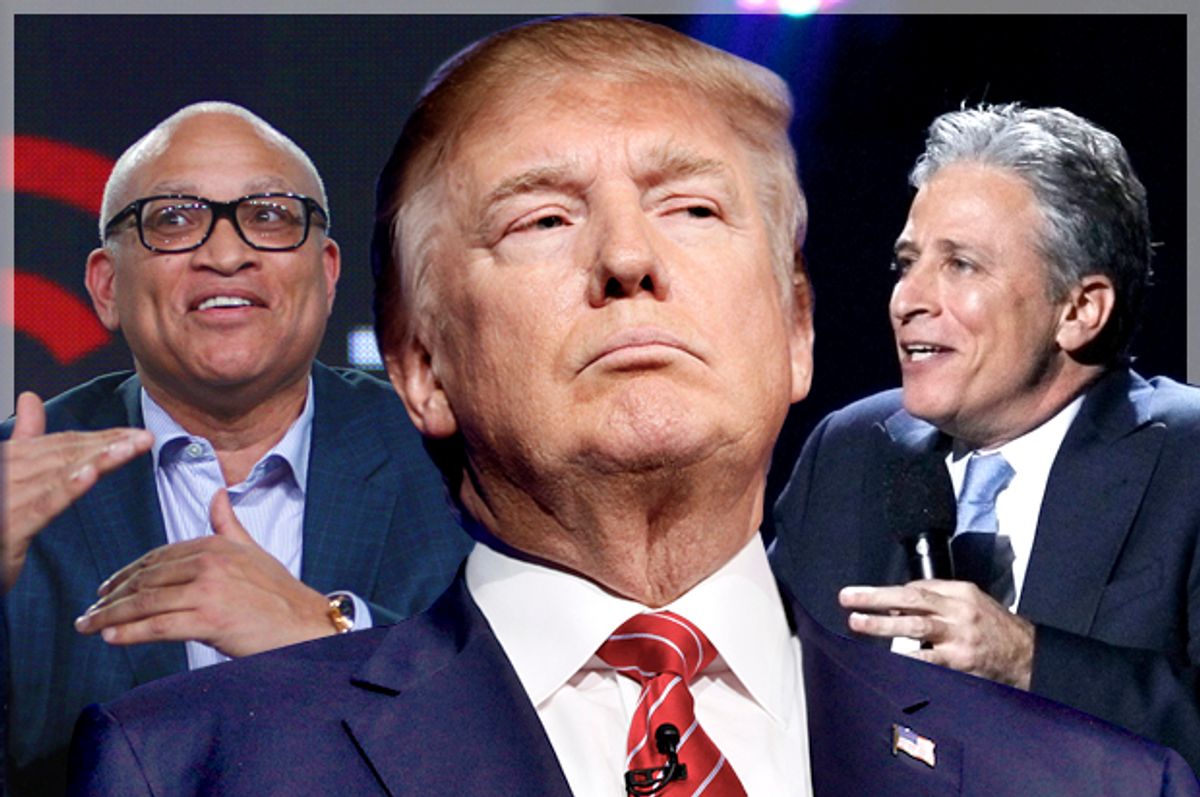 It’s fun to speculate that if Jon Stewart were still at the helm of "The Daily Show" that he would have gotten rid of Donald Trump by now. We can fantasize about that one eviscerating bit that we all want that would have finally been the end of the Donald. But the truth is neither Stewart nor any political comedian is going to make a dent in Trump’s run and here’s why: You can’t make a joke out of a joke.

Trump is already a mockery. That means that most of the standard arsenal available to the political comedian — parody, irony, sarcasm, etc. — won’t work. Remember when Stephen Colbert on "The Late Show" asked Trump to identify which statements he had made and which were made up? It was funny but it didn’t have any impact because we already knew that Trump’s statements are crass and bombastic.

It’s hard to go after Trump because in today’s world of polarized politics and amid constant screams of bias, political comedians have to deal with the idea that they are not being “balanced.” How one is expected to show “balance” covering Trump is anyone’s guess.

The fact remains, though, that the shrill screams that comedy is biased have been having an effect. Time has reported that the “new politics of late night” are such that comedians are more openly taking sides. And yet, the idea that political comedy is more partisan today is nonsense.

It’s nonsense because political comedy, by its very definition, is partisan. And while it is true that satirists tend to sway to the left, their real affiliation is not to a party or candidate but to reason, sanity and sound arguments. Sure, Samantha Bee is a whole lot edgier than Stewart was, but they both share a commitment to calling out bullshit and getting angry at stupidity.

That’s why Bee’s most intense pieces on the presidential race have not focused on Trump or other alt-right candidates as much as the lunatics who form their base of support.

Thus the real common ground for political comedy is the combined commitment to expose faulty thinking. Political satire isn’t about promoting or defending a candidate: It’s about asking the audience to wake up and stop buying into the party line. Political satire doesn’t tell you what to think. It asks you to start thinking for yourself.

That is what defines the interesting political comedy landscape that we find ourselves within in the post-Stewart era. John Oliver, Samantha Bee, Seth Meyers, Larry Wilmore and even Trevor Noah may have gone after Trump on their shows. But the real goal was not to attack Trump's character; it was to deflate the force of his bigoted and irrational positions.

The problem is, though, that Trump’s supporters are deaf to these calls to reason. They are likely to consider any biting satire of their candidate’s platform to be yet another example of “media bias.”

That's why the real political power of satire today is aimed less at specific candidates and more at the system that lets that candidate rise.

It would be hard to find a more politically passionate satirist than Lee Camp, whose "Redacted Tonight" on RT America continues to build a growing audience. Camp is an excellent example of an activist comedian and he’s been referred to as “Jon Stewart with teeth.” His shows are as much about exposing news and information that's been “redacted” from public discourse as they are about being funny.

But the key is that Camp has focused his satire during this election on the rigged system and the corporatocracy.  That has meant that he has gone after Trump and Hillary Clinton in equal measure, reserving some of his most vicious attacks for the corruption in the Democratic National Committee. Camp’s comedy has proved that some of the most interesting satire of this election cycle has focused less on the personalities and more on the system that produced two of the least liked candidates in our nation’s history.

The other trick for understanding the comedy landscape during this election cycle is that we have to distinguish between satire and mockery. Satire is a politically incisive form of comedy that's meant to shake your perceptions, unmask abuses of power and call attention to the way we accept the absurd as the everyday.

Mockery, on the other hand, is what Jimmy Fallon does when he makes fun of Donald Trump’s hair. You might find it funny, but it isn’t political comedy. And if you take the joke even further by asking the candidate if you can play with his hair, you might get laughs while helping make a horrible candidate look palatable. We might call that comedic blowback. Either way, it has nothing in common with satire.

Late-night comedy is populated by both frat-boy-type humor and politically edgy humor but they are not the same and don’t yield the same results. Silly comedy is funny but has little, if any, political impact; political comedy is often more cerebral and more powerful in changing the way the audience thinks.

And that is, of course, part of why we lost Larry Wilmore’s "The Nightly Show." Looking beyond its ratings struggles, one finds that its comedy became less in sync with some of the silliness that attracts audiences on other late-night shows. Wilmore’s show, though, was the one source of political comedy that consistently exposed systemic racism, sexism and xenophobia.

It's fun to imagine that Wilmore could have built the same sort of following as Colbert did in the same time slot, but he simply wasn’t given the time or the resources to do so. Despite the fact that we have ample sources of satire from a range of media sources, the show’s cancellation remains a huge loss.

There is another source of satire that can’t be overlooked. And that is the huge presence of citizen satire on social media. Today more than ever, average citizens use hashtags, memes and other social-media interventions to interject sanity into the political conversation. There is evidence that parody social-media accounts are popping up with more frequency during this election than ever before. The great news for our democracy is that this satire is literally part of a public movement to expose flaws in our system and call out the ridiculous candidates it generates.

So will any of this satire make a difference? Can the comedians save us from this joke of an election? The answer is yes — but not in the ways that we dream of.  There isn’t going to be that one joke that finally puts Trump out of the race. If Oliver’s brilliant “Drumpf” exposé didn’t do it, nothing will.

The real battle during this election, though, isn’t between Trump and Clinton; it’s between delusion and sanity, between lies and reality. No matter who wins in November, this nation is going to have to deal with a huge reality check. And that’s why we can thank the satirists for being the consistent sources of reason in a field dominated by farce.