The worst kind of cop out: Of course the Fraternal Order of Police endorsed Trump 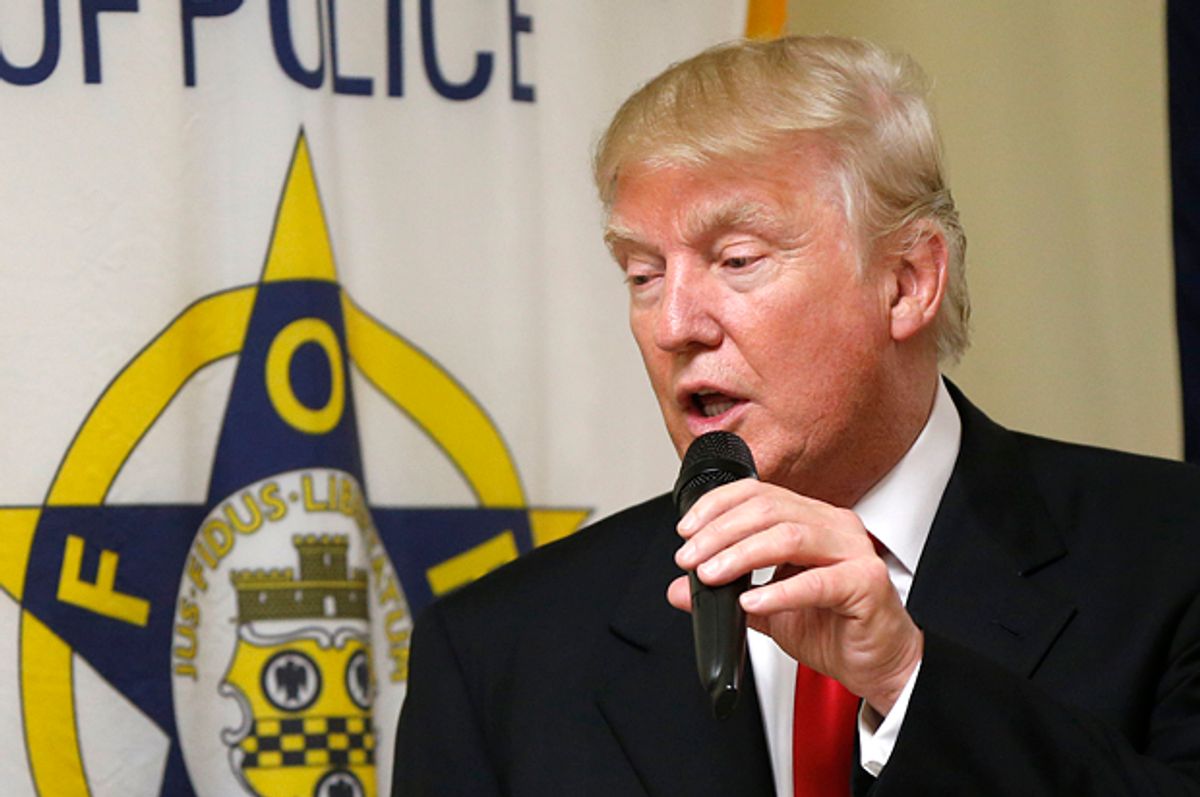 The only surprising thing about National Fraternal Order of Police endorsing Donald Trump is that it took them this long. After all, The National Border Patrol Council announced their support in March, rewarding the Republican nominee for his declaration that Mexico is sending rapists to the United States. Since its inception, the Trump campaign has embraced the Nixonian bargain that exploiting racialized fear over crime and violence can win support from the “silent majority” for a candidate pledging law and order.

“The crime and violence that today afflicts our nation will soon, and I mean very soon, come to an end,” said Trump in a Republican National Convention speech accepting the party’s nomination that was reportedly inspired by Richard Nixon’s 1968 address. “Decades of progress made in bringing down crime are now being reversed by this Administration's rollback of criminal enforcement.”

Just as Nixon made it abundantly clear what he meant by saying that the right to be free from violent crime is “the first civil right,” Trump doesn’t have to spell out exactly what kind of person President Obama is failing to imprison. Trump, like Nixon, has also taken a page from George Wallace, who seamlessly shifted from “segregation forever” to a call for law-and-order, lamenting the state of a world in which an assailant will “be out of jail before you’re out of the hospital, and on Monday morning, they’ll try the policeman instead of the criminal.”

Today, a sharp uptick in murder rates in a small number of cities, against the backdrop of mass shootings and bombs scattered across metro New York, is lending Trump and his allies a rare fact that they can shamelessly distort to erroneously claim that crime is “through the roof.” In reality, there are very serious but locally specific problems in cities like Baltimore and Chicago. Overall murder and crime rates are still way down from the early 1990s. Contrary to repeated and unsubstantiated attempts to blame Black Lives Matter protests for causing street violence—the debunked “Ferguson effect” theory — a new Brennan Center for Justice report finds that “as-of-yet unidentified local factors, rather than any sort of national characteristic” are at fault.

Final 2015 national FBI crime stats will soon be released. Trump will no doubt distort the stats for his own political ends.

And so again, the endorsement is not surprising. What makes it unusual, and receives little attention, is that FOP President Chuck Canterbury seems more clearheaded than his organization’s Trump endorsement would suggest. In particular, he has repeatedly made the point that police cannot solve a crime problem that has deeper socio-economic roots.

“We believe it’s an issue of poverty,” Canterbury told the Washington Post in 2014. “Communities that have distrust of law enforcement — it’s because law enforcement is the only part of government they ever see. They’re poor; infant mortality rates are higher; single-family homes are higher; unemployment is higher; people don’t live as long as the average American. And that is the issue in every community in America that we police. Race is an issue that should have open discussion, but the bottom line is, when you have depressed communities, it leads to higher crime, which leads to more police, which leads to the only part of government they ever see.”

Canterbury is on to something here. But he has embraced a candidate whose economic platform pledges more tax cuts for the rich and demagogic racism that will exacerbate rather than ameliorate the poverty that he believes to be at the root of crime. Canterbury does so in the name of defending rank-and-file officers against a mythical war on cops and, in doing so, only serves to confirm people’s worst suspicions about cops: that they are in it for themselves, and not the people they are hired to protect and serve, and will stoop to any low to defend the worst. The FOP has now stooped to another low (if by no means lower than other lows) in endorsing Donald Trump.

There are many police officers who disagree with the FOP endorsement, just as many oppose local unions’ defense of officers who have committed the heinous crimes against the public. But it’s now more clear than ever that police unions represent the lowest common denominator in American law enforcement, protecting the short-term individual prerogatives of individual officers instead of embracing changes to make the criminal justice system a better place for all involved — police and policed alike. Trump is by no means the first to make dangerous concessions to FOP power: city elected officials, often Democrats, have done that for years by signing off on collective bargaining agreements that can make accountability for misconduct and abuse a near impossibility. Better policing will be impossible until the political power of police unions is crushed.