AfterEllen and the digital media bust: Queer spaces for women are disappearing, even on the Internet

The 14-year-old website for queer women, which editor Trish Bendix calls "a virtual church," will close on Friday 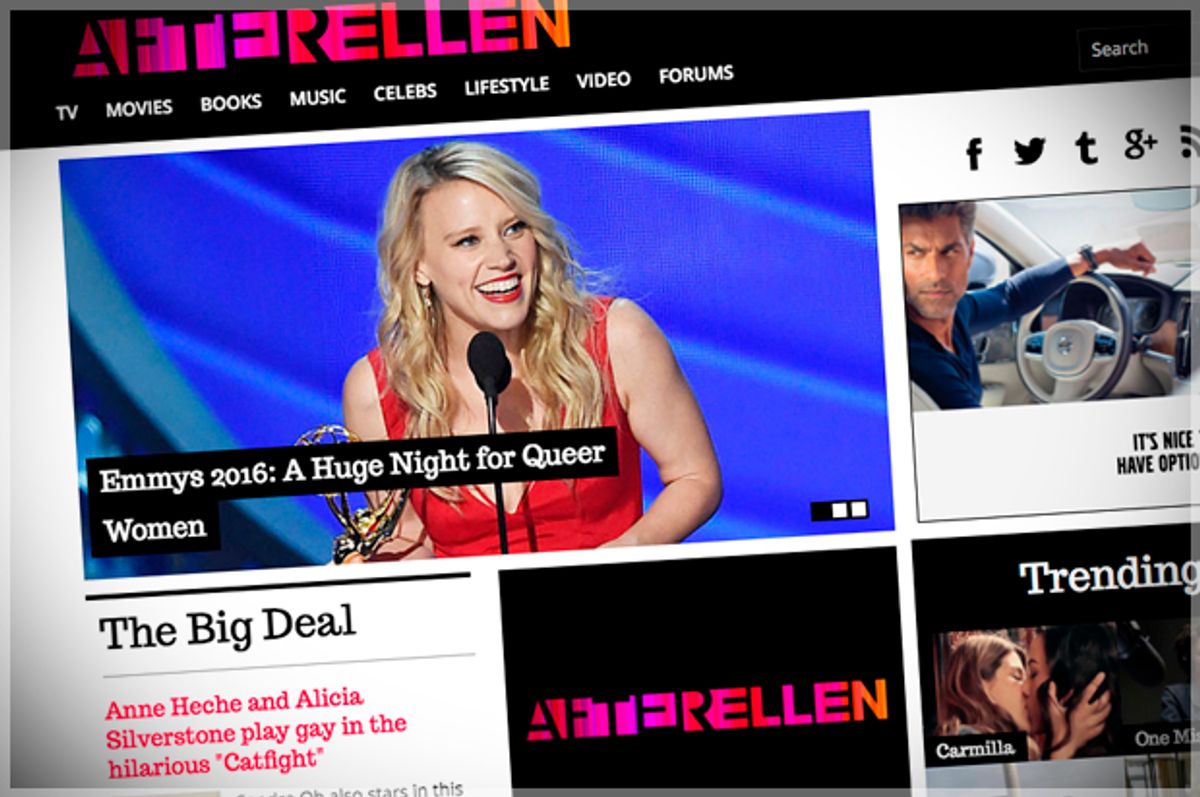 AfterEllen is the latest casualty of what’s been a devastating year for digital media.

The lesbian blog, founded in 2002, will publish its last post on Friday. Founded by Sarah Warn, the website was an early advocate for greater representation in the media for queer and bisexual women, while paving the way for other popular LGBT websites. Four years after the site launched, its success spawned AfterElton, a sister publication focusing on news specific to gay and bi men. That website — later renamed The Backlot — was absorbed by the LOGO-owned NewNowNext in 2015.

According to editor-in-chief Trish Bendix, Evolve Media — which bought AfterEllen from Viacom in 2014 — gave the site two years to reach profitability. “They found we are not as profitable as moms and fashion,” Bendix wrote in a post on her personal site.

The closing of AfterEllen follows a torrent of massive layoffs in digital media. Websites hit with devastating cutbacks include Mashable, The Guardian, Fox Sports, The Oklahoman, International Business Times, Al-Jazeera, The Post Bulletin, Kansas City Star, and yes, Salon. Time laid off 100 members of its web staff — amounting to 1.5 percent of its entire workforce — while Al-Jazeera sacked a staggering 500 employees in March. Even the seemingly recession-proof New York Times offered buyouts to an undisclosed number of staffers. Poynter reports that 49 accepted the offer.

Autostraddle blamed the digital media doldrums on corporate behemoths like BuzzFeed and Vice, which “suck up more of the market and more of the advertising money,” but to paraphrase Notorious B.I.G., mo’ money does not mean fewer problems. Vice recently slashed its entire U.K. editorial team, while laying off 15 people in the U.S. BuzzFeed reportedly missed its 2015 revenue goal by 30 percent.

These cuts were across the board, but media layoffs have a tendency to affect LGBT media the hardest. Mic recently slashed its Connections section, which focused on sex and lifestyle news from a feminist, queer, and intersectional lens. When the Daily Dot laid off 30 members of its staff to double-down on social video production, the Internet-focused website let go of its only dedicated LGBT reporter. Queer websites like Pam’s House Blend and Good As You have also shuttered in recent years, while the independent blog Bilerico was folded into LGBTQ Nation.

Even Autostraddle, the popular trans- and queer-themed website mentioned above, reported that it is difficult to stay afloat in a marketplace unkind to LGBT publishers. “I’m proud that we still exist,” writes Riese, “but we’re often on the brink of not existing anymore, and this job has never been easy. It’s always a struggle.”

That struggle is not exclusive to the media. The truth is that queer public spaces, especially for women, remain vulnerable at a time when lesbian bars continue to shut down across the country, forced out by rising rents and stagnant sales. Lexington Club, the only remaining lesbian bar in San Francisco, closed its doors in 2014, a product of shifting demographics in the Mission District. Although the Bay Area historically has been home to artists and queer misfits, the emergence of Silicon Valley as a gentrifying force has made it difficult for clubs that cater to niche populations to do business. The average rent in San Francisco is currently $3,866 a month.

The list of defunct lesbian bars is getting too long to name, but the departed include the Egyptian Room in Portland, Tink’s Pub in Louisville, Sisters Nightclub in Philadelphia, Peg's Place in San Francisco, T’s in Chicago, Chances Bar in Houston, and Bullfishes in Cincinnati. Washington D.C., which has the highest concentration of LGBT people in the U.S., has no active lesbian nightclubs, at least following the closure of Phase 1 in 2015. GayCities New York counts 65 bars for gay men, and just three for queer women.

The Huffington Post’s Jen Jack Gieseking argues that there’s a reason for the nightlife gender gap. “Unlike men, women drink less, age out of using bars, and are also less comfortable with meeting and interacting with other women in these spaces,” Gieseking writes. Conventional wisdom also suggests that when queer women pair up, they are less likely to go out to a bar than gay men in a committed relationship.

A more compelling reason, though, is that many of these potential patrons simply can’t afford the extra expense. In a 2013 study, UCLA’s Williams Institute found that 7.6 percent of lesbian couples are living below the poverty line, a rate that’s 33 percent higher than their heterosexual counterparts. Women in same-sex relationships are nearly twice as likely to receive food stamps than gay male couples, largely due to pay discrepancy in the workplace. Women earn 77 cents for every dollar a man earns, and although there’s no data on the subject, that low pay is likely to be compounded by homophobia. You can still be fired in 30 states for being LGBT.

The decreased purchasing power of queer women also impacts digital spaces. If lesbians and bisexual women have less disposable income, these populations are viewed as being less attractive to prospective advertisers. It’s notable that while a number of popular gay blogs continue to be profitable and successful — including Queerty, JoeMyGod, and Towleroad — their female-centric counterparts are nearly non-existent.

Whether its a blog or yet another bar closure, the disappearance of these spaces amounts to the continued erasure of queer culture. With so few remaining physical places that lesbians and bisexual women have left to call their own, websites like AfterEllen take on an even greater importance as a place to find community and discover yourself. “AfterEllen is just one of the homes lesbian, bisexual, and queer women will have lost in the last decade,” Bendix writes. “It was a refuge, a community, a virtual church for so many. I’m not sure that some people outside of us can really ever understand that.”

AfterEllen’s archives will remain online for the foreseeable future, but its loss is simply incalculable. 2016 been a terrible, horrible, no good, very bad year for ailing digital publishers, but for queer women, the trend is awfully familiar.